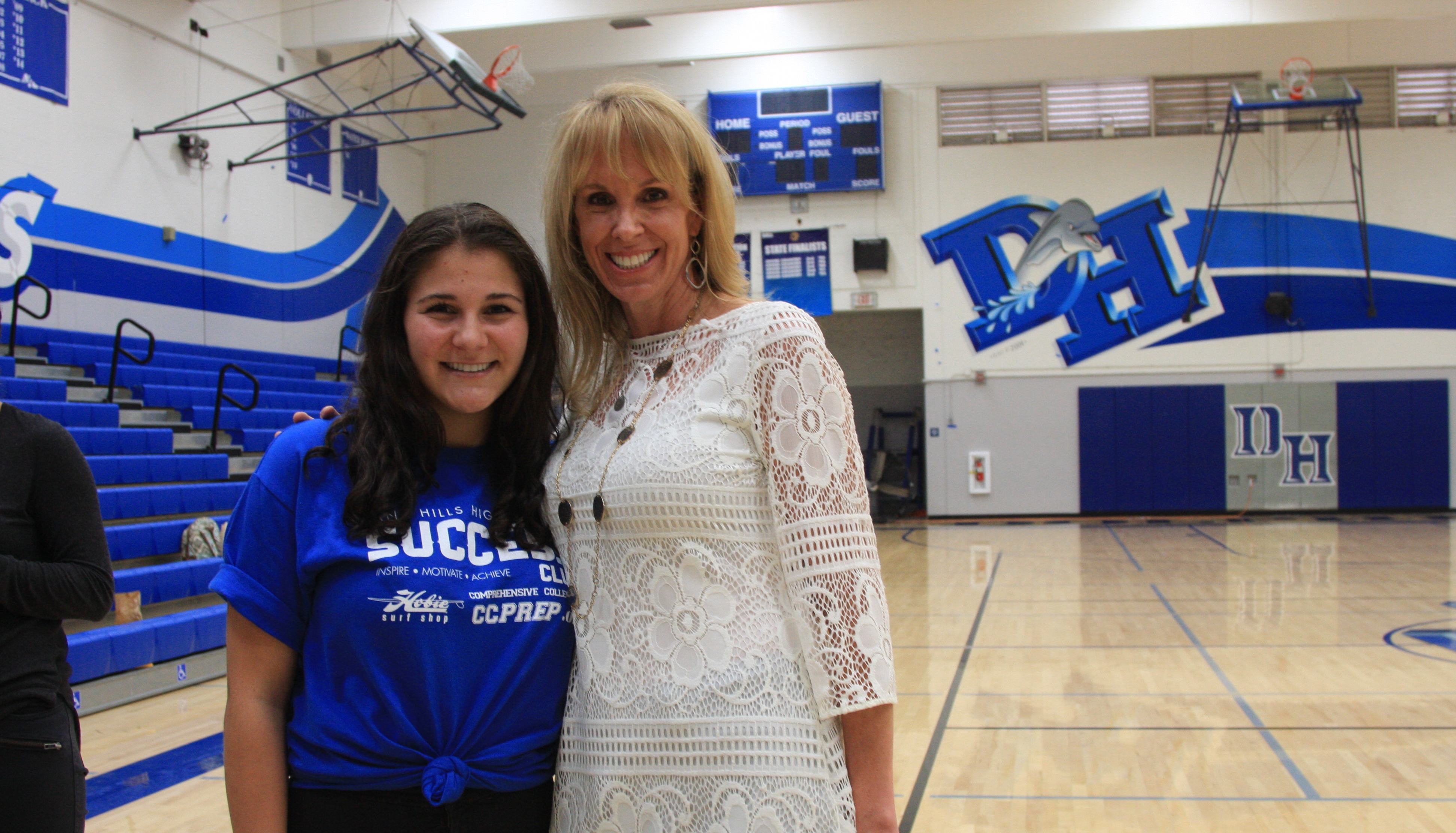 The word “success” defies a singular definition, as it can mean many different things depending on whom you ask. But no matter how you define it, everyone can use a little extra motivation.

With that in mind, Dana Hills High School student Cassie Braunstein has continued the mission her sister Eliza Braunstein and Allie Gersten started in 2011—the Success Club.

The idea was originally hatched during a family road trip when the discussion became centered on an observation by the eldest Braunstein sister, concerned by friends who had a lot of potential but were failing to take advantage of it. With an idea and a teacher willing to support the club as faculty advisor, the Success Club was launched.

The club format was designed around the premise that by bringing in a wide variety of successful people as guest speakers, students could glean what they need from their stories—inspiration, motivation and practical strategies for success.

And it worked. The club quickly became one of the most popular on campus. It didn’t hurt that the lineup of guests included professional athletes and rock stars, but even those with less glamorous sounding jobs such as CEOs of large corporations and entrepreneurs who started from scratch, attracted a large turnout.

The timing was right for Cassie Braunstein to take the lead in 2012, her freshman year, after her sister graduated that spring.

Now a senior, Braunstein is relishing her final months at the helm, endeavoring to finish the year strong, bringing an exceptionally interesting and inspirational lineup of guest speakers to club meetings.

We caught up with Braunstein in October at the first Success Club meeting of the year when the guest speaker was Tanya Brown, author, motivational speaker and sister of Nicole Brown Simpson whose ex-husband O.J. Simpson was tried for her 1994 murder.

The bleachers in the gym held a crowd of about 250 students to hear Tanya Brown’s story of overcoming struggles with an eating disorder, depression and her sister’s murder, to become the successful author and highly sought after motivational speaker she is today.

Brown is the author of two books, Finding Peace Amid the Chaos: My Escape from Depression and The Seven Characters of Abuse: Domestic Violence: Where It Starts & Where It Can End.

“I chose Tanya as the first speaker because being a high school student is hard, and she knows that and wrote a book about making it through,” Braunstein said. “Being a senior, we’re all doing college apps and I knew she’d inspire us all and help us realize that we can make it through.”

Brown talked about her time as a student at Dana Hills and beyond and how ignoring her issues with low self-esteem by “putting on a happy face” eventually caught up with her, manifesting into some of the darkest days of her life. She encouraged the students to not ignore their feelings and issues and to reach out for help.

Brown told the story of how she pulled herself back from prescription drug abuse, suicidal feelings and a stint in a hospital psych unit to finally earn her college degree and find success in her career. She not only shared her warts-and-all tale but also offered specific strategies she used in her climb.

Brown also talked about the issue of domestic abuse and how education is the key to breaking the cycle, both for the abused and the abusers. She also introduced the creation of the Nicole Brown Simpson Scholarship Fund in honor of her sister. The fund, part of her Hugs Not Hits campaign to fight domestic abuse, will be offered exclusively to Dana Hills students.

“Because, as high school students we go through so much, it was great to hear such an honest first-hand story. And she’s awesome,” McCullough said. “The Success Club is really helpful and Cassie is amazing for taking the time out of her busy classes to organize it. I think it’s working.”

Brown, a 1987 Dana Hills graduate, said she was delighted to kick off the club’s year.

“I really just wanted to reach out and share my story in hopes that I can make a difference in the community my sisters and I grew up in,” Brown said.

“When I was at Niguel Hills Middle School, my mom would take me to some of my sister’s Success Club meetings during lunch and I saw how engaged the students were with the speakers,” Braunstein said. “I knew that I wanted to try and have that same impact on my fellow students when I got to high school.”

But Braunstein was quick to point out that she doesn’t do it on her own, and has a great team of peers behind her.

She also credited her faculty advisor Ken Workman who teaches P.E. and College and Career Planning (CCP), for offering the support necessary to keep the club’s wheels in motion.

Also in his fourth year with the club, Workman said he believes the club has provided a valuable resource for students.

“I think the Success Club is amazing,” Workman said. “Bringing in people who have a passion for what they’re doing and have made it, with no guarantee of success, by working hard and following their talents and passions and hearing about their journeys first-hand is such a gift for kids. Cassie has done an amazing job as leader. It’s not an easy task to get guest speakers. You have to knock on a lot of doors and be persistent, and with that, she’s done an amazing job.”

Accompanying Lauren Paul was her husband, actor Aaron Paul, who, Braunstein said, caused quite a ruckus on campus.

“I think kids are more likely to go to meetings and engage when we bring in interesting speakers who have something in common with the student’s plan for their future,” Braunstein said. “If a speaker catches the attention of or inspires even one student in the room, then I would say the meeting was a success.”

According to Braunstein, the speakers enjoy the experience too.

“Steve Carroll told me he wants to return to host a sort of ‘Ducks insider’ type of program,” she said. “He even gave the Success Club a shout-out, live on the air during the Ducks game last Wednesday.”

Braunstein said that although she only has half of the school year left with the club, she still has a long list of speakers on her wish list.

“I’d like to bring in a Ducks player, Ryan Sheckler, a few more authors and Magic Johnson,” she said. “We’ve been trying to get Magic Johnson for six years. He said ‘yes’ two years ago but then after he bought the Dodgers he was really hard to pin down with his busy travel schedule. We’re not giving up on him though.”

Braunstein said she thinks the Success Club’s highest value shows when kids who are “borderline about to give up” get the chance to meet someone who, through telling their stories, help students realize “we have our whole lives ahead of us to do something like they did.”

On the inevitability of having to hand over the reins to someone new after graduation, Braunstein said it makes her sad to think about it.

“I’m not ready yet,” she said. “But I am happy to know that I will be leaving this as a legacy and I can’t wait to start something similar to the Success Club in college. I’ve experienced the impact it has on high school students and know that as a college student I will continue to value these opportunities. No matter where you are in life, it can be tough and it’s always nice to meet someone who inspires you.”