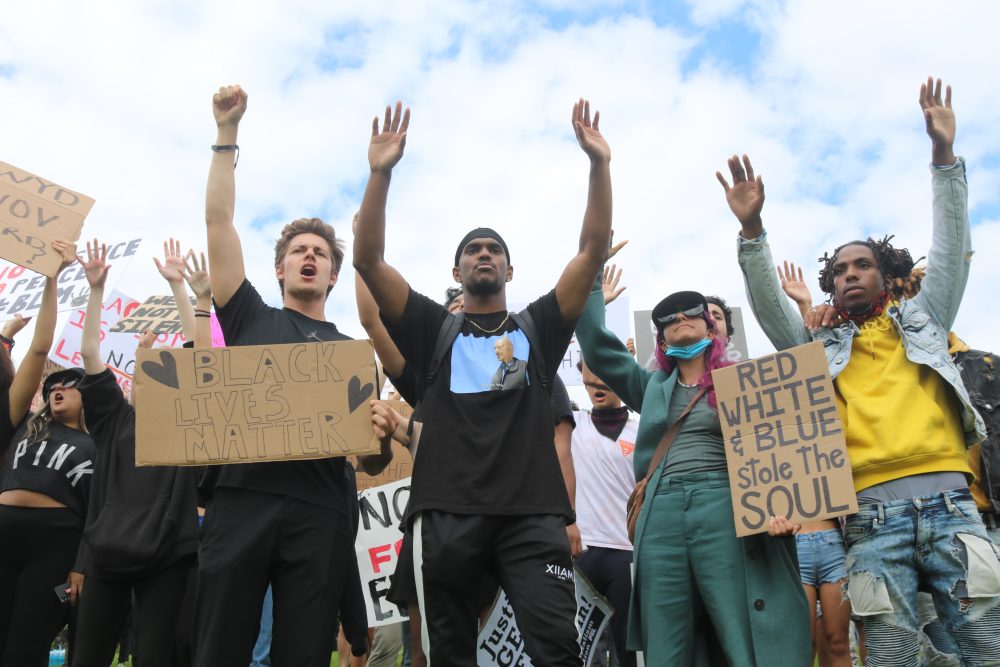 Second #BLM-Supporting Protest in Dana Point Draws About a Thousand

The second protest held in Dana Point in response to the death of George Floyd, a black man who was in police custody at the time of his killing, drew about a thousand demonstrators on Friday, June 5.

Organizers met at Dana Point Harbor at around 3 p.m. where participants began to march up Golden Lantern toward Pacific Coast Highway, and then north to Salt Creek Beach—a 2.3-mile trek, or 4.6 miles for those who walked back to their starting point at the harbor. A plethora of passing cars honked at demonstrators who held up signs that decried police brutality or paid tribute to the black lives lost at the hands of law enforcement.

Alexa Murray, 19, is originally from San Clemente and recently moved to Dana Point. She and Olivia Fuentes, 19, organized both the first San Clemente protest and the second Dana Point protest. “We are not part of any official organization,” Murray said. “We worked our butts off to make sure this event was as safe and peaceful as possible while allowing people to stand up for what they believe in.”

Murray said it’s hard for her to understand why someone would hate someone for their skin color but she wants that kind of thinking to be wiped out.

“Social justice is important to me because the second I hear about someone being racially discriminated it makes me feel disgusted,” Murray said. “People need to be educating themselves on what the black community is going through and put yourself in their shoes, understand their perspective. (Nonblack people) will never understand what that experience is like but we can do our best to listen.”

Minneapolis police officers stopped Floyd on May 25 after a store clerk had accused him of using a counterfeit $20 bill. What transpired during his arrest has since sent shock waves across the nation. Recorded video taken by onlookers shows one of the four responding officers—Derek Chauvin—pinning Floyd on the pavement by kneeling on the 46-year-old’s neck as he gasped and pleaded for air, struggling to breathe.

Chauvin, a white officer with more than 18 years of service with the Minneapolis Police Department, was fired after the incident, when he was initially charged with third-degree murder and second-degree manslaughter—charges many protesters had criticized, believing it to be too light. The first rally in Dana Point, held on Wednesday, June 3, was led by Aliso Viejo resident Khalil Watson. Dozens of demonstrators peacefully marched from Bear Brand Park in Laguna Niguel to the Camino del Avion and Golden Lantern intersection, which straddles the Dana Point and Laguna Niguel border. There, they occupied the four corners while waving signs and chanting “Black Lives Matter!”

The event came on the day that Minnesota Attorney General Keith Ellison announced that Chauvin’s charges were upgraded to second-degree murder. Chauvin is scheduled to appear in court on Monday, June 8. The three officers who also were involved in Floyd’s arrest and didn’t intervene had also been fired, but it wasn’t until June 3 that Ellison brought charges against Thomas Lane, J. Alexander Kueng and Tou Thao for aiding and abetting in Floyd’s death.

While plans for a third demonstration in Dana Point are unclear, protests in South Orange County continued on Monday, June 8 in Mission Viejo, Newport Beach, Santa Ana and Ladera Ranch.