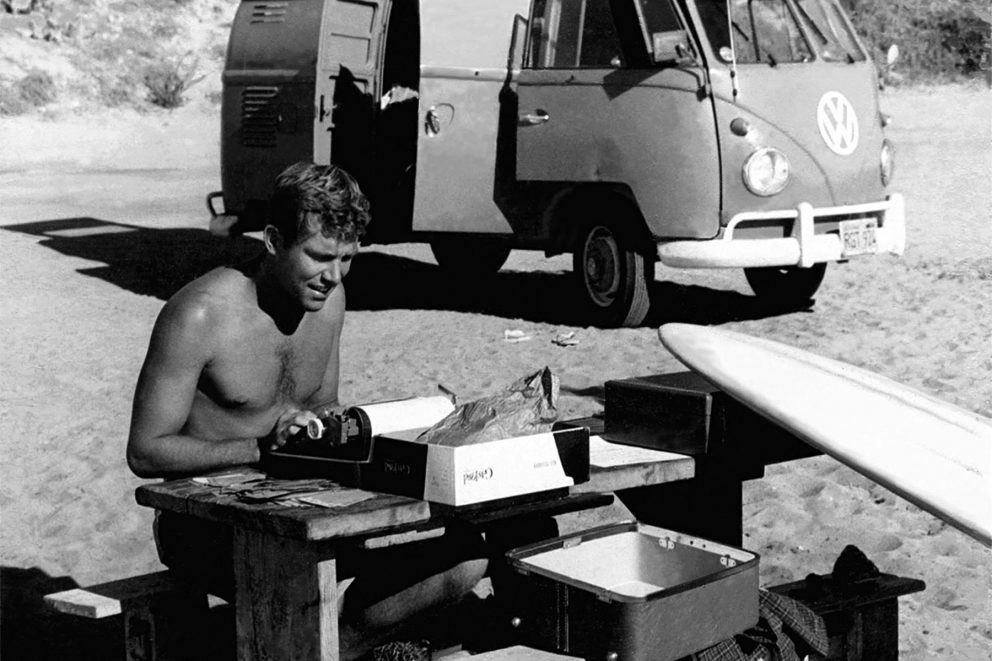 In Search of My Next Surf Vehicle

From Sprinter Vans to Electric Cars, There’s No Shortage of Options

There are a lot of all-time surf photos out there that have had a hand in inspiring a million different barefoot adventures. But for me, that photo isn’t an epic exotic lineup or a frozen moment of poetry in motion.

The “surf” photo that has inspired my life more than any other doesn’t even have the ocean in it.

It’s the simplicity that struck me when I first saw it however many moons ago. I can’t remember when it first showed up in my life. It’s one of those images that seems like you’ve always known it.

John Severson pecking away on a typewriter on a picnic table at San Onofre in 1959 struck such a profound chord with me.

Clad only in surf trunks, his board in the foreground, the doors of his VW bus in the background flung open, I just remember seeing it and knowing that’s what I wanted to do for a living—go to the beach and write.

And, as luck would have it, I’m sitting here at San Onofre with my laptop, looking out over the surf and writing, more than 70 years since that original photo of Severson was snapped.

Severson would go on to found Surfer magazine in a nearby office in Dana Point the following year, as well as make surf movies, including his iconic film Pacific Vibrations. He eventually sold Surfer and moved to Maui to pursue the life of an artist. Severson passed away in 2017.

But this week’s column isn’t all reverence for a man that’s had a profound impact in my life. Let’s talk about that San Onofre van life. Like surf mags, Severson was early to the game with his camper van at San O, but he certainly wasn’t the last.

Drive through the parking lot today, and you’ll find rigs that are so kitted out they’d survive the zombie apocalypse. Then there are others that are such beaters, it’s a wonder they were able to make it down the dirt road.

Some people have taken the do-it-yourself approach and engineered small cottages on the back of a truck. And for those with $100,000 to burn, a fully built-out Sprinter van with four-wheel drive, racks, sleeping quarters and kitchenette has all the comforts of home.

I find myself at a bit of a crossroads right now. For the past 15 years I’ve been driving a truck, which I bought while working at Surfer magazine. As it got up there in mileage, I also picked up a small electric Fiat for buzzing around town and picking the kid up from school.

Well, the lease is up on the Fiat, and they’re discontinuing the program, while the truck is a bit long in the tooth. That leaves me looking for a new vehicle this summer.

So far, I’ve convinced the wife that getting a van isn’t a horrible idea. From runs up to the mountains, to camping out in the desert, to writing more columns at San O, there’s no doubt we’ll use it.

But, holy options! To be honest, it’s a bit overwhelming. From Sprinters to restored VWs, it seems shopping for a van really depends on what kind of mood you’re in. I even found myself looking at classic early ’60s Econolines on the internet the other day.

But to be honest, after having an electric car as my daily driver for the past five years, I really can’t imagine getting another vehicle that guzzles gas.

Just plugging your car into the wall in the garage and never going to a gas station is ridiculously nice. And because of the electric motor, there’s pretty much no maintenance required (not even an oil change). I could throw some racks on a new Chevy Bolt and be golden.

So, do I go full van life and keep chasing Severson’s dreams, or is it time to dip into a new electric car and keep things green? Thankfully, I’ve got a few months to think about it all.

Shaping Your Own Surfboard

Grom of the Week: Jacob Brown