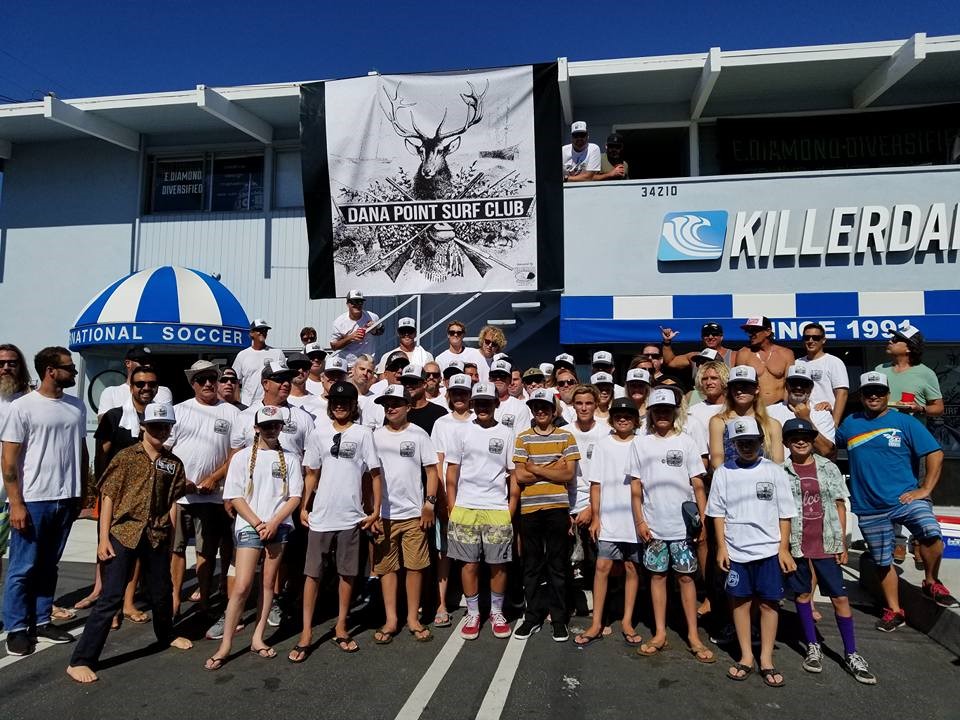 Upon walking in but before sitting down, Dana Point Surf Club Executive Committee Chairman Eric Diamond perused the perimeter of his office behind Killer Dana Surf Shop.

That office, formerly the office where John Severson designed and created the original SURFER Magazine, is covered in local heritage and soaked in surfing tradition Diamond is eager, and proud, to share.

This year, Diamond—whose father was a member of the famous Wind & Sea Surf Club and is a former traveling competitive surfer himself—will call upon his unique perspective granted by direct lineage of California surf club “cool” and Australia’s ultra-competitive surf club culture to make the Dana Point Surf Club a respectable, and competitive, presence in the newly formed Western Board Riders Club surf series.

Dana Point entered the new surf club platform last year when the originators of the West Coast Board Riders called Diamond to get a team together for Dana Point.

Diamond quickly organized a team, admitting that they weren’t together in their first competition, but said he remembers feeling overwhelmed with the rekindling of old friendships and overall experience.

After that initial trial, Diamond held a surf club interest meeting in Dana Point that was attended by more than 100 local surfers and fans.

“I really want to make this a club more than just a team,” Diamond said. “We want to give back, and more than just the occasional beach clean-up. I want our club members to be ambassadors not just for surfing, but for Dana Point.”

Despite being “in-season,” now, the Dana Point Surf Club is very much a work in progress. Diamond is seeking local sponsorship, and is working closely with the City of Dana Point to achieve its nonprofit status. He even joked about organizing a multi-city staff event, including Dana Point City Manager Mark Denny, who Diamond credited with being a

strong supporter of the program.

“We’re not rushing this. I want to do this right,” Diamond said, who recognized that after a career in the global surf industry, being a small business owner in Dana Point has given him a new sense of respect for the impact of local businesses.

“What’s nice is, Dana Point is still kind-of a Mayberry surf town,” Diamond laughed. “I would love to have Dana Point Autos behind the team, the team at Jacks up the street for example, supporting the Club. The guys here at Killer Dana Surf Shop have done an amazing job bringing us in. We’re a small town, and we all know each other. There is a sense of responsibility, accountability.”

Diamond insists that the Dana Point Surf Club is as much about comradery as competition, in the water as well as outside of it. He credits his understanding of a time before the territorialism, now rampant in California, to his father, who in addition to surfing with the Wind & Sea Surf Club worked for blank manufacturer Clark Foam, delivering blanks up and down the coast.

“He would have these connections all up and down the coast. Surf with these guys here, these guys there,” Diamond said. “I got to learn, and learn to appreciate, all the different flavors of surf culture.”

“I love that I see guys like Kevin Shulz from San Clemente come to surf Salt Creek, say hello and shake my hand on the beach when he sees me. He takes his waves, but shows respect,” Diamond said. “His doing that inspires others to do that when they visit his beach.”

In addition to learning about surf culture, Diamond is instilling a connection to local surfing through the Club.

“As cool as it is for me to see my buddies and old friends, it’s great to see these younger guys and girls meet, learn and compete against some of the best, and most important characters in surfing’s eclectic mix,’ Diamond said.

“Some of these kids just don’t know the history of things like SURFER Magazine,” Diamond said, again opening his arms to the walls soaked in decades of history. “We’re trying to create a sense of connection, a sense of ownership. A lot of these kids don’t really know how in addition to Killer Dana, there was a reef break set-up with four different waves out there. Maybe next time, as good as the Harbor is for business, the Harbor doesn’t get built. For things like that to happen, the next generation needs to know.”

Diamond said that with teams soaked in World Surf League (WSL) World Championship Tour-level talent like neighbor San Clemente, there will almost certainly be opportunities to learn for his Dana Point team.

“There are going to be times when one of our guys comes up against an absolute professional-level surfer, and I think in that lies an opportunity for growth,” Diamond explains.

“I think that plays a big part of Australia producing incredible competitive surfers,” Diamond reasons. “These young surfers are competing against, and learning by experience from the best of the best. It’s a rare opportunity and I hope it validates our guys and girls, not frustrates.”

Diamond is proud that the Dana Point Surf Club, in addition to competitive surfers like Pat O’Conell, includes surfers such as local shaper, artist and professional Tyler Warren.

Currently, the West Coast Board Riders consists of two divisions, North and South. The South division consists of Dana Point, Newport, Laguna Beach, San Clemente, Oceanside and Carlsbad. After three competitions in each division, and two specialty events, the top two teams will go head-to-head in a final competition at a yet-to-be-determined location. Currently, there are six-man divisions: 50 and older, 40-49, 30-39, 20-29, 15-19, and 14 and under.

One of Diamond’s direct contributions to the West Coast Board Riders format was the addition of a women’s division.

“It was one of the first things I noticed,” Diamond said, speaking of his initial competition in Huntington Beach. “I told them immediately, there has got to be a women’s division in here to compete. Dana Point has such a rich history and so many amazing female surfers. We’re very proud of that, and excited to see them out in the water.”

This Saturday, April 7, Diamond and the Dana Point Surf Club welcome the rest of the South division of the West Coast Board Riders teams, for their home competition at Salt Creek.

“We want to welcome everyone to our space,” Diamond said. “We want to let people know how special this place is, welcome them as they have welcomed us to their waves, and remind people what this place means to us. It would be great to win it all this year, but we’re going to have a great year either way.”