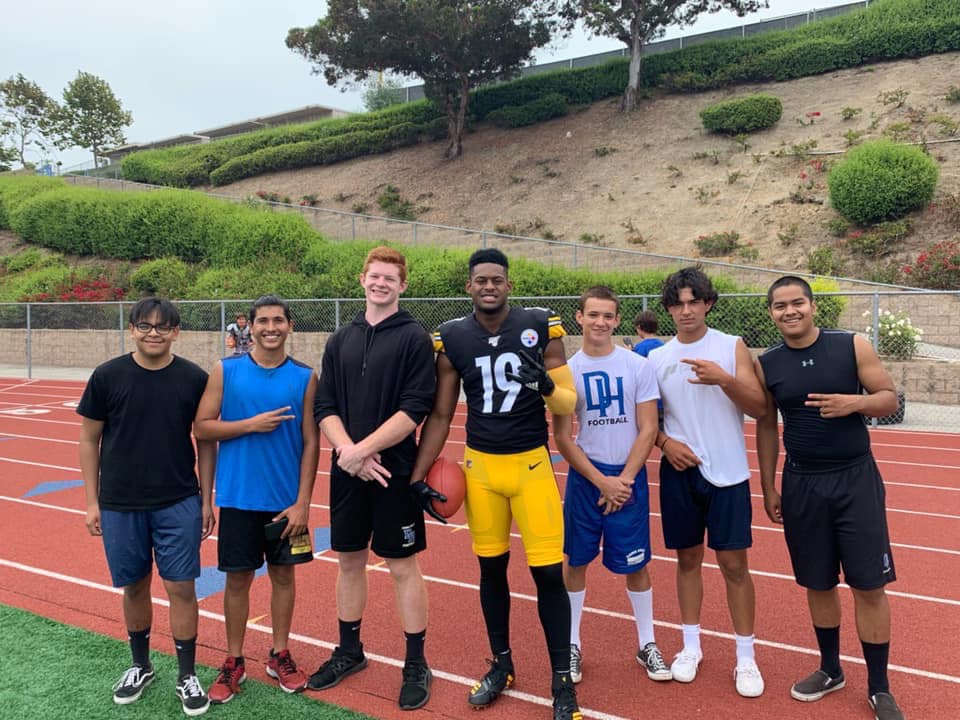 Pittsburgh Steelers wide receiver JuJu Smith-Schuster, a former USC star, made an appearance on the Dolphin field in full uniform with camera crew in tow. Smith-Schuster was going deep on the New York Giants and being filmed for a new commercial.

It wasn’t Smith-Schuster’s first visit to Dana Hills. After his college career at USC, Smith-Schuster trained with other NFL prospects including now-Houston Texans quarterback Deshaun Watson ahead of the 2017 NFL Draft.

NFL prospects and players have frequented the Dana Hills field with Jordan Palmer, former NFL quarterback and current coach and trainer, using the facility for his QB Summit.

Dana Point Youth Baseball’s 10U Tsunami gave all it could but came up just short at the PONY West Zone SoCal Central Region Mustang 10 tournament from July 12-14 in Irvine.

DPYB had advanced out of the losers’ bracket at the District tournament and earned a bye to the second day of competition at the Regional tournament.

The Tsunami exploded in their first two games with a 12-2 win over Fountain Valley and a 16-1 win over Olive, which beat DPYB in the District tournament. The wins put Dana Point into the championship bracket final, but the Tsunami couldn’t muster the same offense, as Placentia won the Central Region title, 8-4.

Despite the loss, DPYB still had the opportunity to advance to the Super Regional in the losers’ bracket final against Tustin. However, Tustin ran the table after losing its opening game to Olive and beat Dana Point, 7-4, to take the Super Regional bid.

The Mustang 10U Tsunami’s run ends one of the more successful postseasons in Dana Point Youth Baseball history. The Bronco 11U Tsunami won the District championship but lost in its Regional last week.

The efforts of both Tsunami teams also showcased the success of the selects program for DPYB, which started only a season ago, when the 11U team competed as a 10U team.