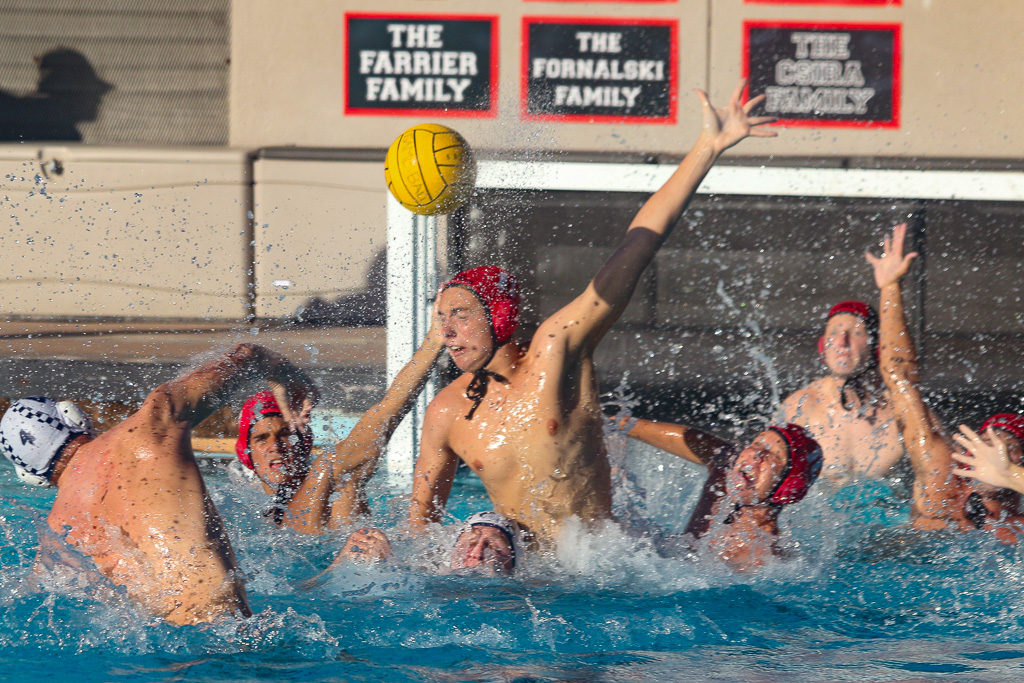 Blood in players’ mouths when they take an opposing arm and elbow across the face.

Family blood as both teams know each other very well, including opposing players sharing a grandmother.

And drawing first blood in the South Coast League title race as San Clemente did on Tuesday.

The Tritons surged ahead in the second quarter and held off the Dana Hills advances, including sweeping an attempt off the goal line as time expired, to take round one of the rivalry, 10-9, in front of a packed pool deck at San Clemente High School.

“Our boys did a good job as far as pulling off the win,” San Clemente coach Logan Powell said. “I think ‘we pulled off the win’ is a good way to put it. San Clemente boys water polo program hasn’t won back-to-back league championships since 1995-96. That’s what we’ve been talking about. These guys have an opportunity to put their stamp on the program and do something really special, and they took a big step in that direction today.”

“San Clemente made great plays,” Dana Hills coach Matt Rosa said. “I’ll give them a lot of credit. They hit shots from the perimeter. Their other guys made shots early and gave them a little bit of a lead, and they did enough to keep us off the scoreboard in the second half. It was a good game by them.”

The key to the second-half defensive effort by the Tritons was Trevor Benge in the cage. The San Clemente goalkeeper stopped Dana Hills’ Kaden Likins, who scored three goals all in the first half, from point-blank range twice in the fourth quarter as the Tritons clinged to their one-goal advantage.

“Trevor saved us,” Powell said. “He showed a lot of heart. We talked about having hustle and heart. He did that.”

Dana Hills’ Justin Edward more than his fair share of saves to keep the Dolphins within one, including a save with 15 seconds remaining that sparked a final dramatic play.

“Oh [expletive],” Powell laughed as he recalled his thoughts watching the final play. “One of our defenders fell a little asleep worrying about (Likins) and didn’t have the primary responsibility. I kind of thought that that was how the day was going to go.”

Dana Hills grabbed the lead to open the game and led by two, 4-2, on back-to-back goals by Likins.

Hosea scored his first goal on a five-meter penalty shot and scored his second goal to cut the deficit to one at the end of the first quarter.

Likins scored the lone Dolphins goal in the second quarter as the Tritons grabbed the lead, 7-5, into halftime.

Andrew Gansel put San Clemente up by three to open the third quarter, but Adler Zachary scored his second goal and Curren McCarthy scored two to bring Dana Hills within one entering the fourth quarter. Hosea scored his fifth goal on a spinning backhand in the third quarter.

Hosea completed the double hat trick with his second five-meter penalty goal in the fourth quarter.

Dana Hills didn’t receive any penalty shots in a physical contest, and Rosa lobbied the referees down the stretch as tensions began to rise.

“It was frustrating,” Rosa said. “I felt there were a couple referee calls I didn’t agree with. You hate to have a game of this magnitude (influenced by the referees).You want to walk away thinking like, ‘hey, San Clemente won. They did a great job. That was the difference.’ But I thought there were some referee calls that had a big impact on that game.”

Aidan Sullivan scored for Dana Hills to cut the deficit to one goal again, but the Dolphins couldn’t find their way around or through the San Clemente defense.

“I thought we definitely were forcing some shots,” Rosa said. “I thought we did not use our whole team. I said when we’re doing our best, we’re playing as a team and getting a lot of guys contributing. I thought we weren’t really playing as a team that well at the very end of the game. We were down by one, we just wanted to get a goal, and rather than doing the movement-based offense, we were just looking for a home run shot.”

Likins and Dana Hills were turned away time and time again by the arms of San Clemente defenders and the efforts of Benge.

Dana Hills will get another shot at San Clemente at Dana Hills on Oct. 16 in game that will determine the ultimate fate of the South Coast League title and impact playoff division placing.

“That’s kind of the good news for us is that we do a home and away,” Rosa said. “We get them at Dana Hills. Hopefully we can tie our series up and see where the league title goes.”

San Clemente’s next league match is at El Toro on Tuesday, Sept. 25, and on the same day, Dana Hills hosts Tesoro.