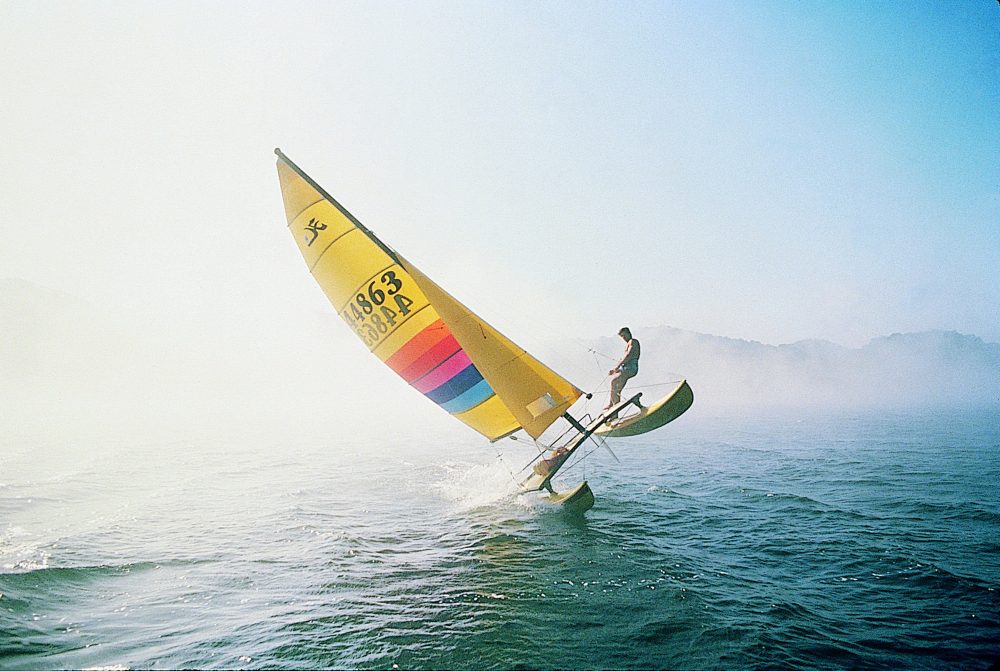 Any other day it would be illegal, but this Saturday, Oct. 27, 50 Hobie Cat catamarans will launch from Doheny State Beach, 50 years after its inception.

In honor of the catamarans that helped build the Hobie Cat Company, the celebration will feature the “Hobie Cat Funtastico,” a 10-mile distance fun cat race that will launch from the beach and sail past historic Hobie landmarks along the way.

Hobart “Hobie” Alter’s original concept of the Hobie Cat was created to emulate Hawaiian canoes. He collaborated with his fellow surfers to develop a simple, easy design. The Hobie Cat 14 was then created in 1968.

The design took sailing, a sport that had been too difficult or expensive in the past, and made it more welcoming for people to participate in. As the popularity for the Hobie 14 expanded beyond Dana Point, the need for production increased, ultimately leading to the creation of the Hobie Cat Company. Now the Hobie Cat is the most popular sailboat ever produced, said Hobie’s Marketing Executive, Sean Douglas. He added that’s a feat worth celebrating, but it took coordination and cooperation with local organizations to pull the event together.

“Doheny State Beach has been so helpful in getting this celebration together. It isn’t legal to launch a boat from the beach, but [State Parks officials] assisted in getting us the appropriate permits to do so. They’ve been immensely supportive and understanding of the cultural significance behind this anniversary.”

Hobie Cat operators are traveling from all over the world to participate, some from Mexico, Europe and Canada.

“Anytime you got this many boats launching from the beach, it’s going to be a spectacle,” Douglas said. “For anyone who grew up going to the lake or going on beach vacations, this event will be a major source of nostalgia. The Hobie Cat is an icon.”

The celebration is open to the public and will feature a great display of Hobie Cat culture and a day full of family-friendly activities. Saturday’s festivities will kick off with a free yoga class on the Doheny State Beach lawn at 9 a.m., with the regatta scheduled for noon. Visit www.Hobie.com for more information.

The 50th Anniversary Celebration comes with a planned unveiling of the life-sized Hobie Alter statue right around the corner. The Hobie statue, a bronze figure designed by local artist Lance Jost, will be the centerpiece of a series of statues of legendary watermen local to Dana Point, sculpted by local artist Bill Limebrook.

To help raise funds and offset costs for that project, the Hobie Memorial Foundation is working with the local surfboard building community to make 50 limited-edition Hobie Phil Edwards Model boards. Made from balsa, the wood has been sourced from Papua New Guinea and is among the clearest, most fine-grained in the world, with a $5,000 price tag.

The City of Dana Point will announce the presentation date initially planned for the fall, which will be held at the new linear park adjacent to the South Cove development at 34202 Del Obispo Street. If you’d like to make a donation to the Hobie Memorial, you can mail a check made out to the “Hobie Memorial Foundation” to PO Box 195, Dana Point, CA 92656. All donations are tax deductible.