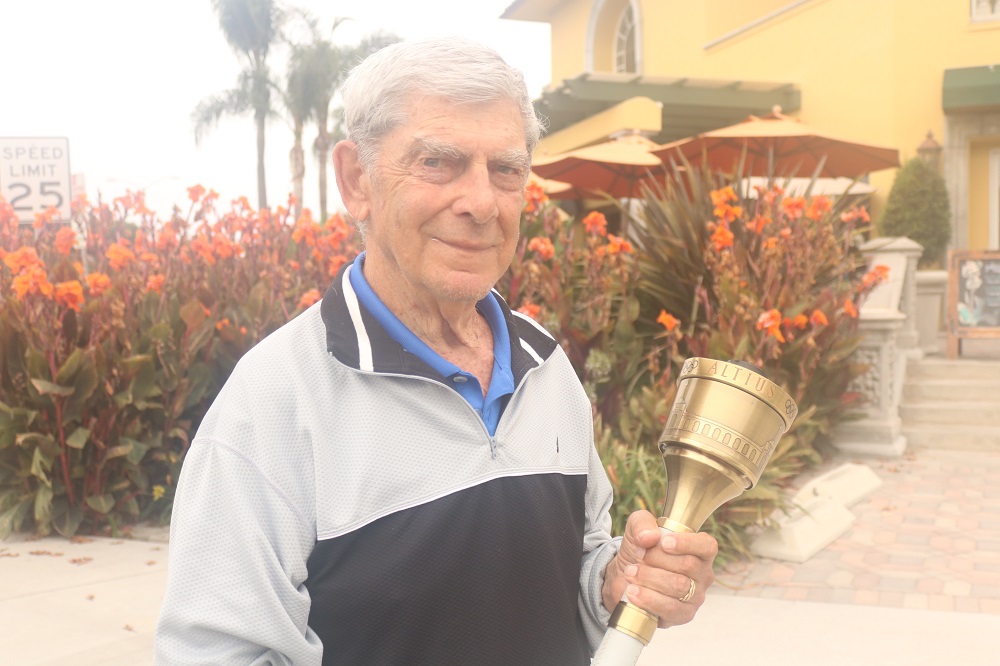 Dana Point is still five years away from becoming an incorporated city, but the Orange County harbor town is part of the path to the greatest of international events.

Thursday marked the 34th anniversary of the Olympic torch relay, as part of its 9,000-mile journey through the United States, passing through Dana Point on the way to the 1984 Olympics in Los Angeles.

The occasion was recognized only by the relay’s organizer, Dick Sargent, sitting at a coffee shop on Pacific Coast Highway with his personal 1984 torch in hand.

Passersby stop by with looks of excitement at the sight of the 1984 Olympic torch. Photo: Zach Cavanagh

Sargent, 84, organized the original relay, which zig-zagged across the United States from New York to Atlanta to Chicago to Houston to Seattle to San Diego to the Los Angeles Memorial Coliseum. He also received the Olympic flame in Olympia, Greece and acted as the flame’s steward for the journey.

With the 34th anniversary celebration limited to open mouths, excited faces and pictures with the torch from passersby, Sargent is on a mission for the coral or jade anniversary of 35 years to organize a community run to recreate and celebrate Dana Point’s moment in history.

“There are two objectives,” Sargent said. “Raise a little bit of money (for charity), and the second is to expose Dana Point to the rest of the community.”

Sargent is a member of the Niguel Shores men’s club, where he gave a talk and met Dana Point Mayor Pro Tem Joe Muller. This encouraged Sargent to speak at the latest City Council meeting at which Sergeant tried to drum up support for the potential event.

“The biggest step right now is trying to get the city to understand that there’s some significance,” Sargent said. “I would say, if you just do it next year for the 35th anniversary, you’re crazy. It should be an event in Dana Point every year on the 26th of July. Then if you’re going to extend that, being the initiator of the concept, we go to everybody that’s on this route; we go to Albuquerque, and let’s see what they think.”

There certainly is a framework, as Sargent rattled off several ideas of the event’s structure, what would be needed, what other events could be linked up to the celebration, how local businesses could become involved and just about every bit of how to run the entire thing.

Sargent has the know-how and experience from his time organizing the 1984 torch relay.

He grew up in Long Beach, and after time in the Army to earn his G.I. bill, he went to college at Long Beach City College and onto San Jose State University. While in a fraternity at San Jose State, Sargent met Peter Ueberroth. Ueberroth would go on to 20 years in the travel industry before becoming the organizer for the 1984 Olympics and later the commissioner of Major League Baseball.

After moving to Hawaii and four years working on sailboats in Tahiti, Sargent went into business with Ueberroth, who asked Sargent to join him in organizing the Olympics.

“Pete said, ‘I don’t know what I’m doing, but you don’t either, so let’s learn together,’” Sargent said.

Starting with just $173, Ueberroth, Sargent and the rest of the organizing committee went on to earn a surplus of a quarter of a billion dollars that was donated to the Special Olympics, LA84 Foundation, International Olympic Committee and United States Olympic Committee.

“We did reasonably well,” Sargent said. “No taxpayers’ money involved.”

Sargent worked on several projects for the committee, chief among them being the torch relay. His original idea was to fly the torch into San Francisco and have a six-day relay down California. However, in the meeting, it was a unanimous vote to run it across the United States, and it was then up to Sargent to get it to work.

“’Sargent, since you seem to know more about it than any of us, you’re running it,’” he recalled being told.

After organizing sponsorships from GMC and AT&T as well as finalizing the route, negotiating with cities and gathering an army of volunteers from coast to coast, the relay ran from May 8 in New York to July 28, 1984 at the Coliseum with 3,636 torchbearers, including a kilometer stretch in Colorado by Sargent.

For the 1984 relay, the torch ran north through Orange County along PCH through Dana Point on its way to Long Beach.

Sargent’s concept would be the 1984 and 2002 routes. His design would begin at the bridge over PCH on the south end of town with the terminus around Salt Creek Beach at the north end.

The spark for the event would be the anniversary of the torch relay, but the enduring flame for Sargent’s idea would be a celebration and promotion of Dana Point.

“Dana Point is looking to be somebody,” Sargent said. “There’s sports history in Dana Point.”