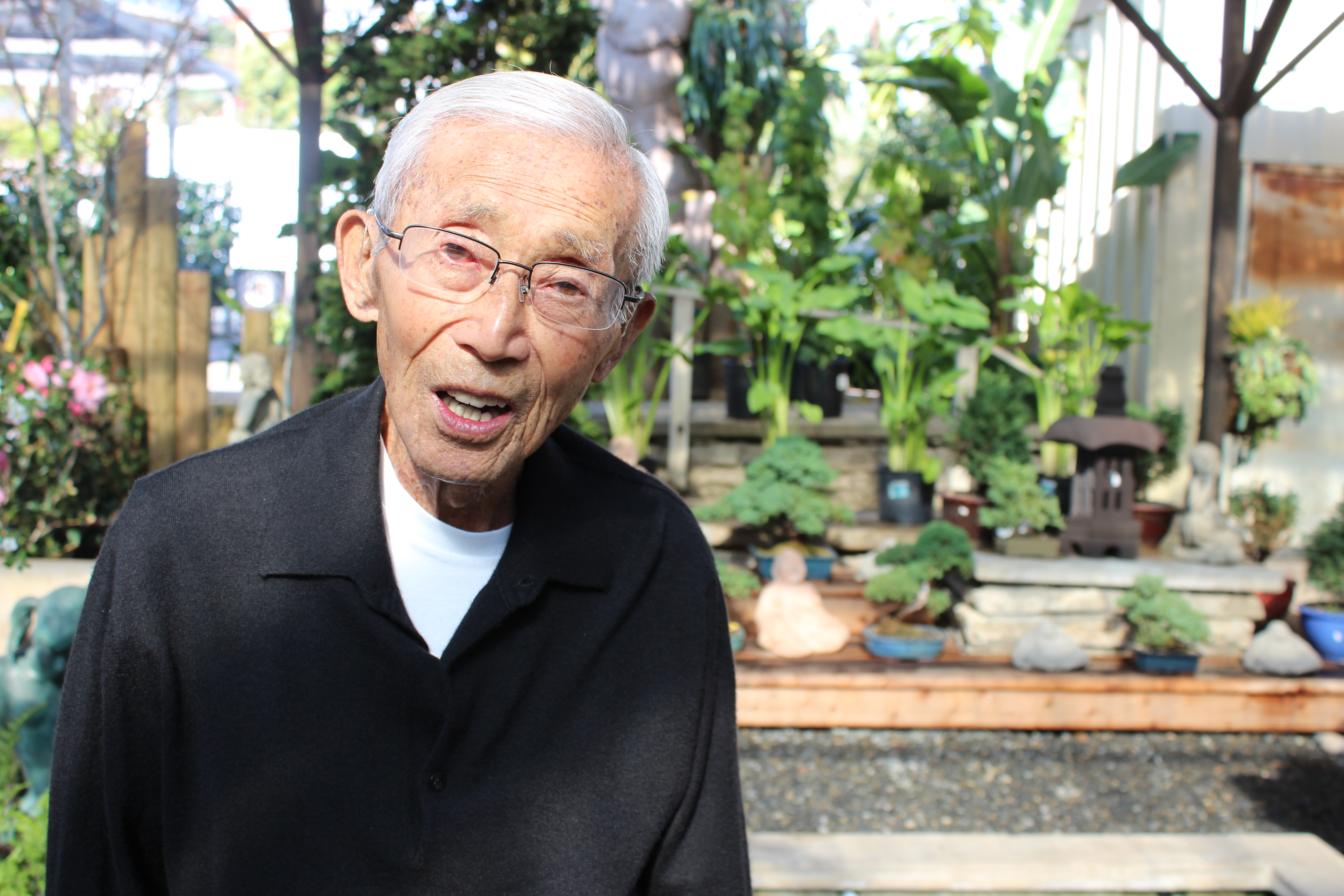 “A society grows great when old men plant trees whose shade they know they shall never sit in.”—Anonymous

As Harry Otsubo walks into his Dana Point Nursery, it is apparent, he’s made it home.

Otsubo wears his 100 years well. Having just celebrated his centennial Monday, January 6, surrounded by friends and family, Otsubo is still enveloped in a triumphant glow.

His longtime employees greet him on arrival, wearing proud smiles as they wish him “Happy Birthday” and “Welcome Home,” because the second he walks through the nursery doors, it’s clear, that is where he is.

Otsubo came to Dana Point in 1957 after more than a decade in Los Angeles. Long before the track homes, major roadways, resorts, Harbor and incorporation, Otsubo founded his city.

“He has always tried hard to help the community, so that there is a better future for everyone,” said Otsubo’s daughter Kathy Jones.

Her father is like the anonymous proverb Jones said. Like the great men and women who have gone before him, “He was progressive in trying to help the future generations, even though it is something he may never have seen,” she said.

Sitting amidst bonsai trees he’s nurtured since seedlings, Otsubo is in his element.

He points to some sitting on a nursery table, “Those are at least 25 years old,” he says. The small, ornate bonsai trees sit delicately manicured in a quiet Japanese garden with a koi pond and dozens of Buddhist statues. The trees are Otsubo’s passion. In his old age, Otsubo’s voice has quieted, but mention his bonsai trees and his voice perks up.

Otsubo was born on the Hawaiian island of Maui in 1914. The second-oldest of nine siblings, Otsubo and his family relocated to Southern California in 1940, just two years before the war in the Pacific.

He and his family were fortunate to have escaped the persecution of Japanese immigrants in the early 40s, when more than 100,000 were placed in internment camps throughout the west. During that time, the Otsubo family traveled to Utah where they farmed, Jones said, before returning to Los Angeles permanently at the end of the war.

He was self-employed from the start, Jones recalls, with his hand in grocery stores and movie theaters before moving to Dana Point. Once here, Otsubo diversified his portfolio.

Taking the farming knowledge he gained, Otsubo and his wife of 70 years, Tei, started a local nursery. He later acquired the Dana Point Nursery located on Pacific Coast Highway. The longstanding site, which Otsubo has owned since the early 1960s, still carries the iconic sign reading “Since 1947,” standing as a testament to Otsubo’s devotion to his community, family and his employees.

“There is no one else I want to work for,” said longtime employee Katie Roberts. “Without a doubt, I wouldn’t be here if it weren’t for Harry, Tei and Kathy, of course. We are more of a family than anything … There are not a lot of places like this anymore.”

Roberts was raised in Dana Point but relocated to northern San Diego County nearly a decade ago. Since then she has made the commute to Harry’s nursery because of that family. Even her brother and cousin have joined the nursery’s ranks, making it truly a family owned and operated business.

It was a family process from day one. Harry took to the nursery’s fields while Tei handled the shop’s day-to-day operations. And as her parents aged, Jones became more involved, before stepping in full-time nearly 30 years ago. Harry was never far from the action though, working almost daily in the fields and nursery storefront well into his 90s.

“He would go down to the field all day and then come to the nursery,” Roberts recalls. “He and I would close the store together. He always had the most amazing stories about life, gardening, bonsai trees and the city of Dana Point before it was developed and how different things are now than they were then.”

Otsubo landed in Dana Point when it was still open fields.

As developers built up the seaside community and the population grew, he made it a personal goal to preserve the area’s natural resources.

He worked with the family of one of Dana Point’s early investors and publisher of the Los Angeles Times, Harry Chandler, in the early days, recalls longtime colleague Susan Hinman. She and Otsubo served together on the county’s Dana Point Specific Plan Review Board back in the 80s, laying out the city’s zoning and planning codes before incorporation in 1989.

“Often times, he would be very, very quiet,” Hinman said of their time on the board. “He would listen to all the testimony and all the statements. Then, he would come up with a few sentences that were the sage. His responses were so true. He has always had the community’s best interests in mind.”

Otsubo also served on the Capistrano Bay Parks and Recreation District Board of Directors, “When I was on the board, we built 11 parks,” Otsubo said.

It is a time in Dana Point’s history that Kevin Evans, the city’s director of community services and parks, remembers well. Otsubo was on the board when Evans was hired, a few years before the district merged with the newly established city of Dana Point, in 1993.

“He was truly the visionary on the board of directors,” Evans said of the man who helped establish the city’s maintenance practices still used today. “He raised the bar as far as our standards go, like the frequency of mowing, trimming trees and the plant pallet that we have used in many of our parks.”

In 1982, Otsubo was named the Dana Point Chamber of Commerce’s first Citizen of the Year. Harry’s horticultural hand also landed his name on a city park, the Harry Otsubo Community Gardens.

“People love nature, whether it is animals or vegetables,” Otsubo said in a November 13, 1990 article, “Gardeners’ Small Plots Worth Lots,” in the Los Angeles Times, about the Dana Point community gardens bearing his name.

“There’s something fascinating about things growing. I think that’s what keeps a farmer going. He actually sees something that’s the result of his work, and can watch it grow,” Otsubo said in the article.

Otsubo knows this well. Even at 100, he maintains the near 60-year-old bonsai trees in his backyard.

Since they sprouted from Japanese seeds, Otsubo has cared from them, meticulously pruning and shaping them, always making them better. His work hasn’t gone unnoticed. When developers in Las Vegas were readying the mixed-use CityCenter development, 15 or more of Otsubo’s bonsai trees were purchased.

“It is an honor,” Otsubo said of his bonsai trees being selected. “But it took a lot of time,” he quipped. “Those trees were 40 years old.” But now, Otsubo said he hopes people visiting Las Vegas ask about the trees, learn and enjoy them for years to come. Just one of his many trees planted for generations to come.