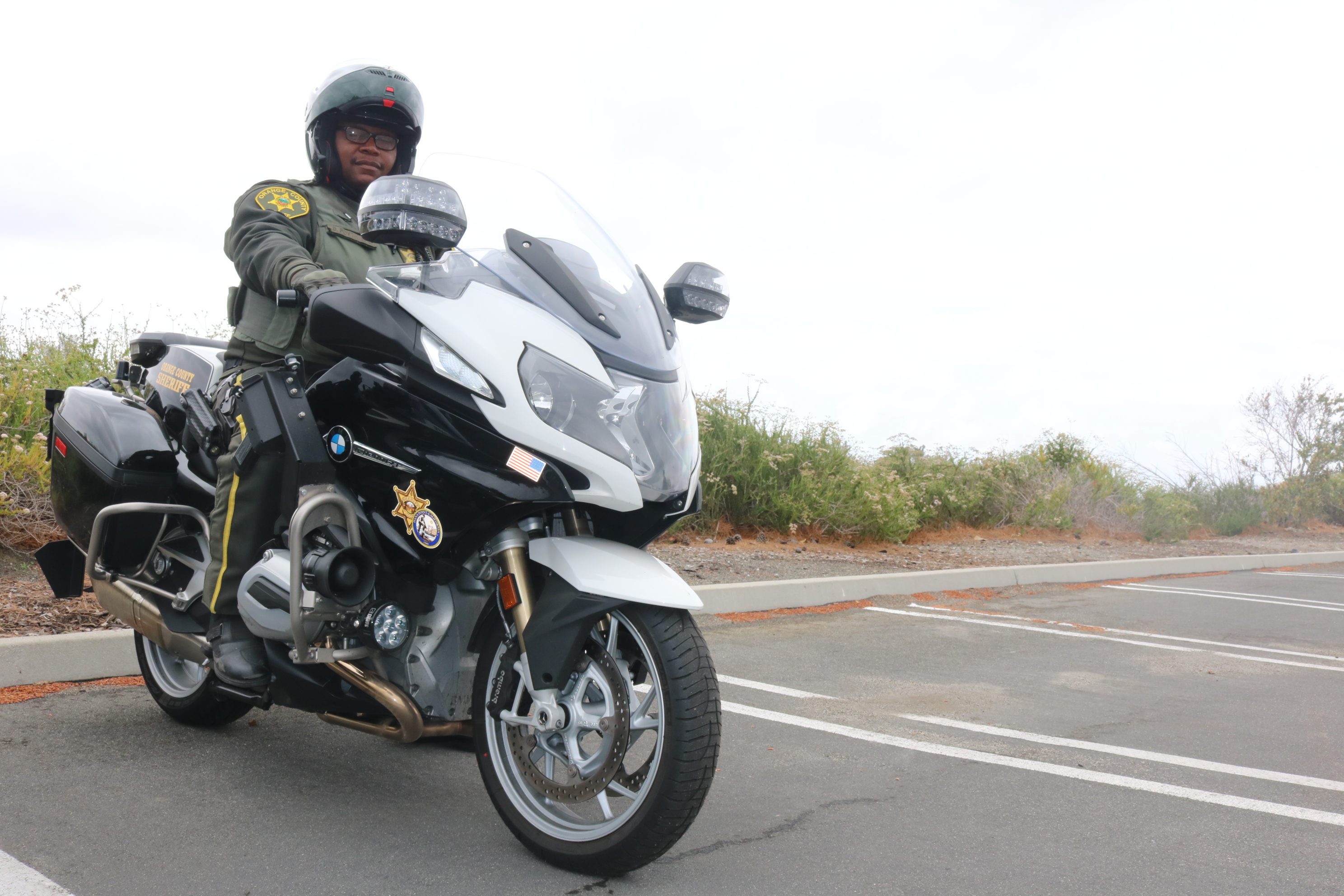 Road King: Motorcycle Deputy Cash Poythress is here to make sure that Dana Point doesn’t speed up as it heats up

One of those deputies was Cash Poythress, who earlier this spring became Dana Point Police Service’s new motorcycle patrol deputy.

Deputy Poythress is originally from Georgia and came to work for OCSD after serving at Camp Pendleton during a tenure of service in the United States Marine Corps. While working as an OCSD Deputy in Mission Viejo, Poythress said he was asked if he would be interested in becoming a motorcycle patrol officer.

“I had never ridden a motorcycle before,” Poythress admitted. “In my first day of training, they asked me to get on the bike and proceed with the easiest cone formation.”

“I asked them how to turn the bike on,” he laughed.

That was five years ago.

Now, Poythress is recognized as an elite-caliber motorcycle deputy and an instructor for new OCSD motorcycle deputies. Trainee’s must go through three weeks of off-road parking lot formation training before going to two weeks of training in San Bernardino County for additional on-bike training. Only then do new deputies return to Orange County to train on-road with a current moto deputy before being placed in

a city of their own.

“I just fell in love with it,” Poythress said, reminiscing. “And I still do. One way or another, to this day, I practice every day.”

While on duty patrolling Dana Point, Poythress said the majority of his job is focused on citing traffic violations and encouraging motorist safety.

Poythress explained that motorcycle deputies are effective for traffic violation enforcement due to their ability to maneuver in tighter spaces as well as being more easily hidden from view.

“You will see me in highly trafficked areas, as a deterrent, and also, citizens will let us know where problem spots are and that information is revealed to me,” Deputy Poythress explained, noting that most of his traffic violation citations are to non-residents.

Although the majority of his duties revolve around traffic violation enforcement, Poythress’ hog allows him to operate as a command center on two wheels when necessary. Given his choice of motorcycles, Poythress chose to ride a R1200 RTP motorcycle.

This authority’s specific model is based on the standard R1200RT, but can be recognized by the addition of stainless steel protection bars situated about the front fairing, also often used for mounting of additional equipment such as sirens.

Optional lighting may be installed including bright lights for illuminating a scene, and a light mounted on a telescoping post at the right rear, which can be operated while lowered for normal use, or raised to provide omnidirectional warnings while stopped (such as at an accident scene).

Deputy Poythress said that he was gracious to the city of Dana Point for outfitting his new BMW with the additional lighting options for his safety.

“Cash is an exemplary deputy and we are all proud to have him here in Dana Point,” said Chief of Dana Point Police Services Lt. Margie Sheehan, who has worked with Poythress extensively throughout their careers across the county.

Lt. Sheehan said that although it’s still too early in the year for conclusive results, she has seen a noticeable rise in citations and a decrease in major accidents in a comparable time period since Deputy Poythress’ arrival.

“I still love it. I commute to work every morning over Ortega (Highway), and I get to ride a motorcycle all day,” Cash said. “If you’re coming to Dana Point, slow it down.”