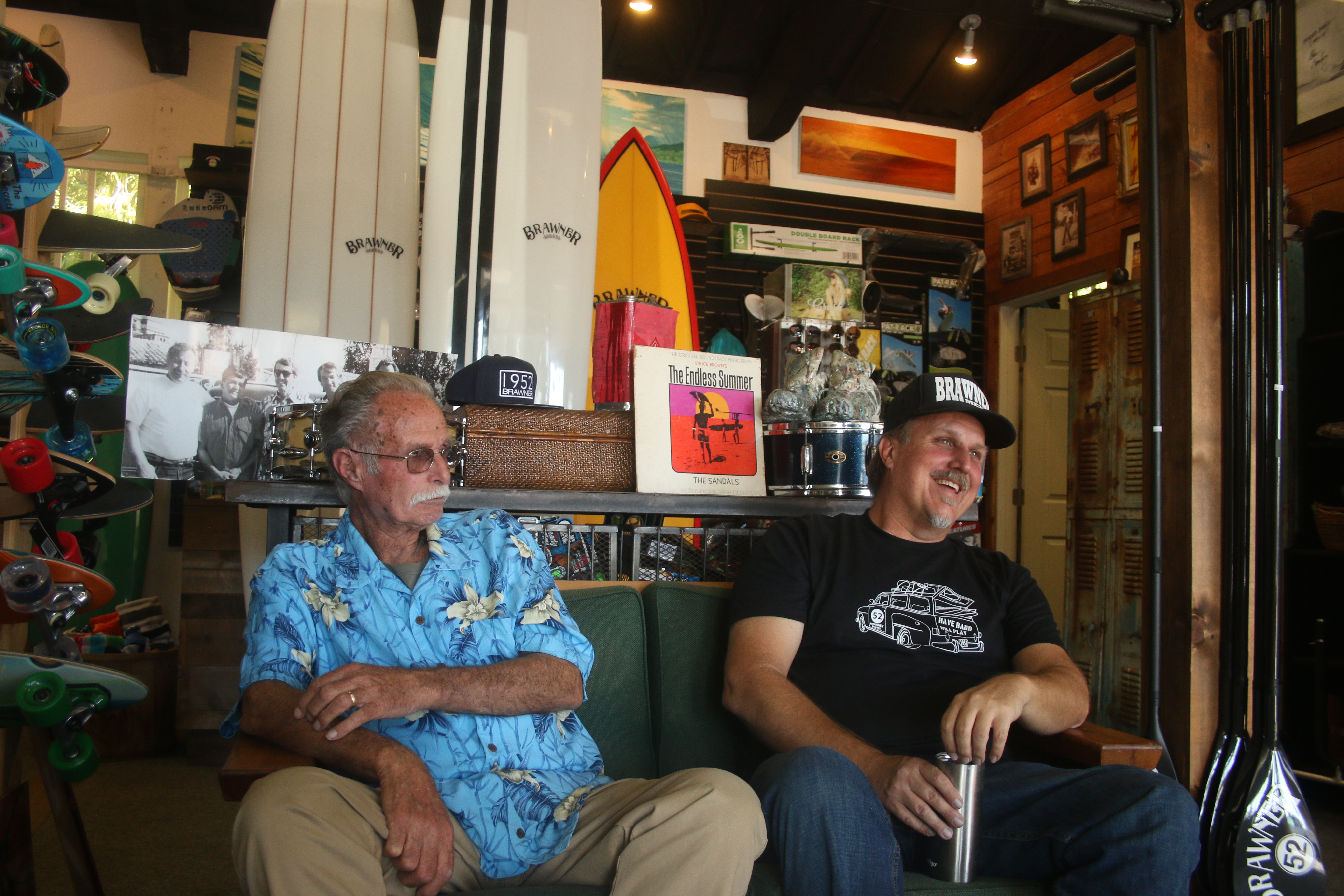 Rhythm and Resin The waves, and the beat, roll on for Danny and Damian Brawner of Brawner Surfboards

Commonly placed at the back of the stage, drummers are the too-often-forgotten, rhythmic backbones of the band.

Similarly, “glassers,” those deemed responsible for sealing surfboards’ porous interiors, most commonly nowadays with fiberglass over foam cores, are essential and universally understood as an underappreciated part of the surfboard-manufacturing business.

Since 1952, Dana Point’s Danny Brawner has been crafting and fine-tuning Southern California culture through his craftsmanship and his music in ways the masses often don’t take time to appreciate.

Locals may have to read the back of an album carefully, or ask a local shaper who did the all-important, life-sustaining glasswork on that new surfboard. It may not even be recorded in some cases, but a little research will quickly reveal the Brawner name is deeply woven into the fabric of South Orange County culture.

Now almost 80 years old, Danny Brawner entered the surf world when he crafted his first board in 1952.

Danny worked with legendary shapers such as Micky Munoz, Gerry Lopez and Corky Caroll, and glassed, pin-lined and resin-tinted the majority of Hobie surfboard shaper Terry Martin’s estimated 80,000 surfboards, rumored to be the most shaped by any single person.

One board in particular, which some at Hobie claim may have been the most important board the company ever made, was a 3-foot board turned around overnight for President Richard Nixon. Nixon’s daughter, Tricia, had ordered a board from Hobie, at the height of their notoriety in the budding Southern California surf culture, for her father for Father’s Day shortly after they arrived in the “Western White House” above Cottons Point in San Clemente. Unfortunately, the board, presidential seal and all, fell over inside the factory and was damaged before being given to the president.

“I just knew we couldn’t give this to the President of the United States,” Danny laughed.

Neither Damian nor Danny Brawner were able to confirm if President Nixon ever stepped foot on the full-sized model.

Somehow, during that time, Danny was doing double-time as the drummer for The Sandals, the band who created the soundtrack and theme song for Bruce Brown’s epic The Endless Summer. A little-known fact to the now-more-than 23 million surfers worldwide is the iconic theme song to what is widely-regarded as the most important surf film of all time was created in a garage on Trafalgar Street above the rolling waves of T-Street in San Clemente.

Danny, who during that time married his wife Sharon, sprouted four children; a son, Damian Jr.; and three daughters, Jan, Deanne and Danielle.

Danny Brawner plays on the original drum set he used to perform music for ‘The Endless Summer,’ a legendary documentary that helped spread surf culture across the world. Photo: Eric Heinz

Danny, left, and his son, Damian, talk about surfing, glassing and some epic stories of the past in their Brawner surf shop in San Clemente. Photo: Eric Heinz

Danny Brawner speaks about stories of the past regarding surf culture in the area at his family surf shop in San Clemente. Photo: Eric Heinz

Damian Brawner speaks about glassing surf boards and his time as a music and event promoter at his family’s surf shop in San Clemente. Photo: Eric Heinz

Danny, left, and his son, Damian, talk about surfing, glassing and some epic stories of the past in their Brawner surf shop in San Clemente. Photo: Eric Heinz

Humble and soft-spoken, Danny now works from time to time with his son, Damian, in their new retail shop off of Camino Capistrano and in their budding glassing shop as needed.

“It’s so nice to have him around because he can teach us all those things; he can pass along all the things that aren’t put on paper,” Damian said of his father’s airbrush and resin-tint skills.

In addition to his passion for art in the form of surfboard manufacturing, Damian also adopted his father’s love of music. Damian picked up the sticks, under his father’s tutelage, as early as sixth grade.

Also lengthening and strengthening local connection, Danny’s daughter, Danielle, married Izzy Paskowitz, a world-class surfer in his own right, of the Paskowitz tribe synonymous with San Onofre. Together, they founded Surfers Healing, a nonprofit organization that has helped thousands of people with autism across the world through surfing.

Damian evolved into quite the drummer in his own right, moving to Los Angeles after playing with a number of blossoming acts, to pursue a career in promotion and event management. There, the more outspoken Damian worked at world-class venues like Long Beach Vault 350 and the Billboard Live Key Club (formerly Gazzari‘s), by booking acts in eclectic variety, such as James Brown, Jane’s Addiction, Prince, Van Halen, Eddie Money and Tony Bennett.

“I’m a promoter at heart,” Damian said, revealing an ironic and rare diversion from his father’s generally reserved demeanor.

After almost 10 years in Hollywood, Damian and his wife returned to Dana Point to raise their family. They now have two children of their own; a son Haze and daughter Sunnie.

The apple hasn’t fallen far from the tree, and Damian said Haze has developed an affinity for playing the drums, making him the fourth generation of Brawner to sit behind the skins.

Today, Damian said he is mostly interested in passing the torch along to his kids and what his father’s era taught him.

“I’ve learned that I’m not really concerned with first place or second place, to be honest. We’re concerned with the barbecue after,” Damian laughed.

Damian was quick to show respect for his other “second generation,” South Orange County shapers and manufacturing brethren such as Timmy Patterson, Josh Martin and Cole Simler, who also grew up in Danny Brawner’s colleagues’ spaces in the Hobie factory as well as a number of others.

“Our glassing and resin work will remain at the heart of our business,” said Damian, who wanted to show respect for his colleagues and friends that have maintained a lifetime of local shaping and board production.

As attentions drifted, Damian noticed gazes at a peach-colored, single-fin Lightning Bolt surfboard hanging over his head shaped by legendary Reno Abellera and glassed by Brawner’s.

“It’s one of only five made,” Damian explained, shooting a glance over his shoulder to his father. “…and that one’s for my son.”

To view a current board line-up, order a custom surfboard or to learn more about Brawner surfboards, visit www.brawnerboards.com.