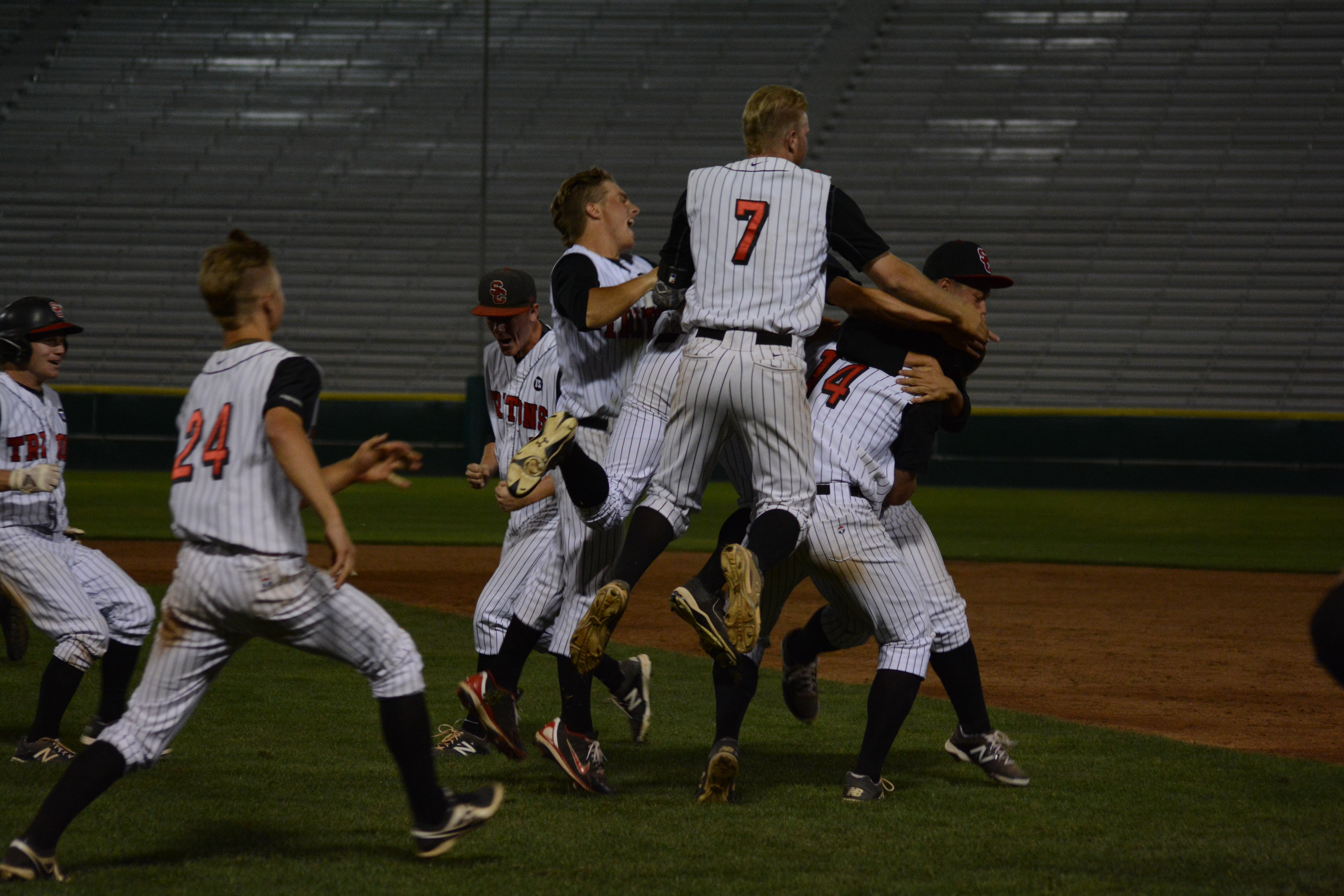 As he strode to the batter’s box in the bottom of the ninth inning with the bases loaded and a chance to defeat his school’s longtime rival Dana Hills in the championship game of the Loara Tournament Saturday night, San Clemente senior Will Tribucher had a short but simple message for his head coach, Dave Gellatly.

“I’m going to win this right here,” Gellatly remembers Tribucher saying, right before the Michigan-bound first baseman shot the first pitch he saw through the right side of the Dolphins infield to bring home the winning run and secure a 5-4 victory and the tournament championship.

“I knew I was going to win it right there. I was swinging on that first pitch no matter what,” Tribucher said.

In the bottom of the ninth, San Clemente’s No. 8 hitter Tanner Lawson laced a leadoff double off the Dolphins’ Justin Sterner, who was pitching his fourth inning of relief. With one out, Dana Hills (8-1) decided to intentionally walk both Tritons leadoff man Lucas Herbert and Connor Sealey to load the bases for Tribucher, who was 2-3 with a double and a run scored before his final at-bat.

The Tritons (5-0) were able to overcome 3-0 and 4-3 deficits in the fourth and sixth innings, respectively.

The Dolphins had their chances as well. After taking a 4-3 lead in the top of the sixth when Jay Schuyler scored on a fielding error, Dana Hills loaded the bases and threatened for a big inning. But Tritons junior starter Andre Pallante, making only his second career varsity start, got out of the jam with a strikeout and induced a ground out to limit the damage to one run.

Dana Hills had the bases loaded again in the top of the seventh but San Clemente reliever Dylan Riddle got a crucial pop-up with three on and two out to end yet another threat.

“We didn’t get that clutch hit. We had guys in scoring position a lot tonight,” Dana Hills head coach Tom Faris said.

Pallante allowed four runs, two unearned, on five hits and no walks. The righty struck out eight on the night and had a stretch where he retired 10 consecutive Dolphins batters.

Tribucher was named the tournament’s MVP.

Dana Hills entered the game ranked No. 1 in CIF-SS Division 1 and the Tritons entered as the top team in Division 2. Add in the fact that the two teams have been squaring off against each other for decades, and Saturday night’s game served as a good primer for postseason competition this early in the season.

“Between these two teams I don’t think either program has ever had as much talent as we (both) have this year,” Gellatly said. “It was an outstanding ball game on both sides. That’s a very good baseball team we just beat and they’re going to go a long way.”