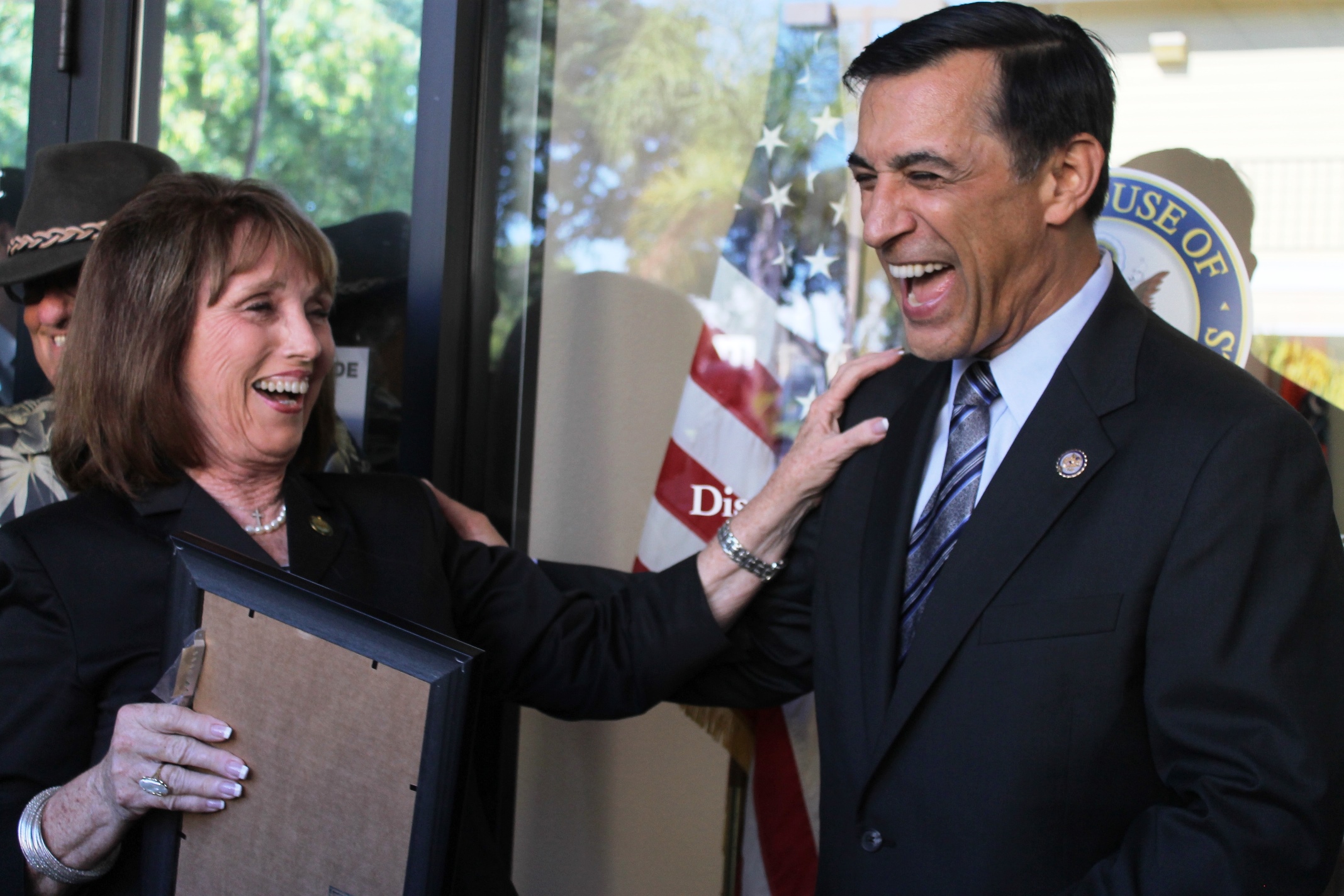 Constituents of Rep. Darrell Issa now have a direct line to his staff in south Orange County as office opens in Dana Point

Residents and leaders of south Orange County turned out in droves to welcome Rep. Darrell Issa (R-Vista) to his new office at Dana Point’s City Hall on Tuesday afternoon.

Nearly 100 people gathered, including Orange County leaders Supervisor Pat Bates and Sheriff Sandra Hutchins, and area leaders from San Clemente and Laguna Niguel to greet the congressman, introduce themselves to his staff and snap a photo or two.

“I have to start off by thanking the city manager, the City Council and the mayor for making something possible that is inherently impossible, and that is the kind of rental rate that our office got here,” Issa quipped, as the crowd erupted in laughter.

Issa said he would repay the city’s generosity by spending a lot of time in the office. He added that 12 years ago, the city of San Clemente also gave his office a deal, shortly after he became a representative for the 48th District in 2001.

Redistricting after the 2000 census removed south Orange County from his district briefly and his district as the 49th, but returned San Clemente, Dana Point, and north to Ladera Ranch back into his district (the 49th) in 2012. Issa has held an office in Vista, but until now constituents in Orange County had to make the more than 30-mile drive to north San Diego County.

In holding with tradition, the Dana Point Chamber of Commerce hosted a ribbon cutting ceremony where area dignitaries presented Issa with certificates of recognition. The mood was light as Bates, Hutchins and representatives from Assemblywoman Diane Harkey’s and state Senator Mark Wyland’s offices joked about redistricting and south county attire.

“We have to teach you how to dress,” said Mayor Steven Weinberg, casually dressed in slacks and a Hawaiian print shirt, to the suit-clad Issa as he presented his office with a plaque from the city.

As soon as the ribbon cutting ended, constituents crowded around Rep. Issa to address their concerns and expressed gratitude that his office would now be more accessible.

With Issa’s district saddling Camp Pendleton, he said the need for two offices, one north and one south of the base, became a necessity. Serving the district from a time of peace to one of war, Issa said Marines and sailors have deployed out of Camp Pendleton at higher rates than any other American base, and their sacrifice must be honored.

He said his office hopes to provide veterans, active duty members of the military and their families the tools needed during deployments and thereafter.

It is a commitment to the military that members of the Veterans of Foreign Wars, Post 9934, who now share a common wall with the congressman, hope to build a relationship off of.

“As far as veterans go, and for me as a service officer, and the five others on our team, it makes them more accessible if they are here two days a week,” said Bob Fowler, who volunteers handling veterans’ claims for benefits. “When working on claims, I don’t have to go through all the bureaucracy with the VA. It really expedites the process.”

Amy Walker, the director of constituent services, said residents of the 49th district can now set up meetings with Issa’s staff where concerns can be addressed and casework, for members of the military, can be assessed and completed.

With the Orange County office open, Issa encouraged citizens to utilize the location as a resource. The office, located at 33282 Golden Lantern, Suite 102 in Dana Point, will be open from 9 a.m. to 5 p.m. on Tuesdays and Fridays, and by appointment on all others. Issa’s Vista office, located at 1800 Thibodo Road, Suite 310, will also remain open.