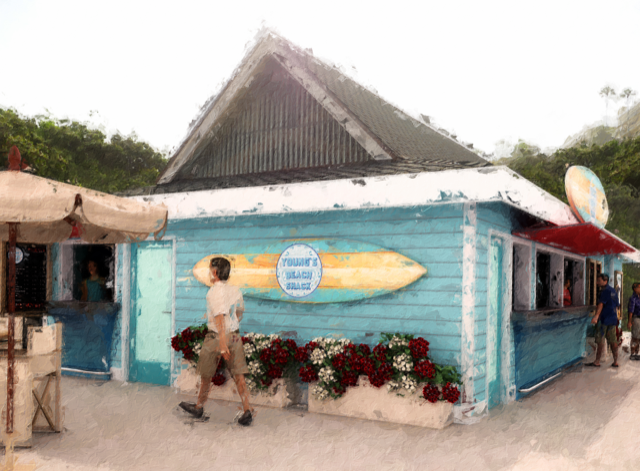 Featured Image: Pictured is a rendering of the new concession stand at Salt Creek, Young’s Beach Shack, which will pay tribute to the Young Brothers, who first ran the stand from 1925 to 1968. The concession stand is expected to open in late summer. Rendering: Courtesy of Kurt Bjorkman

The new stand, expected to open this September, will pay tribute to Jim and Steve Young, who gave up farming inland to instead run their iconic Young’s Beach Camp concession stand at Salt Creek for more than 40 years.

Before opening, the new concessionaire, 10th Hole Associates, plans to complete a full redo of the shack’s interior and “cosmetic refresh” of the exterior. Demolition has already begun, with construction to continue through the summer.

Mark Christy, managing partner at The Ranch at Laguna Beach, which is associated with 10th Hole, told Dana Point Times this week that Young’s Beach Shack aims to “restore the timeless vibe at Creek.”

“The Young brothers introduced the world to this crescent-shaped slice of heaven starting in 1925, and we’re excited about turning a new generation of beachgoers on to the OG history of this stretch of sand and surf,” he said in an email.

Christy explained that the design of the renovated stand will try to replicate the weathered design of the Young brothers’ original beach shack.

“For longtime locals, when considering a concept for a beach concession at Salt Creek, the choice was pretty obvious,” Christy wrote. “I grew up here, and our family wagon hit these sands back in the early ’60s. I’ve also had the honor of hearing Dick Metz and the late, great Hobie Alter talk story about the earliest days of both Creek and Killer Dana.”

“We hope to make it the new go-to for both local surfers and residents who want to enjoy some epic and elevated offerings in terms of food and beverage in an incomparable setting with front-row views of the lineup just offshore and the sunset that inspired the original (The) Endless Summer poster,” Christy continued.

10th Hole last month secured the lease for the county-owned concession area, formerly Zach’s Salt Creek, following approval from the Orange County Board of Supervisors. The 10-year lease begins on May 1, and includes an option to extend for up to two additional five-year terms.

Consistent with The Ranch and Lost Pier, 10th Hole’s focus will continue to be on sustainability at the new concession stand.

Striving to receive an “Ocean Friendly Restaurant” designation from Surfrider Foundation—recognition The Ranch and Lost Pier have already received—Young’s Beach Shack will not use single-use plastics, offering compostable disposables while aiming to reduce disposables, and offering reusable containers.

Seafood and produce will be locally sourced, and food waste will be sent back to The Ranch to be composted. In addition, oils from the new stand’s fryers will be turned into bio-fuels or soaps by an outside company.

“We focus on making the locals proud as we live and work here, so bring on those suggestions,” Christy said.