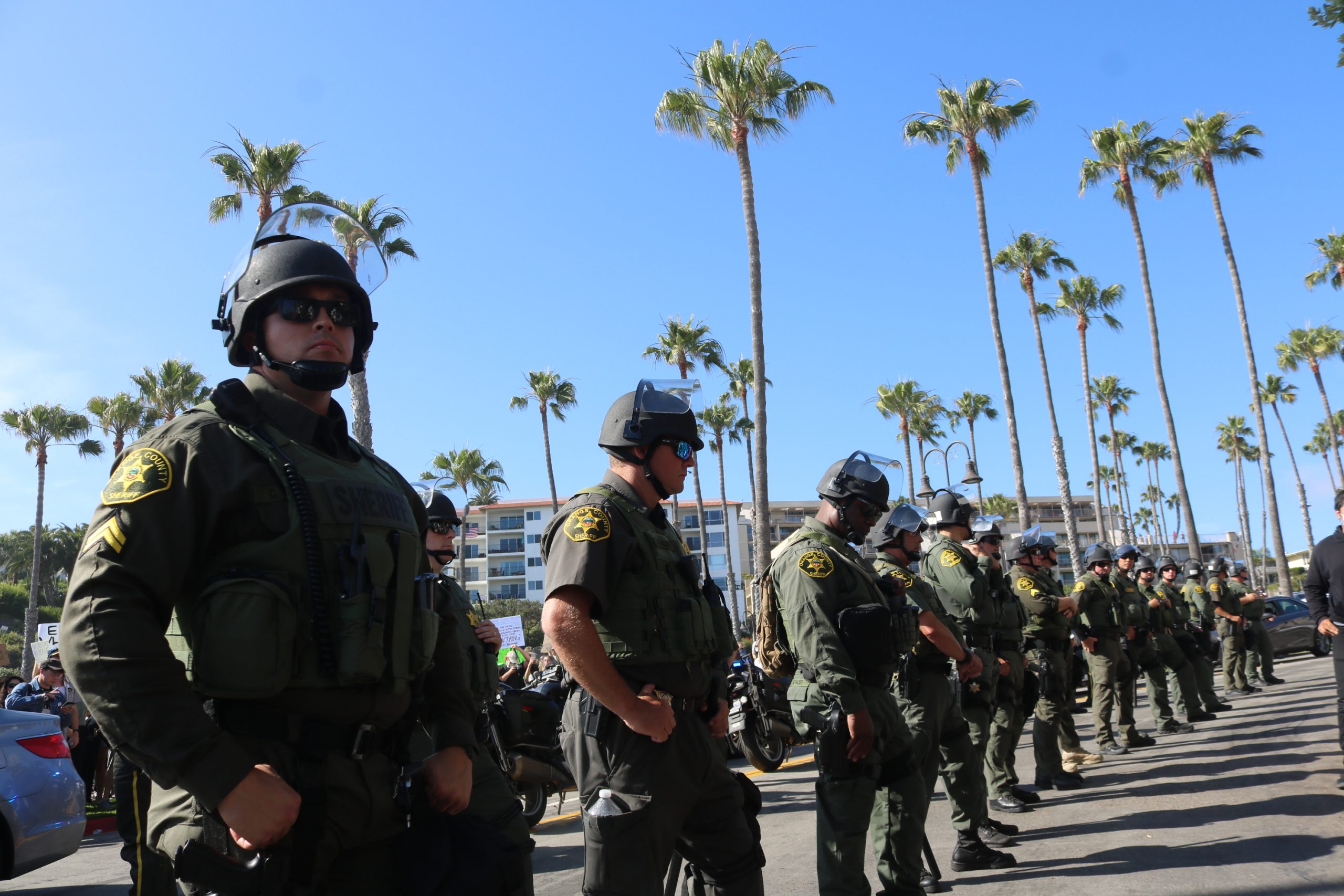 Photo Above: Deputies with the Orange County Sheriff’s Department patrol the ‘Black Lives Matter’ protest on May 31 in the San Clemente Pier Bowl. Photo: Lillian Boyd

UPDATE: House lawmakers on Wednesday, March 3, passed the police reform bill, named in honor of George Floyd, in a 220-212 vote that was largely along party lines with only two Democrats voting against it.

The measure, which was initially introduced and passed in the House last year, in the wake of Floyd’s death while in police custody, now goes to the split Senate where Vice President Kamala Harris holds the tie-breaking vote.

Below is the initial report

Attorneys representing Kurt Reinhold’s family in a wrongful death lawsuit against the county are looking to bolster their argument in a new court filing that reflects newly released dashcam video of the involved deputies’ actions just before the fatal Sept. 23 police shooting.

In an amended complaint filed in federal court on Tuesday, March 2, the Reinhold family’s legal team argued that the two deputies who stopped Reinhold for an alleged jaywalking violation did so “without reasonable suspicion that he had committed a crime.”

“So now it’s not just they used excessive force when they tackled (Reinhold) to the ground and shot him and killed him, but now the initial stop was inappropriate altogether,”Neil Gehlawat said of the court filing on Tuesday, adding: “These officers had it out for him.”

Last month, the Orange County Sheriff’s Department released the new footage, showing the two homeless outreach officers stopping Reinhold for jaywalking, which turned into a heated exchange and altercation that eventually led to one deputy shooting Reinhold, who is believed to have reached for an officer’s gun.

In the video, the two deputies, parked in their patrol vehicle across the street, can be heard speculating whether the 42-year-old Black homeless man was going to jaywalk moments after exiting a nearby liquor store where he had purchased snacks.

OCSD has cited other video evidence to support the belief that Reinhold had tried to grab the firearm of one of the deputies during the afternoon scuffle that ensued outside of the Hotel Miramar on El Camino Real.

In December, the Reinhold family, including wife Latoya Reinhold and mother Judy Reinhold-Tucker, had filed the lawsuit against the county and the officers—later identified as Eduardo Duran and Jonathan Israel. The family alleges that the deputies had escalated their encounter with Reinhold by using excessive and unreasonable force against him.

The suit also argues that the deputies had violated the late Reinhold’s Fourth Amendment protections from unreasonable searches and seizures, and that the county’s training polices are inadequate in addressing certain circumstances.

“New video evidence of this incident is deeply troubling and raises serious questions about how this kind of tragedy can be prevented in the future,” Rep. Mike Levin said in a prepared statement last week. “While investigations continue, it is clear that we urgently need reforms to improve de-escalation training, racial profiling training, and lethal use of force standards.”

Levin’s remarks on the local shooting came as he and nearly 200 other House Democrats joined fellow California Congresswoman Karen Bass in reintroducing police reform legislation last week that would, among other things, ban the use of chokeholds and end no-knock warrants in drug cases.

The measure, H.R. 1280, or The George Floyd Justice in Policing Act of 2021, would impose sweeping changes on federal, state and local law enforcement by prohibiting racial and religious profiling, requiring the use of body cameras, and limiting the amount of military-grade equipment that agencies receive.

If enacted, the bill would also eliminate qualified immunity for police officers accused of violating an individual’s constitutional rights, allowing such individuals to recover damages in civil court.

“I think that legislation is great, and it’s a step in the right direction,” said Gehlawat, one of the Reinhold family’s attorneys. “The various provisions of this act are designed to prevent the exact thing that happened in the Reinhold case from happening.”

Gehlawat and fellow attorney John C. Taylor continued to praise the legislation, noting that its most important aspect is the removal of qualified immunity—the legal doctrine that shields government employees accused of violating a plaintiff’s civil rights, unless that violation is “clearly established.”

The immunity doctrine has been used to protect officers from being held liable for actions done while on the job—and is something Taylor expects the defense to use in the Reinhold case.

“Qualified immunity acts as a get-out-of-liability-free card,” Taylor said. “It’ll be used by the officers in the defense in Reinhold’s case; it’s something that the family will have to overcome.”

Named after the Black Minnesota man who died after an officer had pinned him to the ground by kneeling on his neck for nearly nine minutes last May, the federal legislation would also require departments to collect and report use-of-force data, and create a national registry of problematic officers who have engaged in misconduct.

Levin, who had previously supported the 2020 version of the bill that had passed in the House before dying in the Senate last year, advocated for body-worn cameras (BWC) on OCSD’s deputies.

“We must also ensure that every law enforcement officer has a body camera, something that the Orange County Sheriff’s Department does not yet have,” Levin said. “In addition to these reforms, we must also make stronger investments in mental health and social services to better support homeless individuals and people in need of assistance.”

Last September, OCSD had secured $679,000 in funding from the county to implement a body-cam program for its deputies. At the time, Sheriff Don Banes had explained that it would likely take a year and a half to roll out the program, as he first needed to solicit bids from camera companies, draft policies for using the cameras, and then set up training.

According news outlets, Barnes had also noted that OCSD’s 13 contract cities, which include Dana Point, San Clemente and San Juan Capistrano, are expected to foot some of the costs to maintain the program.

Sgt. Dennis Breckner, spokesperson for OCSD, said on Tuesday that the department is still in the early stages of the program and that a request for proposals has not yet gone out. He also said a discussion on funding is still “premature, as we have not yet reviewed a cost estimate.”

Addressing some of the mandates in the proposed legislation, Breckner stressed that existing and new state laws, as well as recently implemented department policies, have already addressed some of the requirements that H.R. 1280 looks to impose.

The state of California, he continued, doesn’t authorize no-knock warrants unless mitigating factors are involved.

“The decision to enter without notice must be due to some exigency (for example, danger to life, destruction of evidence, flight from prosecution, etc.), but that exigency cannot be authorized before-hand by a judge in California,” he said in the email, citing California’s penal code on search warrants. With the Reinhold family’s second amended complaint filed, the county is expected to file a response to the lawsuit in the coming weeks.