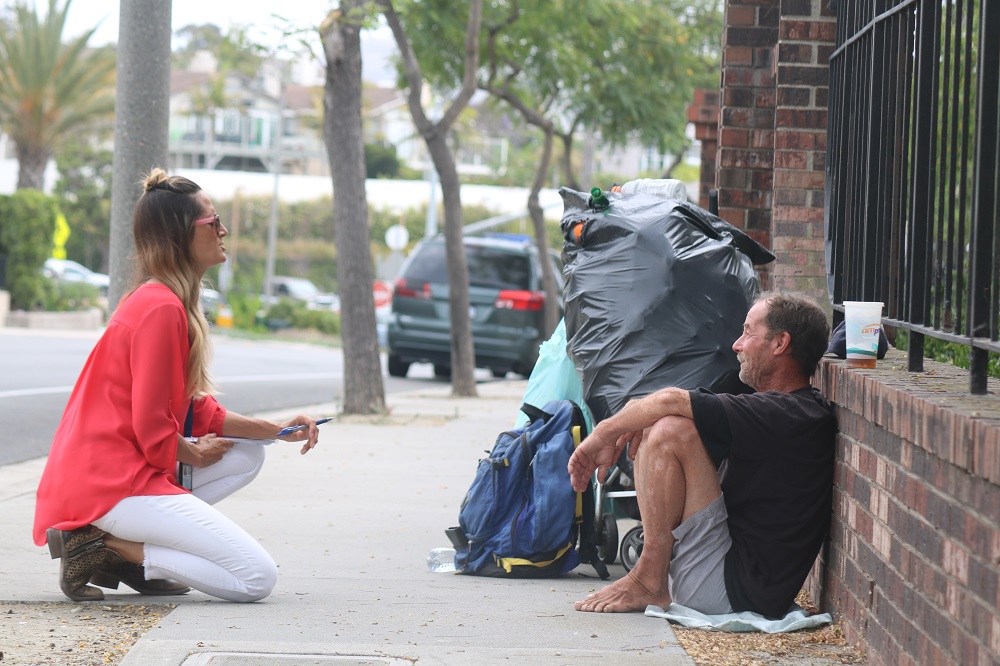 Reaching Out to Meet Halfway: Introducing Stephani Ogas, the woman at the center of Dana Point’s homeless conversation

Earlier this year, the newly re-formatted Homeless Task Force recommended to City Council that they full-time contract with Mercy House, a nonprofit based in Santa Ana who provides housing and comprehensive supportive services for a variety of homeless populations.

Stephani Ogas has been with Mercy House since September 2014. Since that time, she has worked as the Outreach Coordinator for Costa Mesa as well as in Dana Point since April of 2016. Earlier this year, Ogas and Mercy House’s outreach services were increased from only two days of outreach services, to six.

“I love my job.  I had been working with the homeless as a volunteer for two years before coming on board with Mercy House and have built some great relationships with city staff, service providers and people on the street in both cities,” Ogas said.

Dana Point Times embarked on a ride-along through Dana Point with Ogas and Orange County Sheriff’s Department (OCSD) Dana Point Police Services Deputy Tobin Anderson to learn more about a day in the life of one woman who holds the keys to reconnecting the city’s homeless to the life they want.

Reaching Out to Meet Halfway

Through the seamless plexiglass separating front and back seats, Anderson explained that early in his shift he encountered a homeless man in the Lantern District. Upon making contact with the man named Chris, Anderson said that he offered outreach services and that Chris was receptive.

After several cell phone calls between Anderson and Chris to coordinate a safe place for Ogas to speak with him, Chris emerged from an apartment complex in the Lantern District holding a bag he claimed to contain the entirety of his worldly belongings.

Ogas explained that Chris had previously been housed at a nearby Friendship Shelter housing facility intended for the chronically homeless with a physical or mental health conditions. After committing a crime, Chris was made to leave the Friendship Shelter facility and was living with his friends or girlfriend, Emily.

Complicating Chris’s living situation was that Ahe was currently taking a variety of controlled substances including suboxene and other pain-killing medicines for a chronic back injury.

“It’s what really keeps me from getting a job,” Chris said.

Ogas calmly shared that with even with his difficult circumstances, there were options and suggested Chris enlist in county services for medical detox in order to reduce his addictions and make him eligible for the large majority of homeless resources that require you to be drug free.

When Chris said that he was unable to work when off pain-killing medicine, Ogas calmly suggested that he research a Salvation Army men’s services program in Santa Ana, where homeless are able to enroll in a 30-90 day program that accepts those still suffering from drug addiction.

Ogas also gave Chris a listing of homes available in Orange County within his income level. When Chris mentioned that his father was possibly receptive to assistance, Ogas encouraged him to reach out to him to enable housing , expressing the importance of housing stability in sustaining a job and mental health.

Leaving Chris with a bus ticket to get to the Orange County Health Department in Santa Ana, Ogas and Anderson set off to their next and unfortunately more familiar stop.

After coming to a stop at the southern intersection of Del Obispo and PCH, Olgas and Anderson approach a man sitting on the ground with a shopping cart full of cans.

After spotting an open Gatorade container at Dan’s feet, which Anderson quickly determined to be vodka, Dan without argument agreed to taking a breathalyzer test where he blew a .253. At exactly 11:15 a.m., he was determined to be well above the legal limit but not a danger to himself or others.

While Anderson was writing Dan’s citation, which Dan accepted by smiling, taking the citation in his mouth and chewing up, Ogas worked with Dan to be sure that he had what medical resources he needed.

As a priority call comes over the radio, Anderson decides to leave Dan to his cans, which Anderson said he will likely recycle at the recycling center behind the Ralphs in order to pay for more alcohol.

Ogas and Anderson explained that the majority of the criminally active homeless community members are from the transient demographic. Anderson shared that this community also shows higher rates of narcotics abuse than the resident chronically homeless which generally lends itself more to alcoholism.

Years ago, Anderson was responsible for conceptualizing and rolling out the “Known Drunkard List,” which was recently revitalized and re-emphasized to local business owners by the Homeless Task Force.

This list makes local business owners aware of known criminals lending themselves to alcoholism and makes it illegal to sell to them under penalty of law. Not obeying this list comes with penalty of fines and possible suspension of their alcohol sales license.

“Most of the time, when the homeless are receptive to receiving Stephani’s help,” Anderson said, “it’s after something traumatic has happened.”

More than Meets the Eye

As a mother calmly swings her child in Thunderbird Park, Ogas and Anderson walk to the back of the park to check on a call of a possible homeless encampment.

Anderson and Ogas greet by a young couple,  surrounded by bags on the ground, and Anderson requests the male to please put out his cigarette in accordance to Dana Point’s ordinance.

Christopher Yarocki, from Cincinnati, apologized and quickly began to explain that he and his wife Katherine Colella, originally from Virginia, were in transition to a new sober living facility after recently leaving one in Laguna Beach.

“South Orange County is like a sand-trap,” Yarocki said, who said that his insurance had recently been exhausted by the Laguna Beach facility.

Ogas asked the couple how they had been finding their sober living home options.

“Word of mouth,” Colella responded. She compared a few of her sober living homes to “trap houses” where it was as easy to locate drugs as on the street.

Ogas recommended that the young couple resource their insurance companies directly in order to reach out to recognized and regulated facilities.

“I’ve never had anything like this,” Collela said, referencing Ogas recommendation. “We’ve never had anyone actually help us. We just want to get back on our feet. We were in such a good place, and maybe we can get there again.”

“In terms of activity, our ride was somewhat routine.  However, the unique part was that the individuals we encountered that day were representative of the diverse types of individuals we work with in this industry, such as the chronically homeless, service resistant, mental health, substance abuse and formerly sober living residents.,” Ogas said of the Dana Point Times ride-along experience.

“Collaboration is critical to our success and ability to make a positive difference in people’s lives and in our city. That’s why having Stephani and Mercy House in our community has been a tremendous asset.  Through our contract with Mercy House and in collaboration with other organizations in the community, we have been able to house seven previously homeless individuals since January and have made more than 150 links to services for those who are working to get off the streets.  Mercy House provides compassionate and valuable field support to the daily dedicated work of our Police Services and Public Works, in addition to being responsive to resident and business inquiries,” said Kelly Reenders, City of Dana Point Economic Development Manager

With the diversity of causes as well as solutions to homelessness made clear, connectivity to vital resources is necessary. Through Ogas and Mercy House, the City of Dana Point has stepped out of the meeting room and most people’s comfort zones to help end the need for homelessness in Dana Point.