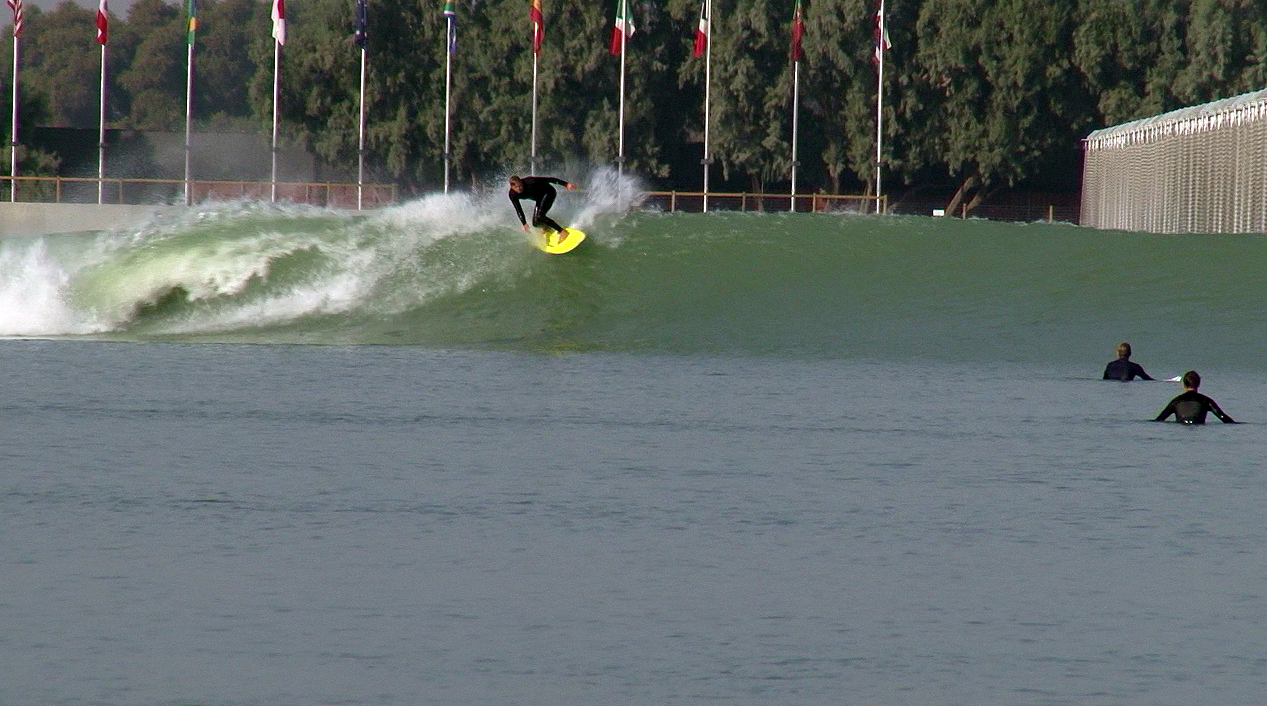 Last November, a few days before Thanksgiving, the opportunity to take a spin at the Kelly Slater Surf Ranch in Lemoore, California landed in my lap.

“Don’t say anything,” read the email from the World Surf League’s (WSL) Dave Prodan, and up until the media embargo ended a few days ago, I’ve managed to stay mum on the subject.

Part science fiction, part miracle of science, the facility is situated off of a nondescript country road in Central Valley cattle country. The landscape is flat and brown. The air smells of manure, and the mornings are crisp and cold. A few miles away is an Indian casino. Merle Haggard vibes are omnipresent. It’s a weird place to go on a “surf trip,” but then again it’s an even weirder place to find one of the world’s best waves.

So, what’s it like? Thrown in the pool with a bunch of other notable surf journalists, all we could do was scratch our heads and keep uttering, “What a trip.”

The wave is as good as or better than you think. It possesses a surprising amount of power. It moves really fast down the 700-yard pool. They’ve designed it so the take-off is relatively easy; not too different than catching a four-footer at Trestles. But as the wave moves down the pool it picks up speed, hitting shallow sections that provide a running tube section that’s akin to Kirra on the Gold Coast of Australia. From a purely wave-riding perspective, it’s a dream.

But I still don’t know if it’s surfing. Last week, with a minor south swell in the water, I surfed T-Street. It was waist-high with wedge-y little peaks scattered up and down the beach. In my hour in the water, I was able to catch a bunch of lefts and rights, some better than others. But by the time I got out of the water, I felt like I’d gotten some exercise and surfed myself into a decent rhythm.
The Surf Ranch is different. Right now, technology allows for one wave every five minutes. That means there are only 12 waves an hour. In my session at the Ranch, I felt a lot of pressure to make the most of the waves because I simply wasn’t going to get that many. In eight hours I was able to ride nine waves, and to this day I’m still kicking myself because I blew two rights just as I hit the tube section.

The other trippy thing is that your buddies are lined up down the pool to catch the “scraps” if you fall. So, while everyone wants to see their best mate get the wave of their life, you’re secretly rooting for them to wipeout so you can pick off the rest of their wave and potentially get your wave count up.

The science behind the wave is largely the work of Adam Fincham, a researcher at the University of Southern California. Slater first approached Fincham with the idea back in 2006, around the same time he founded the Kelly Slater Wave Company. Fincham had limited surfing experience, instead focusing his scholarly energies on topics such as “digital particle imaging velocimetry for laser diagnostics” and “decaying grid turbulence in a rotating stratified fluid”—hardly the kind of surf banter one hears in the Lowers lineup.

After endless experimentation and computer modeling, the artificial waterski pool the team discovered in Lemoore proved to be a godsend. Measuring 700 meters long and 150 meters wide, it provided them with the room (and privacy) they needed to develop the wave. A massive hydrofoil was built and installed under water. The hydrofoil was then attached to an electric motor to pull it down a track at an upwards of 20 MPH. The size of several train cars, it’s rigged with cables and sits on a track on over 150 truck tires. The hydrofoil is pulled from one end of the pool to the other creating a right-hander, then pulled back to the other end of the pool, creating a left-breaking wave. The bottom of the pool features different slopes and contours to create different sections of the wave. The bottom of the pool has a spongy feel akin to a yoga mat.

The Surf Ranch is incredibly cool. And like I said, the wave itself definitely lives up to the hype. It’s as good as any wave I’ve ridden anywhere around the world. But I’m still not convinced it’s surfing. Wave-riding, yes, but surfing? I don’t know. There’s no sneaky set waves. No seaweed. No sharks. There’s no sandy feet or salty hair. There’s no element of randomness and surprise. In my mind, all of that stuff is part of the surf experience, and while I had the time of my life in Lemoore, there’s still nothing better than a good day at the beach.