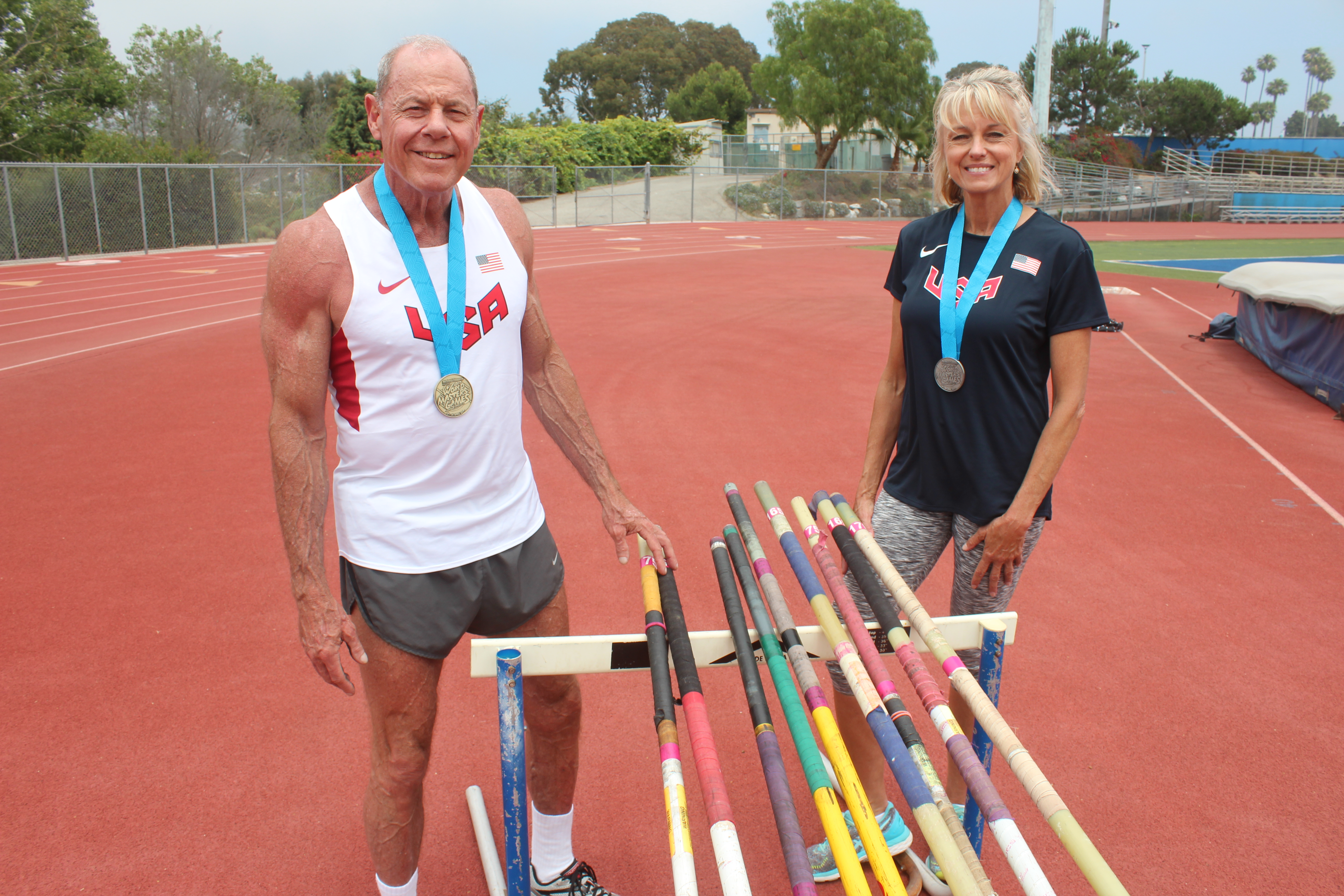 Newlyweds Bubba Sparks and Melanie Hays decided to do something special for their honeymoon.

The two former college sweethearts reconnected on Facebook five years ago, and tied the knot just weeks before hopping on a plane to Auckland, New Zealand to compete alongside one another at the 2017 World Masters Games in April. It turned out to be a trip of a lifetime.

Sparks is a 63-year-old former collegiate pole vaulting champion, and he won the gold medal in his age division at the event. Despite being a relative newcomer to vaulting, Hays, 59, finished second. Both came home with shiny new medals to match their new wedding bands.

Two times a week, Sparks and Hays, who live in Dana Point, can be found out on the track at Dana Hills High School practicing their vaults. To see the two in action is a sight to behold.

Sparks has the muscles and athletic build of a man half his age. He uses them to propel him skyward as he perfectly times his takeoff and easily clears the bar set 10 feet above the ground.

Hays has a tall, slender build that Sparks says is perfect for pole vaulting. Longer limbs lead to more leverage and power, which she uses to routinely clear the six-foot mark.

The two are usually joined by a Dana Hills student or two looking to stay in shape and get better over the summer. Everyone takes turns during the impromptu sessions, providing encouragement and advice to each other along the way.

Sparks and Hays use the practice to stay in shape and help fine tune their mechanics for several big pole vaulting events each year. Sparks is preparing for a competition in Michigan in three weeks.

Getting older hasn’t stopped them from setting new goals.

“It’s not like we can get stronger or faster because we’re going the other way,” Sparks said. “But we are trying to cheat age by using better technique. That becomes a challenge and makes it fun.”

Sparks’ pole vaulting background is extensive. He was 12 years old when he saw someone pole vault in a commercial for the first time. He thought it was the coolest thing he’d ever seen.

While attending high school near Houston, Texas, Sparks was a two-sport standout in track and field and football. He played both safety and wide receiver, and received a full athletic scholarship to play for legendary coach Darrell Royal at the University of Texas. The offer was tempting, he said, but pole vaulting was his true passion.

“I didn’t like that I could have that side that would be violent. I liked the intellectual aspect and challenge of pole vaulting. It’s figuring out the combination of physics and getting your body in position,” Sparks said. “There are so many things you can work to improve on, it’s like a puzzle.”

Sparks decided to take a half-scholarship for track and field and attend Southwest Texas State, now known as Texas State University. It was there that Sparks and Hays met and first started dating.

Sparks would go on to have a distinguished amateur pole vault career, winning the NAIA championship twice his junior and senior years.

After joining the workforce as a Wall Street investment banker, Sparks gave up on vaulting. His once athletic frame ballooned and he grew to be 70 pounds overweight when a dream finally slapped some sense into him. He was dreaming he was pole vaulting one night, and when he woke up and saw himself in the mirror, he broke down and cried.

A chance advertisement in a Southern California newspaper lured Sparks to UC Irvine for a masters track and field meet that same year, in 1988.

“I saw an 86-year-old guy pole vaulting … I saw a 64-year-old lady jumping and I thought I’d found a home,” Sparks said.

Reinvigorated, Sparks returned to the vaulting community. He would go on to assist the USA vaulting coaching staff for the 1996 Olympic Games and win the pole vault at the World Masters Games in Sydney in 2009 and finish second at the games in Torino in 2013.

It was around that time that Sparks and Hays, a gal from Alpine, Texas with a charming southern drawl, rekindled their relationship.

Hays took naturally to pole vaulting. She played basketball in high school, and associates the movements of a vault with the feeling of making a layup, focusing on hitting certain marks with her feet and hands.

Hays had been practicing pole vaulting off and on for three years before the pair decided to compete together at this year’s World Masters Games. The Games featured more than 25,000 athletes ages 35 and up from over 100 countries competing in 30 different sports.

Hays didn’t jump as high as she normally does at the Games, but it was her first big-time event. She is not the super-competitive type, and is still coming to terms with the fact she won a medal at a world championship.

“I don’t think I could connect to it because I got over some bars and I tried to make sure I at least did that. Maybe someday it will sink in more,” Hays said with a laugh. “But I still did what I had to do to get a medal.”

“I know how hard it is, how stressful it is and she just walked through it like a pro,” an emotional Sparks said when describing his wife’s jumps at the Games. “To get second place is shocking. She just blew me away.”

Sparks took home the gold medal in the Men’s 60 division.

The two are now preparing for next year’s World Masters Outdoor Track and Field tournament in Málaga, Spain.