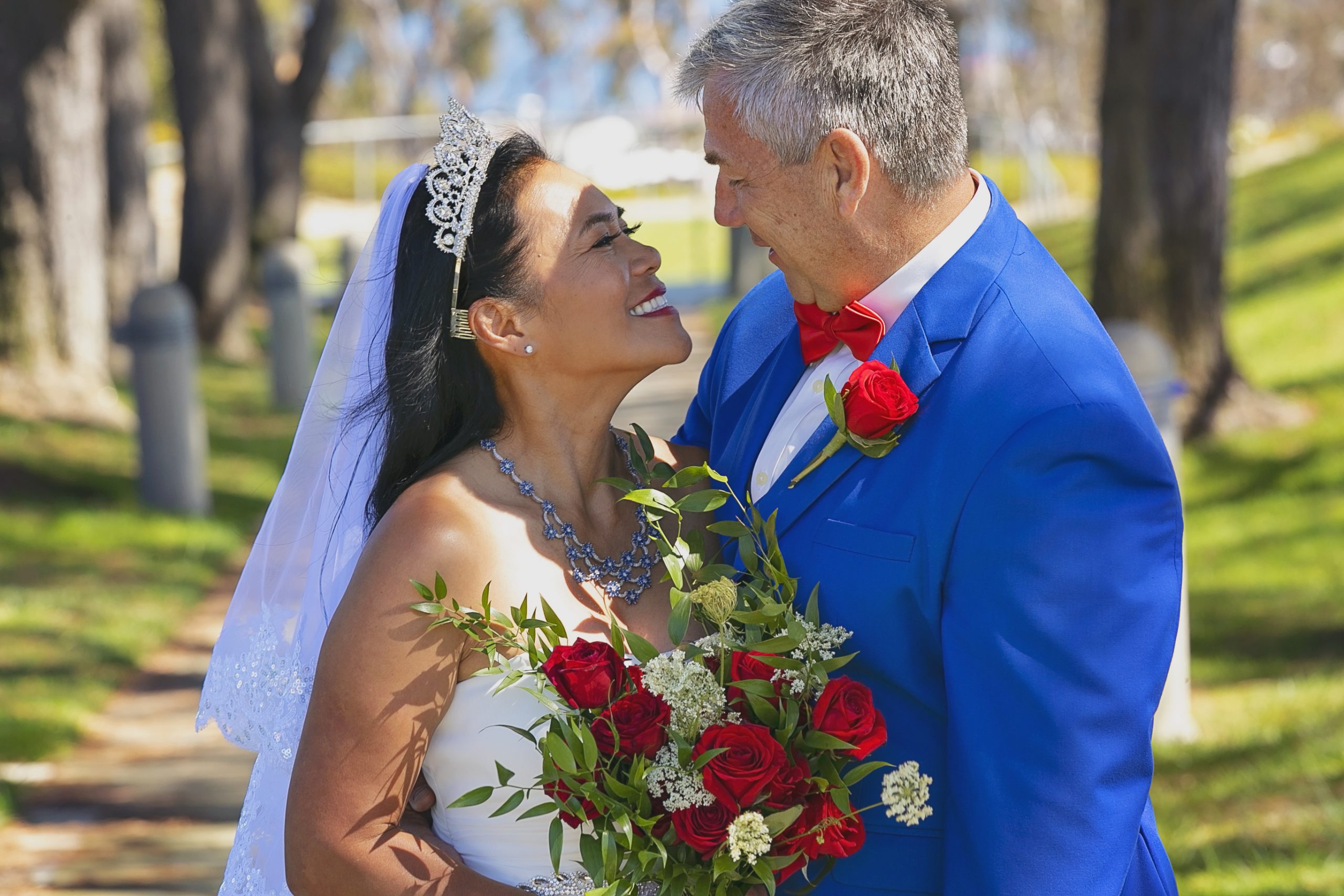 Mark had served 23 years in the U.S. Army, retiring in 2008, and has since worked as a defense contractor in Hawaii. Jean emigrated from the Philippines and has worked as a special officer for Orange County Sheriff’s Department and has been with the agency since 1999. It took the prodding of mutual friends, and some phone tag, but Mark and Jean eventually hit it off over the phone—despite the ocean between them.

On a whim, Mark booked a flight to meet Jean in person for the first time in Orange County in November 2018.

“He flew in the night before Thanksgiving,” Jean said. “But I have a tradition. I run the Turkey Trot in Dana Point every year and normally do the 10K.”

Mark asked if they could instead do the 5K event since he hadn’t been running. They struck a compromise.

“I picked him up at the airport in the middle of the night,” Jean said. “He went to sleep in the living room, and I said to him, ‘All right, I’ll see you in the kitchen at 5 a.m.’ ”

Mark and Jean continued to see each other over the holidays, sharing a first kiss under the “Merry Kiss Me” sign at the Dana Point Harbor and going on a date at Jon’s Fish Market. It was at a bench overlooking the Pacific where Mark asked Jean to officially be his girlfriend.

“I need to pray about it,” Jean says she told him. “But when it came time to drop him off at the airport, I told him yes.”

As the year progressed, the 2019 Turkey Trot neared, and Mark signed them up for the 10K race this time—with something special planned for the finish line.

“For me, it was Jean’s aura of warmth that drew me to her,” Mark said. “She’s so together. That’s how I knew I loved her.”

That Thanksgiving morning, Dana Point saw tumultuous rain and flooding. Runners were drenched and signage was swept away, and while the weather threw a wrench in the day’s event schedules, the 10K race proceeded. Mark said he had to keep patting down his pocket to make sure the ring was still there. And as the couple celebrated their completion at the finish line, he dropped down to one knee.

“I thought he pulled a muscle and fell at first,” Jean said. “When he asked me to marry him, I said I needed to pray about it. But it was the shortest prayer I’ve ever made. I said yes.”

Jean says she was drawn to Mark’s sense of humor, humbleness and easygoing outlook on life. But beyond those qualities, she says this is a love story about redemption. Working as a single mom, Jean says life toughened her up. But nothing could prepare her for the loss of losing all three of her children.

“My middle child was stillborn. I lost my daughter Jaqueline to cancer and my daughter Rae to a fatal car accident,” Jean said. “I did not have the capacity to love.”

After winning a court battle for custody of her grandson, Jean was not only a single, working grandmother but her grandson’s primary caregiver.

“My whole life, I was just focused on my career, focused on being a single mom, then single grandma. Then Mark came along,” Jean said. “It’s this story of redemption, forgiveness and love . . . and telling my heart to beat again.”

Mark and Jean got married at Lantern Bay Park in August. While they currently reside in Mission Viejo, they say Dana Point holds a special place in their hearts.

“You don’t see too many communities where you feel like family,” Mark said. “Dana Point is just that. Everyone at the City, all the business communities, they just go above and beyond to make you feel special and welcome. We couldn’t imagine having our wedding anywhere else. We even had our rehearsal dinner at Jon’s Fish Market.”

As is tradition, Mark and Jean plan on running this year’s virtual Turkey Trot race together.