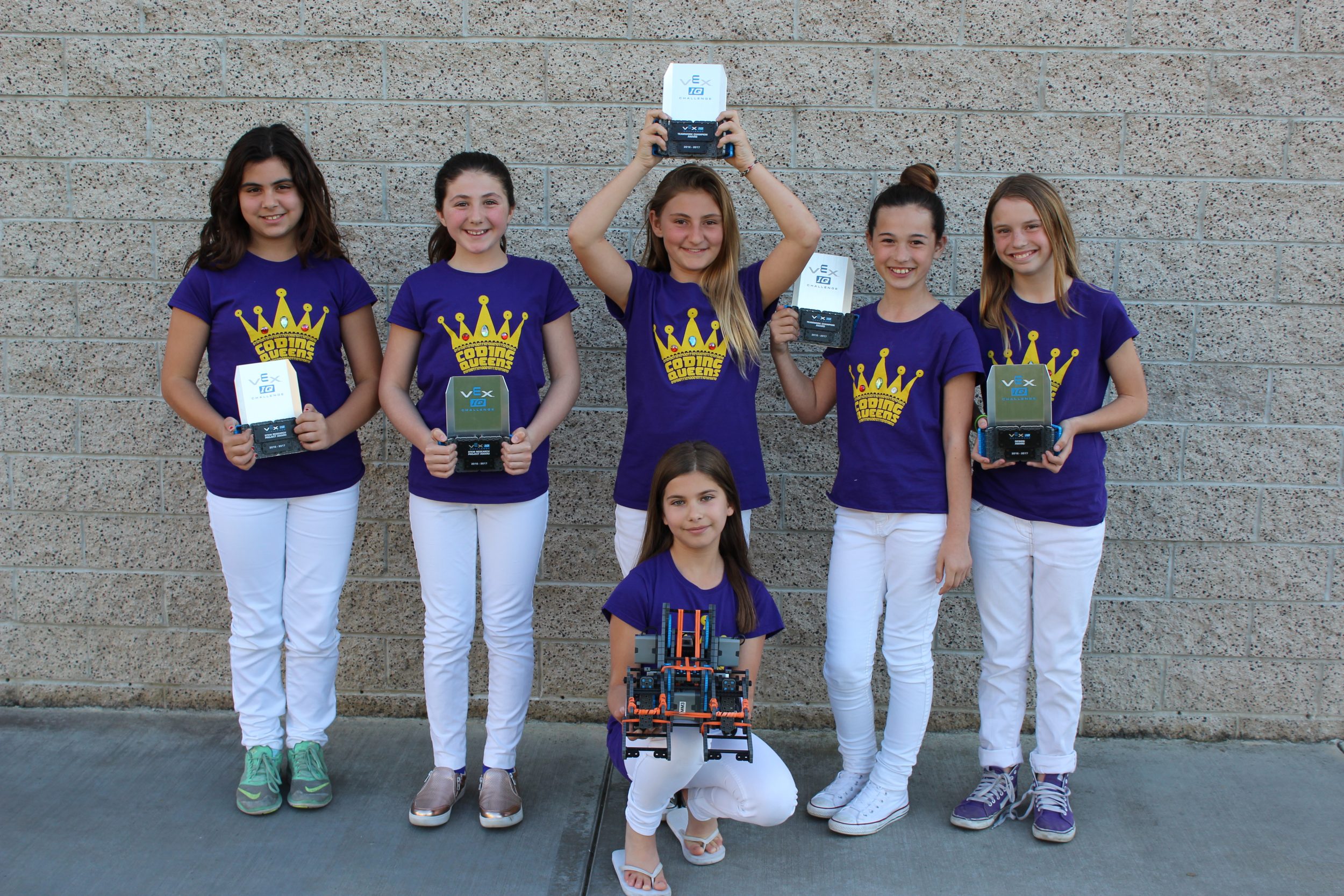 Queens of Coding: An all-girls robotics team uses their skills and passion to compete in a technological world

Riley Divel and Maryan Malkosh work with volunteer coach Yazan Malkosh on the game board. Photo: Courtesy of the Coding Queens

The Coding Queens of John S. Malcom Elementary are an all-girls robotics team. They have competed in regional competitions and will be making their way to the World Championships in Kentucky. Photo: Kristina Pritchett

They may be small, but they are mighty. They’re known as the Coding Queens, and while they discuss their robot “Zippy” and wear T-shirts with their crown logo, it’s easy to see why.

The group of John S. Malcom Elementary School fifth graders compete in VEX Robotics competitions, in which they design, build and code robots to do specific actions.

“They have to sit down and come up with a robot that would accomplish the tasks of this year’s game,” said San Clemente resident and John S. Malcom Elementary teacher Mona Reimer. “It’s not the Ikea kit; there are hundreds of little pieces.”

This year’s game has the girls working with another team during a 60-second long match to score points by using robots to move “Hexballs” into a colored zone and then parking and balancing both robots on a teetering bridge.

There’s also an autonomous aspect of the competition where the robot is running all on code. Then there is a project to integrate Science, Technology, Engineering and Mathematics (STEM) lessons. The Queens’ project is a robot that can help clean plastic from the ocean.

“The topic was technology in our communities, and we decided the ocean is a big part of our community,” said team member Adalee Geiss. “We looked into how a robot can help clean up the plastic, and that’s the SeaVax.”

The SeaVax is a solar and wind powered ocean vacuum ship that’s designed to filter and process plastic waste from seawater.

The girls are 10 and 11 years old and reside in Dana Point, Laguna Niguel and San Juan Capistrano. Many of them play more than one instrument, are involved with sports and now can say they’re going to compete in a world championship.

“As a coach, I got a packet of how to coach girls, and it said you might find they are a bit more passive and their opinions may be hindered down with the boys around them, but that was not this team,” said volunteer coach Yazan Malkosh. “They were very opinionated and very strong in regards to how they thought things should work.”

Around him, the six girls smiled and nodded. They agreed that they’re all opinionated, especially when it comes to “Zippy.”

“They have a methodology of how this team should work,” Malkosh said. “I found that everyone is a leader; it’s something we’re still working on.”

Reimer has been teaching science in Capistrano Unified School District for more than 30 years and has been a leader of the robotics team for the last five. This is the first time she’s had an all-girls’ team.

So far, they’ve been successful.

“They’ve come out in first place in Alliance two times and second place once. Their design notebook has won them a ticket to State,” Reimer said. “Our goal is to continue to do well so they have the opportunity to compete in a truly international competition.”

At the time of the interview, the Coding Queens’ goal was to make it to Worlds, and come the afternoon before print deadline the parents on the team found out that their goal was about to become reality.

The girls have met in The Cave, a condo where their supplies are kept, every Sunday for at least two hours, they said, and sometimes more during the week.

“It’s unbelievable that they’re able to do all of that while they’re in school,” Malkosh said.

Riley Divel said the group enjoys what they do and loves getting to spend time together.

“I really like working with girls who want to do what I want to do,” Riley said. “I love to be able to work with people who are like, ‘Yeah, come on, girl power!’ It’s really amazing to not be able to have these friends at school but to have them on such a great team and great coaches.”

Not only are the girls learning important skills for future careers, but Malkosh said since they work with other teams during the competition, it teaches them about negotiation.

“The game board is set, but the other team’s robot you have no clue what it could be,” Malkosh said. “You might be set up with a large robot that’s difficult to maneuver.”

A few of the girls said they hope to work with engineering or robots in the future, for which they believe this program will prepare them.

“It’s amazing how six girls from an average place can make a difference,” said Maryan Malkosh, a team member. “It’s really amazing how we can build a robot, program it, design it and enter it into competitions.”

Sophia Mantucca said her favorite part of the program was that her teammates were so positive.

Team member Lily Placey agreed and added that the program was amazing.

“I know probably when my mom was younger she didn’t have this kind of program,” Lily said. “Now that we have it, it can really start our futures. We all have big dreams.”