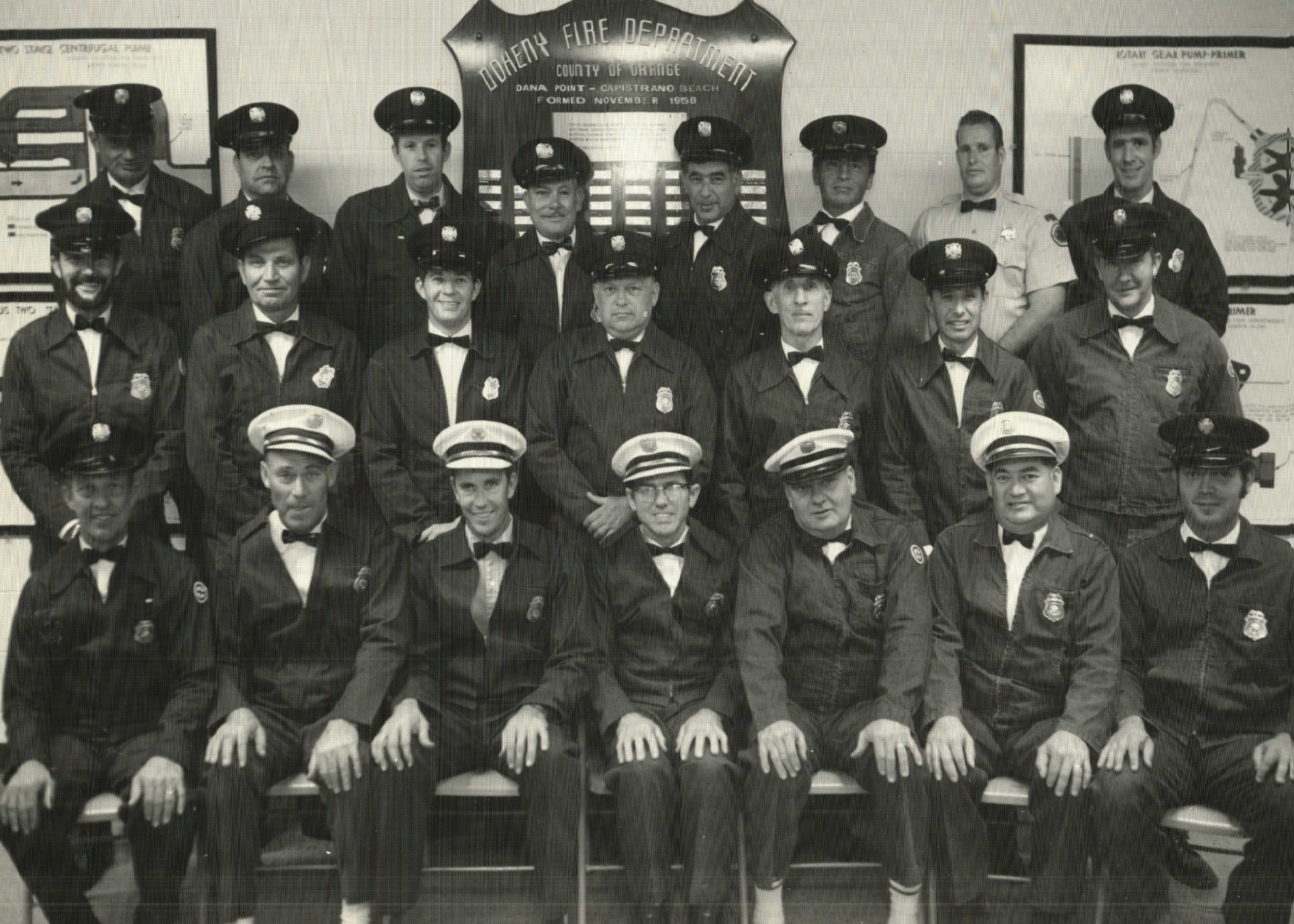 Preserving the Service, Sacrifice of Station 29

Plaques and letters of commendation line a wall of Melvyn Pierce’s Dana Point home. Seamlessly blending with photographs of grandchildren, travels and needlepoints created by Helen, his wife of 65 years, the awards and recognitions highlight a life devoted to family and service.

Pierce came to Dana Point in the 1930s. His family home still sits on Chula Vista Avenue, and Mel and Helen still live in the neighborhood. They’ve called their house overlooking the city home since the early ’60s.

The landscape has dramatically changed over the last few decades, Pierce notes as he shows off fire-engine red poinsettias in his backyard. Homes have filled in, the city has incorporated and the fire department is no longer staffed by volunteers, he says, something near and dear to Pierce’s heart.

Pierce was among the first volunteers to serve on the Doheny Fire Department crew, which he helped establish in 1958. Up until 2002, volunteer firefighters served Dana Point out of Station 29, located in the Doheny Village area of Capistrano Beach.

That’s 44 years of service that local men and women dedicated to their community.

Volunteer service was slowly phased out locally, starting in the late ’80s, when Dana Point became a city, the Orange County Fire Authority was contracted for staffed, paid firefighter positions and training regiments and commitments became too much for volunteers to juggle.

For Melvyn Pierce, it was a 25-year commitment that meant time away from his family as he dashed from meals at the sound of the city’s now-retired fire siren that rang at all hours of the day and night, time spent away from his laundry business and sleepless nights responding to local emergencies.

Despite the personal sacrifice, it is a time the World War II Air Corps veteran remembers fondly.

“The camaraderie was great,” Pierce said of the crew that became more like a family. “It was just about the dedication to service for the community,” he added. “At the time it was a necessary thing to do. We volunteered to serve the community and to protect homes and people.”

It is a storied past former volunteer Don Croucher hopes to preserve for generations to come.

Croucher’s home is a fire museum.

Small collectable fire engines neatly line his shelves. Numbering in the hundreds, they’re tucked near the garage, where filing cabinets, photo albums and boxes contain pieces of the area’s past.

He started collecting memorabilia when he was a young volunteer on the Doheny squad. His volunteer service aboard the 25-member Station 29 crew jump started his three decade-long career in the California Department of Forestry and OCFA, which he retired from in 2001 as an engineer.

“It was my cup of tea,” Croucher said of the position he held for decades. As an OCFA engineer, Croucher drove the fire rigs, maintained water pumps during fires and cared for the engines—he also had to give up volunteering at Station 29. But that station helped Croucher find his niche.

Station 29 also served as a stepping stone for Croucher’s son Gary, who after becoming a part of the Doheny Fire Department’s young explorer program, also went on to serve in the Forestry Department. He is now a forestry fire captain in San Diego County.

It was a familiar route traveled by other volunteer firefighters’ sons, as Pierce’s son, Dave, and fellow 25-year volunteer Mel Weibel’s son, Steve, served as Station 29 volunteers—truly making the brotherhood a family operation.

For Weibel, a 48-year Capistrano Beach resident, having his son around the station was enjoyable, but when calls came and the crew was dispatched to an emergency, the tides shifted and worry set in.

“It was fine until you were on a fire, then it was really scary,” Weibel said. “His mother wasn’t really into it. But our department was more of a family, almost all of the men who had sons, they became volunteers and many went on to serve in a greater capacity.”

Dave Pierce remembers his time on the crew differently.

“I was always intrigued that my dad would get up from the dinner table or in the middle of the night when the siren would go off … sometimes I rode down to the station with him and enjoyed the camaraderie,” Dave Pierce recalled.

As a recent San Clemente High School graduate when he joined the volunteer crew, Dave was invincible; the worry felt by parents didn’t necessarily resonate with their young hotshots, he said.

“You could be having a lot of fun at the fire station doing training and joking with each other, but once you got a call it really did turn into all business,” Dave Pierce said. “Even though he was my dad, if he was the officer on the fire engine I still listened to him as if he was in that role and not my dad.”

Dave Pierce volunteered under his father’s command for three years before joining the Department of Forestry. He went on to have a 35-year career in the field. Dave retired from OCFA an assistant chief at headquarters where he handled strategic planning, legislative measures, fleet management and more.

It all started right down the road, he said, while pointing toward Capo Beach.

“It was more than I ever expected,” he said. “Every single thing was the best thing that I ever did. It was an exciting career. And what goes along with that is this incredible brotherhood and sisterhood of people … it truly is a family.”

A decade ago, Croucher and a local coalition of stakeholders began the California Fire Museum and have since worked to collect and preserve memorabilia from stations across California—with extensive collections predominately pertaining to Orange County’s fire protection history.

“Even though it is called the California Fire Museum, right now we are focusing on Orange County,” Croucher said of the monumental task to document the entire state’s fire history.

“Orange County has lost a bit of its history,” Croucher said. From CDF, to county and now the fire authority, many Orange County stations have undergone multiple leadership changes involving cleanups and start overs, he said, meaning bits and pieces of the past have been tossed.

As stations from San Clemente to Buena Park have incorporated into the OCFA system and older firefighters and collectors have passed on, the museum’s collection has grown.

With 10 historic fire vehicles, a library full of literature, black and white photographs, newspaper clippings and collectables, the nonprofit California Fire Museum has a museum’s worth of fire history to share.

For years, the group has worked to establish a museum space. It’s been a labor of love, Croucher said.

When OCFA began building a new headquarters, 6,000 square feet was added for a museum. But with the closing of the El Toro Marine Corps Air Station in Irvine, organizational leaders felt the Orange County Great Park would be a better fit.

Croucher said the nonprofit has an affiliate agreement signed with the Great Park, but a site still needs to be set aside. Eventually, the organization hopes to build their museum with a hands-on safety learning center with exhibits on fire prevention, water safety, disaster preparedness, first-aid and more.

Museum plans have not yet been finalized, but Croucher said a general plan is in the works and will contain bits and pieces of Station 29’s history.