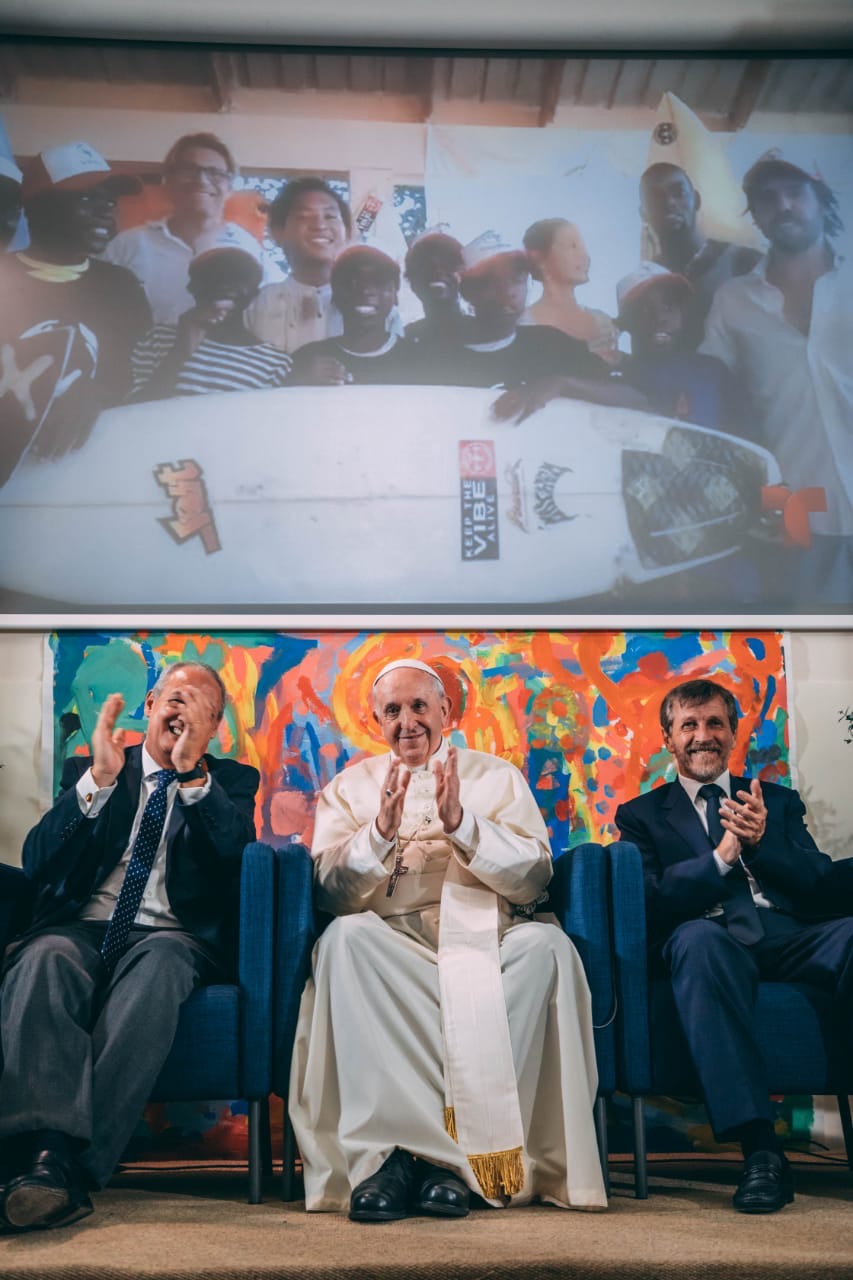 Pray for Surf: Pope Francis I, Kelly Slater, the Gudauskas brothers and some stoked kids in Mozambique

Pope Francis I doesn’t really seem like the kind of guy you’d catch rocking an aloha shirt, but apparently he’s as stoked as anyone, even as much as the Gudauskas brothers.

The Pope of the Catholic Church and the Popes of Stoke may appear a bit random, but the world works in mysterious ways.

Earlier this year, as part of their wildly successful surfboard drive, San Clemente-based brothers Dane, Pat and Tanner Gudauskas’ Positive Vibe Warrior Foundation delivered 700-plus surfboards to South Africa. They were distributed to a couple of aid organizations that work with disenfranchised children throughout Africa.

One of the groups they partnered with was a South African organization called Surfers Not Street Children (SNSC). Founded by an Englishman named Tom Hewitt, the program recently expanded operations into Mozambique. Working to not just provide surfing instruction, but more importantly counselling, schooling and mentorships along the coast of eastern Africa, this month SNSC launched the Tofo Surf Club. But they didn’t exactly do it alone.

Perhaps it was the help of divine intervention that Pope Francis got wind of what Hewitt and company have been up to and wanted to lend his mighty support. Apparently, one of the Pope’s advisers had seen Kelly Slater in the surf film Continuance 2. While nursing a broken foot at J-Bay, Slater, a supporter of SNSC, testified to the remarkable work they do in getting kids off the street in South Africa and providing their lives with direction.

After hearing about the project and seeing its profound effect, the Pope was elated, as Dane might say. Through his foundation, Scholas Occurrentes, the Vatican was able to link up with SNSC and support their initiatives in Mozambique.

“Pope Francis is known for his love of social justice but also loves the idea of surfing!” reads the SNSC Instagram post.

This week, the Tofo Surf Club celebrated its grand opening, and Pope Francis beamed in live from Rome.

“He basically chatted about what we are doing, and he gave a blessing over the live link up,” said Hewitt. “It’s not your usual surf story.”

The boards for the Tofo Surf Club were provided by the Positive Vibe Warrior (PVW) surfboard drive that the Gudauskas brothers supplied to SNSC. It’s remarkable to consider that all the boards that were pulled out of the back of garages and rafters have traveled halfway around the world and are not only enjoying a second life via a stoked kid in Mozambique or South Africa, but they have also captured the imagination and blessings of the Pope.

“Check the PVW board and sticker in the middle of it all!” laughed Hewitt.

“Are you kidding me? That’s the sickest thing of all time,” agreed his brother Pat, who was home for a brief 24 hours between a flight home from Brazil and another out to Indonesia for the next leg of the WSL Championship Tour.

To each their own when it comes to faith. What’s undeniable is the fact that the miracle of wave riding has touched the highest seat in a major worldwide religion—all because a few surfers from Orange County did their part and paid it forward. It just shows to go that even the littlest ripple can turn into a massive set of waves if the energy’s moving in the right direction.