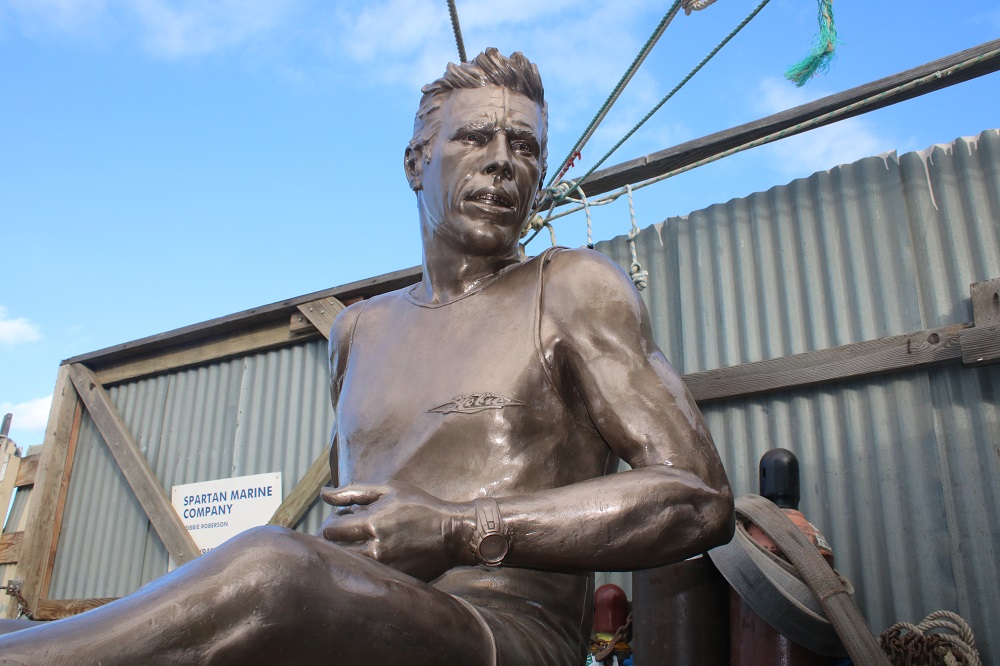 The awaited completion of the Hobie Memorial is nearing, as city officials expect it to be placed at its location near Doheny State Beach for the public to enjoy in early December.

“I distinctly remember seeing Hobie coming over (to my house) on a weekday—which was unusual for him—with shorts on, flip flops, a pencil behind his ear and a clipboard,” said Wayne Schafer, a longtime friend and owner of the beachfront property where the concept of the Hobie Cat was first developed. “He told me he was going invent a new kind of catamaran.”

The design took sailing, a sport that had been too difficult or expensive in the past, and made it more welcoming for people to try. As the popularity for the Hobie 14 expanded beyond Dana Point, the need for production increased, ultimately leading to the creation of the Hobie Cat Company. Schafer went on to travel all over the world on behalf of Hobie to lead workshops and tutorials on operating the catamaran.

In his lifetime, Alter became a charter member of the Sailing Hall of Fame and was inducted in the Catamaran Sailor Magazine’s National Hall of Fame and the Huntington Beach Surfing Walk of Fame; he also received the Waterman Lifetime Achievement Award. He passed away in Palm Desert on March 29, 2014 at the age of 80.

Upon his passing, friends close to Alter had the idea to erect a monument in his honor, recognizing his contribution to the area and to the surf industry. Robbie Roberson, president of the memorial’s board of directors, had worked for Hobie and partnered with Bruce Beal, an attorney and member of the Dana Point Historical Society. The idea gained momentum after being pitched to city officials and local civic groups.

The Hobie Memorial Foundation formed with a goal to create a landmark featuring Alter. Its mission statement claimed Alter’s legacy is a large part of the cultural and industrial history of Dana Point through his innovations in surfing, boating and skateboarding.

“Hobie demonstrated initiative and leadership at a time where surfing was frowned upon. If you were a surfer, you were looked down upon,” said Henry Ford, a friend of Alter’s and an organizer with the foundation. “Today, surfing is much more acceptable. We need to acknowledge Hobie’s achievements for what they were in his lifetime.”

After scouting different locations, the foundation agreed to have it located near Doheny State Beach, at the new linear park adjacent to the South Cove development at 34202 Del Obispo Street. The statue, a bronze creation designed by local artist Lance Jost, will be the anchor piece of a series of statues of local legendary watermen, sculpted by local artist Bill Limebrook.

The statue is part of a collaboration between the City of Dana Point and Zephyr, the developer of South Cove.

“Zephyr is proud to partner with the City of Dana Point to bring this park to life,” said Chris Beucler, Zephyr’s Chief Operating Officer. “We value our relationship with the community and are excited to be a part of the unveiling of the Hobie Memorial, the first of many surfing monuments in the park, creating a space to honor the deep surf culture in Dana Point to be enjoyed by all for years to come.”

Zephyr is developing the land as part of the South Cove beach community development adjacent to the park; eventually, the park will be fully owned and managed by the city, a spokesperson for Zephyr said.

“Dana Point is home to many legendary watermen, but Hobie Alter is certainly one of the most noteworthy and has a tight bond to Dana Point,” said Dana Point City Manager Mark Denny. “The City Council recognized this and the importance of partnering with the Hobie Memorial Foundation to celebrate his legacy.”

Upon completion of the memorial in Dana Point, the foundation will continue to work to keep Hobie’s legacy and influence alive through scholarships and active community engagement.

“Hobie had a tremendous influence on the culture of this city and ocean sports,” Denny said.  “Hobie was regarded as a man with exceptional character who embodied ingenuity and hard work.  It’s those qualities we celebrate with his family, friends, employees and those who knew him, and it’s those values we want to share with future generations and the community.”

The Hobie statue comes soon after the return of the Larry “Flame” Moore monument rock was returned to Salt Creek with official recognition from county officials, after its initial placement was deemed illegal. Moore was a renowned surf photographer credited with enhancing the careers of professional surfers.

A new exhibit showcasing the life and work of Alter is now on display at the John Wayne Airport in Santa Ana. A collection of historic photos of Alter can be viewed in the Vi Smith Concourse Gallery, located on the departure level, across from gates 2 through 5 in terminal A; gates 18 through 21 in terminal C and in the free-standing display cases across from Gate 14.

The Hobie Memorial is expected to be available for public viewing in early December. For up to date information on its installation, visit www.danapointtimes.com.