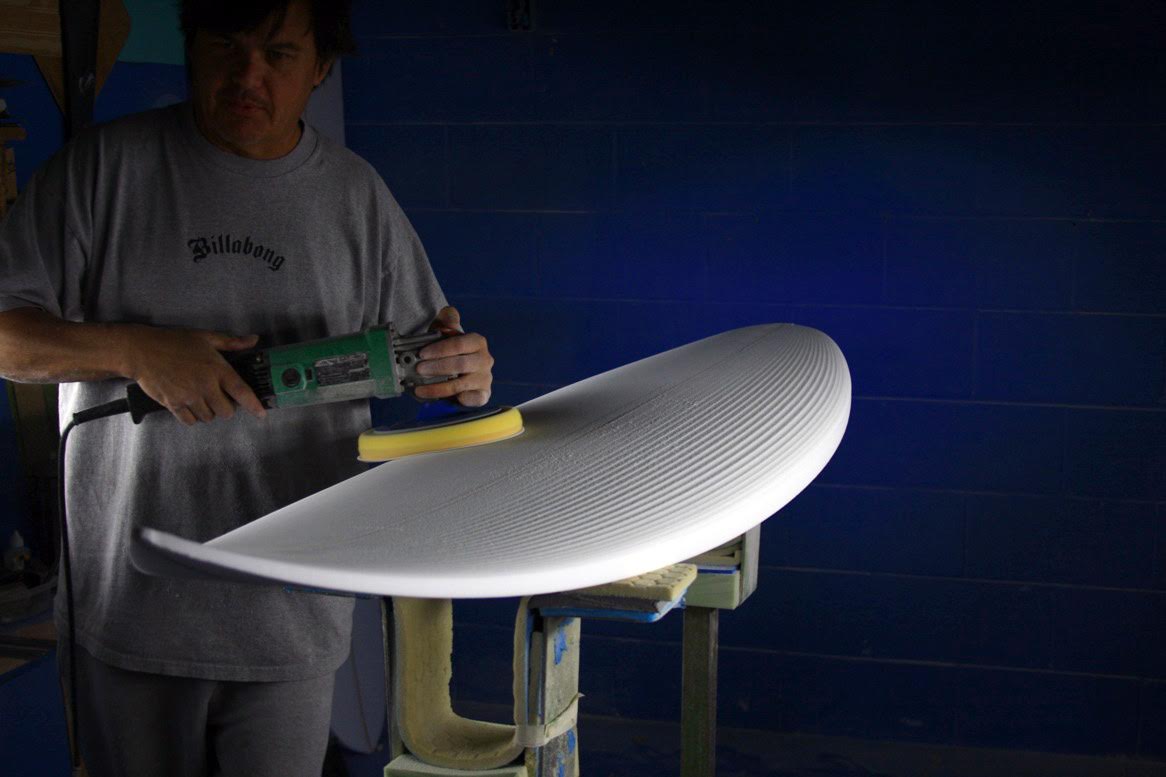 Point Of Origin: For Timmy Patterson, building surfboards is a family tradition

Surfboard building is a time-honored tradition in Dana Point and San Clemente. It’s one of the first areas in the United States where boards first were made when the sport jumped the pond from Hawaii.

Innovators and entrepreneurs like Gordon “Grubby” Clark and Hobie Alter were among the first to begin surfboard production on a more industrial scale.

Landing in Hobie’s shop in the early ’60s were a pair of brothers from Hawaii, Ron and Robert Patterson.

“Hobie opened up in ’61, I think. Robert called my dad and told him there were jobs up in Dana Point,” said shaper Timmy Patterson from his San Clemente surfboard factory. “He’d just had two kids and I was on the way, so he moved up Dana Point to work. I grew up in a surfboard factory, just as my kids have too.”

But the Patterson family history actually reaches back farther than that, back to Waikiki during World War II.

“Walter Hoffman sat me down one day and said, ‘You remember your grandpa? Well, he used to make me blanks out of the lifeboats from Pearl Harbor. They were made out of balsa wood and he’d skin them and build blanks out of them. We’d shape them in a woodshop in Waikiki and sell them so we could stay there.’ That would have been in the ‘40s,” Patterson said.

From sweeping the shop floor as a grom to learning to fix dings, foil fins and hot coat as a youngster, Patterson applied himself to learning every step of the board building process. He recalls shaping his first board around 1977. Today, he makes some of the most high-performance surfboards in the world.

“To be able to surf better has always been the goal,” explained Patterson of his shaping philosophy. “I’ve always been into wedgy little beach breaks, and just to be able to get up and down on them, to have that speed all the time and fit in the pocket and turn anywhere you want on a wave—it’s kind of a constant evolution. Making high-performance surfboards is kind of my thing. I’ll have some customers come in and they’ll want a specific board, and I’ll be like, ‘Nah.’”

Timmy Patterson Surfboards consists of a small retail space on El Camino Real in San Clemente with a shaping facility and glass shop below in the notorious Surf Ghetto.

“The Surf Ghetto has changed a lot,” Patterson lamented. “The workforce has dwindled. Some of it is production overseas, but at the same time, I don’t see kids come walking in here saying they want to learn how to make surfboards. They want to learn how to shape. They don’t want to learn to clean the shop, and that’s the first thing. When I started working I was stoked just to sweep the halls and clean-up. That was your in to a shop. Now it’s like, ‘I want front row…gimme, gimme, gimme…help me design it and then I’ll cut it and shape it.’ I did everything from making fins, sanding, glassing and shaping.”

Patterson’s always been a dedicated hand-shaper, priding himself on his eye and techniques, but in the last year he’s also added a computer shaping machine to his arsenal.

“It’s cool to be able to design with the programs these days because, coming from full production shaping, to be able to relate it into a program is incredible,” he said. “You can copy things pretty much dead on, and its like, ‘Wow, I’m getting a hand-shaped feel out of a computer.’”

At the moment, business is good and Patterson is keeping up with the steady demand for his boards. “I can’t just drop off 20 boards at a shop,” he said. “I can’t put that money out. If I’ve got 20 boards, they’re going into my shop. There is a point where things start to get out-of-hand. I think it’s about 70 boards a week where things start to become a nightmare. At about 40 boards a week everything’s manageable.

“I’ve got my own glass shop, and if I want to design a board and I want it now I don’t have to wait that long,” Patterson continued, throwing a board under his arm and his sandals on his feet. “I can shape a board and it’s ready to ride the next morning, or I can even shape it, glass it and have it in the water by the evening…and I do that with a lot of my riders. It’s cool because I get instant feedback. I don’t have to send it out to a cut house and wait a couple weeks then wait a couple more weeks while it’s in the glass shop. That idea is gone. I can have an idea right now, make it and ride it.”

And like that, Patterson closes the door to his shop, climbs in his van and heads to the beach. With his quota of boards done for the day, it’s time to surf.