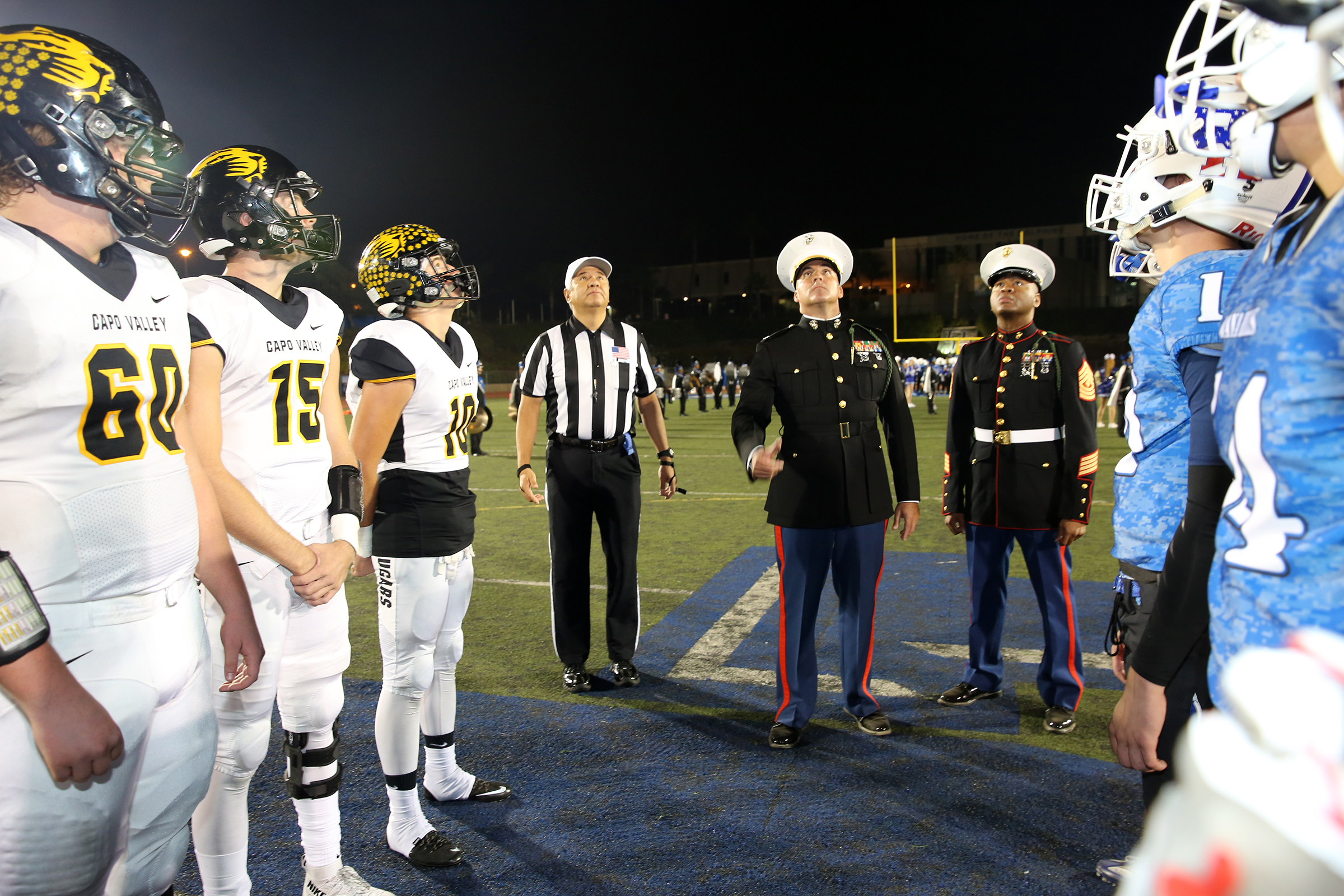 There is a certain honor and respect that comes with playing for a name other than your own.

Senior guard for the Dana Hills High School football team, Christion Pouchie, and the rest of his teammates were asked to do that very thing in the fifth annual Honor the Valor military appreciation football game on Nov. 4.

Each of the Dana Hills players were assigned to a local combat veteran, and took the field against Capistrano Valley wearing their veteran’s name—instead of their own—emblazoned on their back as a show of respect.

In Pouchie’s case, the name he wore on his back that night hit a little closer to home.

“My grandfather, Hector Clark, is the Marine I was assigned, and I was excited to play for him because not only do I respect him, but this would be the first game he has watched me play,” Pouchie said.

Pouchie got the rare honor of representing his grandfather on the gridiron, and 64 other combat veterans were given a similar honor. Following the game, the Dolphins players lined the field to present the veterans in attendance with their game-worn jerseys. A color guard and active-duty military personnel were on hand for pre-game ceremonies.

Pouchie’s commitment to honoring his grandfather and his country will continue even after the final whistle sounded. Earlier this year, Pouchie enlisted into the United States Marines Corps.

The entire Dolphins program was impacted by the Honor the Valor event, especially senior wide receiver and captain Ryder Lynch.

“We could never pay these men back for the sacrifices they made. This is only a small way that allowed us to show how thankful we are,” Lynch said. “I’m thankful for their services and their ability to put their lives on the line for people they’ve never met.”

The Honor the Valor game takes months of planning between the Dolphins’ staff and boosters and local veteran organizations. Dana Hills head coach Phil Skinner encouraged each of his players to write a letter to their particular veteran before the game in order to build a relationship.

“They wrote to the veterans about what freedom meant to them,” Skinner said. “I wanted them to explain what the sacrifices these men made enabled them to do.”

On game day, 65 veterans made their way to the Dana Hills football field to watch the Dolphins take on Capistrano Valley in the final game of the regular season. Although the Dolphins lost, 64-19, the game was all about appreciating what the veterans had done. Prior to the game, the players sat down for dinner with their assigned veterans to not only share a meal, but to share experiences.

In its first four years, the Honor the Valor game has raised over $75,000 for veteran organizations. Proceeds raised at this year’s event went toward the Dana Point 5th Marines Regiment Support Group and the Veterans of Foreign Wars Post 9934 of Dana Point.

“I wish more schools would adopt this tradition. It’s important to show our thanks to veterans year-round, not just on Veterans Day,” Skinner said.