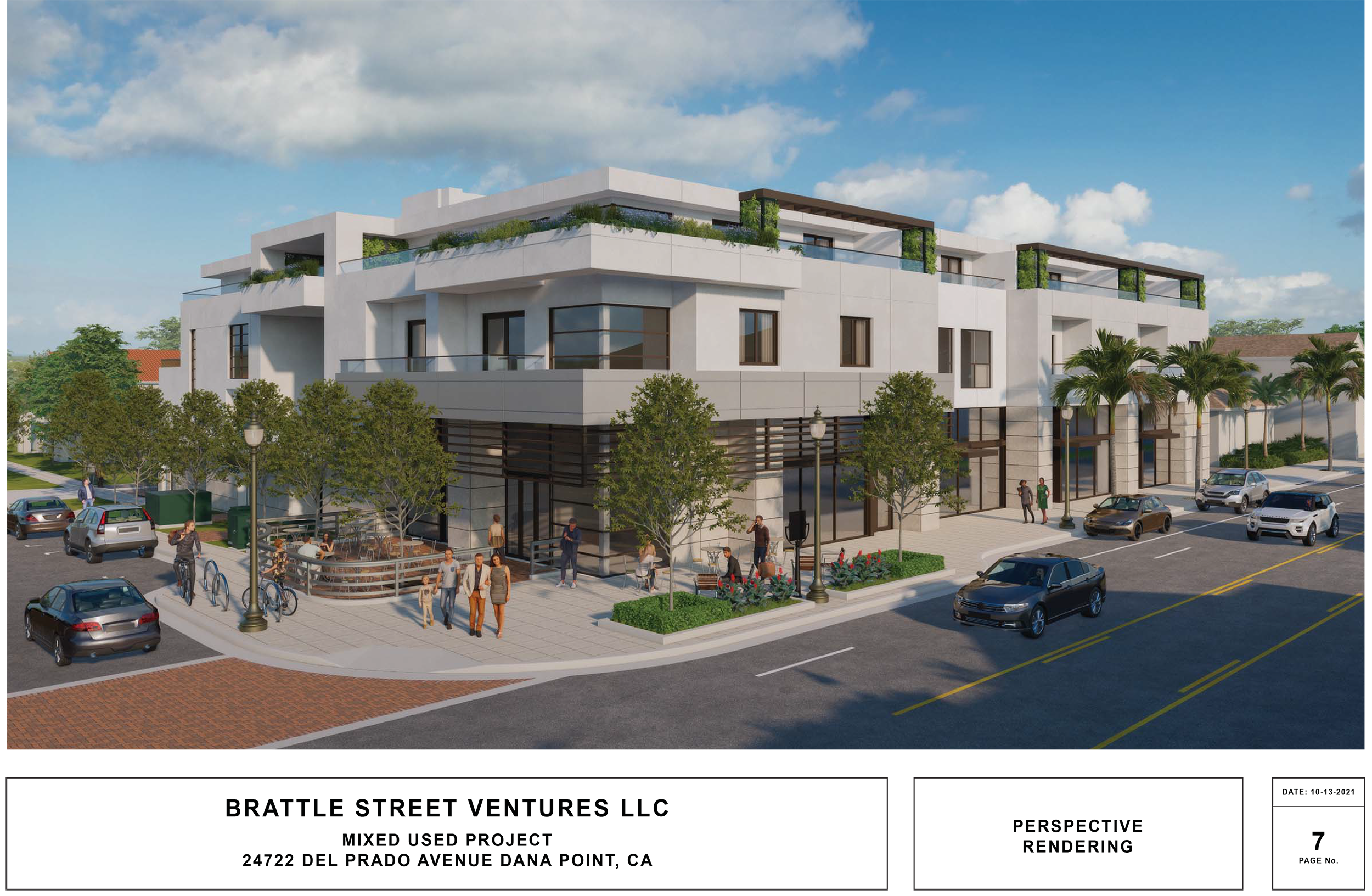 Featured Image: The mixed-use project, shown in the rendering, will consist of 18 condominiums, two store spaces, a retail suite, and a restaurant. Photo:  Courtesy of Brattle Street Ventures LLC

The Dana Point Planning Commission voted unanimously during its March 28 meeting to approve entitlement permits for the new mixed-use structure to be built on the corner of Del Prado and Old Golden Lantern. Commissioner Ashok Dhingra was absent during Monday’s meeting.

The planned project comprises 18 condominiums, two spaces, potentially for an art gallery or furniture store, a retail suite, and a restaurant. Of the 18 condominiums, four will be one-bedroom and 14 will be two-bedrooms.

The project is approved for multi-family units. While it is too soon to estimate the price the condominiums will be sold at, the developer noted that the condos are large residences with unobstructed ocean views, amenities, quality construction, and many other features.

“The project is totally consistent with our Town Center plan, is compatible with adjacent neighbor uses, conforms to our zoning and our local coastal plan, absolutely visually enhancing our community,” Planning Commission Chair Eric Nelson said.

A variance permit was required as the building plans have the ground-to-floor height on the ground floor 18 inches shorter than the required 18-foot height. However, with the variance, the total building height remains below the maximum 40 feet at 39 feet and 11 inches.

The Brattle Street plans also include an outdoor patio at the site of the restaurant. Theel explained that because the corner of the east side of the building faces the rising sun, “we felt that it would be really advantageous to put a restaurant there with the idea of having morning uses working into the mid-day, taking advantage of the sun coming up, having an outdoor space that’s adjacent to the restaurant space.”

Dana Point resident Wit Muller noted that the project reminded him of the recent Prado West development by Raintree Partners.

“We’re always skeptical about something new and looking at this picture, all I need to do is look at this picture and think, ‘yeah, I’d like to see those buildings all over Dana Point,’” Muller said.

Dana Point resident Patrick Prendiville bought a building across the street from the proposed site back in 2013 and hopes that the development will bring more foot traffic to the area.

“When I bought the building, I was told about the Town Center concept and I was really excited about it,” Prendiville said. “You guys have done a great job with it, I really like how it’s developed. What I think is important about this project, and I’m fully supportive, is the fact that our block needs a shot of adrenaline to get others to do the same thing.”

A resident who lives in a house adjacent to the planned project fears that the restaurant aspect will bring noise to the area, noting that she’s experienced that with Stillwater Spirits and Sounds.

Planning Commission Vice Chair Roy Dohner added that residents of the condominiums living above the restaurant on site would likely have a major influence on how much noise will be acceptable and doesn’t expect the restaurant to pose a major issue as far as sound.

Nelson echoed Dohner’s point adding that the city has rules in place to address excessive noise.

“It’s a gorgeous building, one I’ll be very proud to have my small fingerprints on,” Nelson said. “It really, not only ends the Town Center on Del Prado as it goes towards Golden Lantern, but hopefully it will be welcoming and will actually get people to turn right instead of going straight down to the harbor, which will be good for businesses along Del Prado there.”

“This site is absolutely suitable for this form of development, everything is on site including the parking, which is unique and appropriate,” he continued.

Brattle Street will now begin the process of going through construction drawings, which Theel explained typically takes six to eight months. Once the mixed-use project has obtained all necessary permits, Theel estimated that construction will take 20 months to complete.