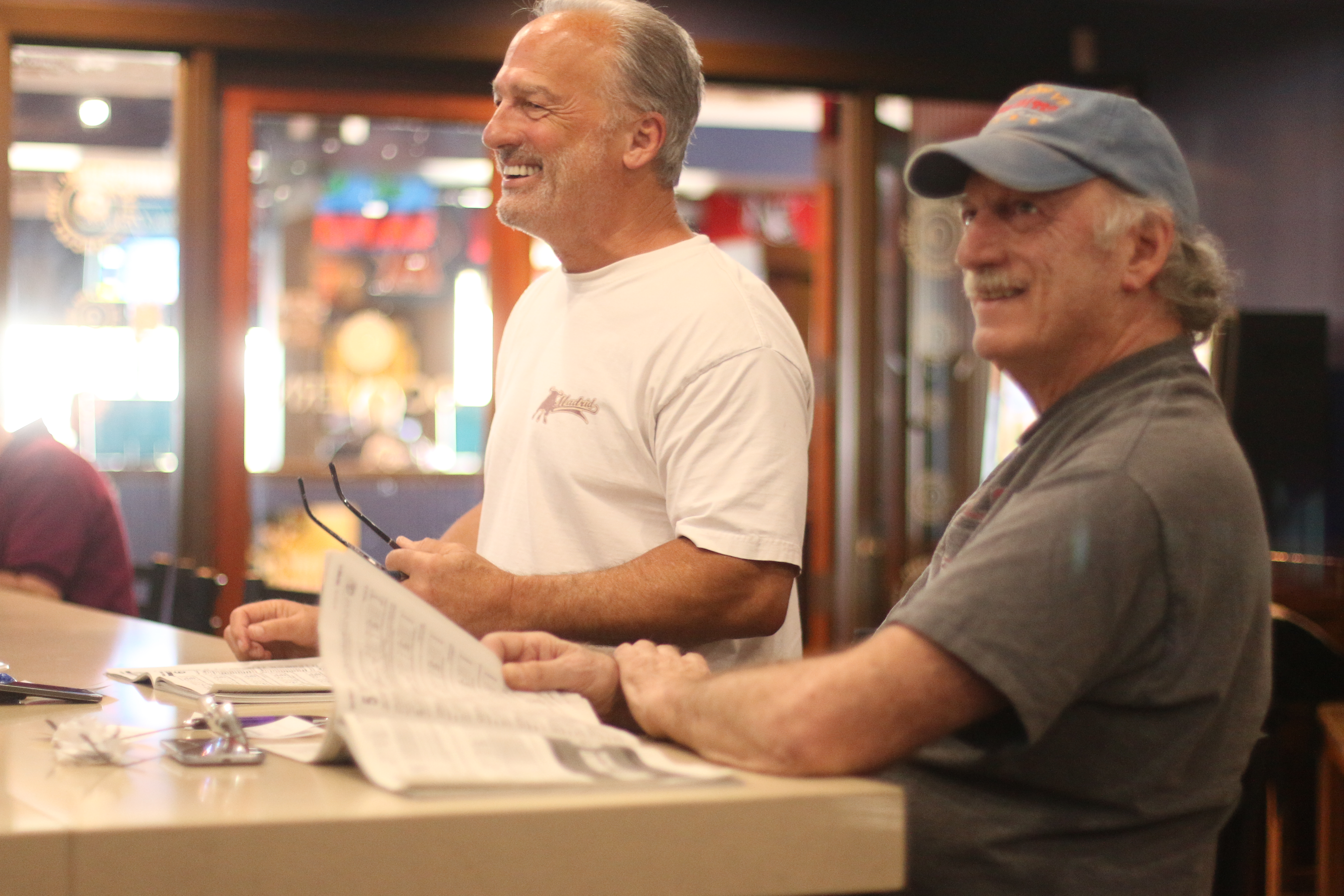 It’s 3:29 p.m. on a hot Thursday afternoon and the off-track horse betting room inside OC Tavern Grill and Sports Bar is buzzing with excitement.

Race 5 at the Del Mar Racetrack is about to start, and there is a large amount of money riding on the outcome in this room that is covered wall-to-wall in high definition TVs.

“This race is wide open. Any one of these horses can win,” a lady at a nearby table says out loud to no one in particular behind a stack of betting forms.

“Any one of these dogs could win,” a man sitting at the bar blurts out.

I came to OC Tavern wanting to get a feel for what the popular San Clemente restaurant’s off-track betting site was like. I was a product of the poker craze of the mid-2000s, so I’m no stranger to low-stakes gambling. When it comes to horse betting, however, I’m a pure novice.

But I like winning, and the lure of betting on two different horses with longshot odds (Mac McLovin and Lucky Pegasus) on this particular Thursday was too strong to ignore. I wasn’t going to waste my hard-earned $2 bet on the overwhelming favorite. I was rooting for an upset and a nice payout.

As the horses in Race 5 thundered their way down the track and the tension, and volume, in the room grew louder, I started to think about what OC Tavern owner Michael Merrigan told me just 30 minutes earlier. Sure, you can earn $20 any day and be satisfied. But winning $20 is a different feeling entirely.

Merrigan, 52, knows what it feels like to have a longshot bet pay off big.

Back in 2010, OC Tavern Grill & Sports Bar in San Clemente needed to find more customers during the day. The local restaurant was doing well on nights and weekends, but was in trouble financially due to a lack of foot traffic at lunchtime.

California was in the process of passing legislation that would allow restaurants and bars to open off-track betting sites, which in turn would boost the horse-racing industry. Merrigan thought it could be a benefit both to his business and to the community of horse-racing fans in Southern California.

Merrigan wanted to bring off-track betting to OC Tavern, but he had his doubts. The cost to get the operation off the ground was considerable. He knew in order for it to work, he would have to change the way his San Clemente clientele viewed gambling establishments by offering a fun, clean environment.

Plus, no other sports bar in the state had offered this before. With no proof of concept to rely on, he would be entering uncharted waters.

“Am I doing the right thing?” Merrigan remembers asking himself.

While he was weighing the pros and cons of his decision, Merrigan serendipitously went to the movies to see the newly released film Secretariat. The film’s true-story plot revolves around a historic, record-breaking horse and an owner who refused to quit on him.

Merrigan drew inspiration from the character of Penny Chenery (played by Diane Lane), who owned the Triple Crown-winning horse. Chenery’s detractors in the movie were saying her horse had no shot. But the confidence she had in the horse, and in herself, eventually won out.

“Everyone was telling (Cherney) to give up on the horse. But she believed in it. She never gave up and that’s the same thing that happened here,” Merrigan said. “I went with a gut feeling and said, ‘This is going to be good’. I knew I had to go for it.”

After a 16-month accreditation process, OC Tavern became the first sports bar in California to offer off-track betting in 2010.

Seven years later, Merrigan is sitting in his restaurant smiling and reminiscing about his decision.

“It saved the business,” Merrigan said of the facility’s instant success. “It makes us stand out and it really completed our sports bar theme.”

The off-track betting facility at OC Tavern is open every Wednesday through Sunday, broadcasting live feeds from tracks across the country. There are clerks on-site, employed by the state, to assist and take bets.  Several automated betting machines that look like ATMs line the walls.

It may seem intimidating at first, but Merrigan and his staff ensured me that betting was simple once you learn the lingo.

After I fumbled my way through placing my first bet I grabbed a seat near the bar, where I met San Clemente residents and father-son duo Fred and Gabriel Richardson. Whenever his wife goes out of town to visit relatives, Fred takes Gabriel to the OC Tavern to enjoy a beer and make a few wagers.

A man who called himself Bill noticed me struggling with the betting lingo at the counter and saddled up next to me to offer an unsolicited crash-course in Horse Betting 101.

Bill told me about pick-four and pick-six betting strategies, which is a way to maximize profit with little risk by picking winners in multiple races. He pulled dozens of busted betting slips out of his pocket to show me how he nearly turned $2 into $45 earlier in the day. I know what betting on a horse to win, place (second or better) or show (finish in the top-3) means, but Bill was operating on a higher plane of gambling existence.

Listening to Bill’s advice, I began to understand how horse betting is an art form. It takes skill to come out with more money than you came in with. By hedging multiple bets throughout the day, you can theoretically improve your odds, which gives the gambler a fighting chance. This strategy takes a deep understanding of the different kinds of bets, coupled with the skill of identifying choice horses across the board.

I thanked Bill for his words of wisdom right as the ponies jolted out Del Mar’s starting gate in Race 5.

The opening minute of the race was glorious. My horses were running in the second and third spot the whole way. But as they made the final turn, both of them faded fast. The odds-on favorite did what was expected and won by a length.

There was a photo finish for third place between my longshot pick and a horse named Fake News. After a lengthy review, my horse finished out of the money behind that bit of irony.

I lost, but it was hard to shake the feeling of excitement that just washed over the place.

Those of us in that room were taking part in what makes watching live sports great. Some wanted one outcome, others wanted another. All of us had our own unique reasons why: money, the adrenaline rush, the satisfaction of picking a winner.

The beauty of it all was the fact another race was starting at Santa Anita Park in just five minutes. I immediately started thinking about my next bet and reliving the excitement all over again.

Merrigan was right, I thought to myself. The prospect of winning my money was a different feeling entirely.