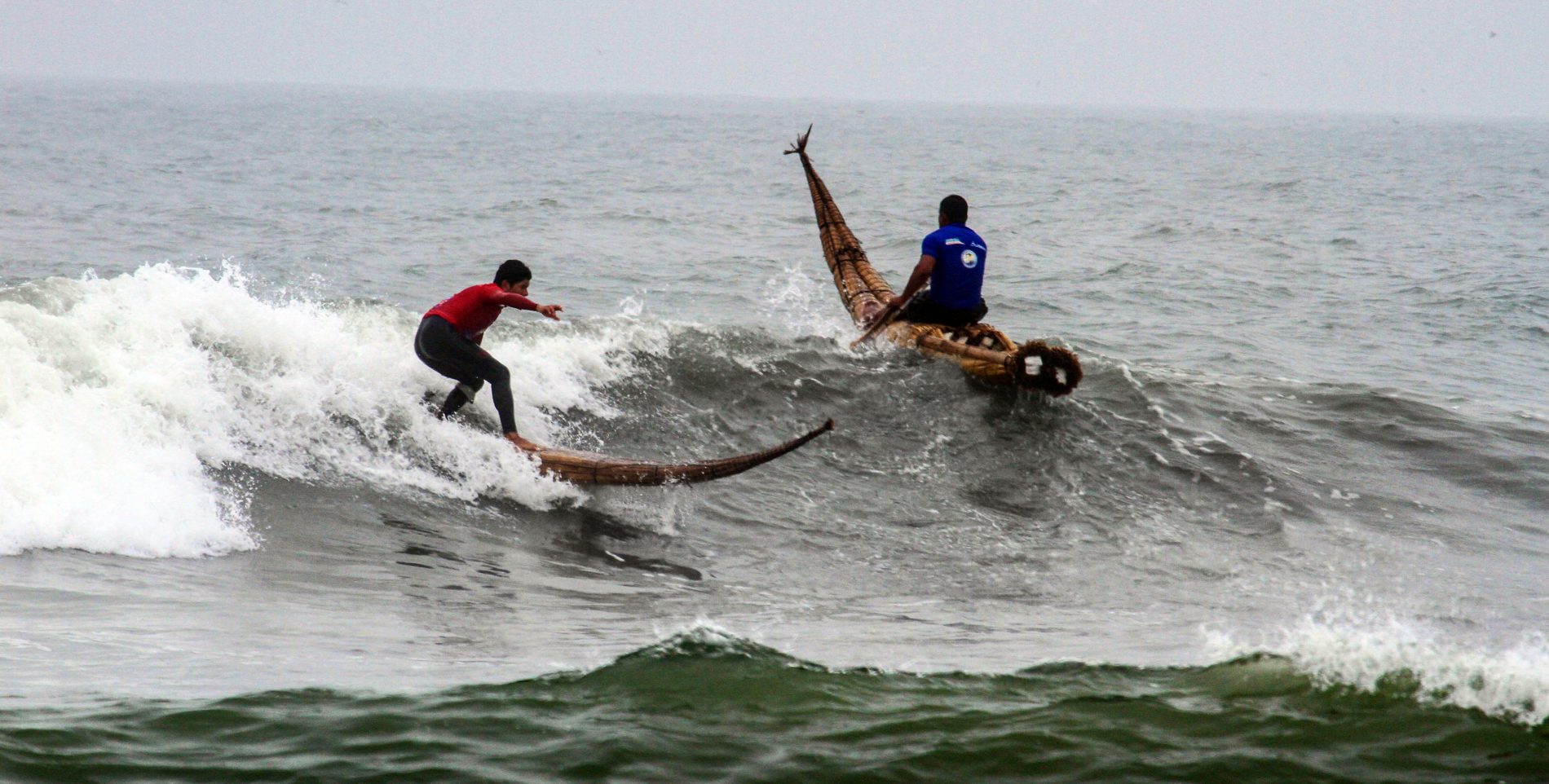 Peru Not Polynesia?: Rethinking the heritage of surfing and its culture

Food for thought, as we celebrate Independence Day and all of the nostalgia and heritage it invokes, South Orange County is considered by surf historians to be the birthplace of the surf industry. Grubby Clark, Hobie Alter, Dale Velzy, Bruce Brown, the list of luminaries from the 1950s and 1960s runs long. Reason enough to celebrate, but those gents wouldn’t be the legends that they are without their Hawaiian forefathers, who conceivably “invented” surfing.

But maybe they didn’t. Maybe surfing is more South American than Polynesian? Last year, I had the opportunity to edit a new book on the history of surfing. Not your typical yarn about the islands, the Duke and all the Polynesian flattery, the book, titled 5,000 Years of Waves: A History of Surfing in Peru, details the 5,000-year history of wave riding dating to pre-Inca cultures. The contention is that surfing in Peru predates surfing in Polynesia by hundreds, if not thousands of years. Based on archeological records, Peruvian fishermen began riding reed crafts called “tups” or “caballito de totora” around 800-600 B.C. Some of the earliest records of “he`e nalu,” or wave sliding, in Hawaii is traced back to the 15th century A.D.

“Traditionally, the origin of surfing is attributed to former members of Hawaiian royalty, who surfed on wooden boards they built themselves with native materials they found on the islands. Therefore, the art of surfing is recognized as the “sport of kings,” and most of its modern history, often based on studies done at the Bishop Museum in Hawaii, tends to establish its origins in the blue waters of Oahu and the surrounding islands,” writes author Roberto Meza. “However, for several decades, developments in the field of pre-Columbian archeology have revolutionized the traditional theory of the origin of the art of surfing. By studying the cultures of the coast of Peru, as highly developed as the ancient Egyptian civilizations, evidence proves that these men developed surfing thousands of years ago. Such is the case of the recent discovery of the ruins of Caral, which dates back five thousand years ago.”

Meza details how two ancient Peruvian cultures, the Mochica and Chimu, could be where surfing actually began. Iconography in archeological remains found in the Huaca Cao Viejo in the El Brujo complex show endless sequences of waves. Archeologists believe the waves represented the movement, strength and power of the sea as a source of life. The economic and social development of the Mochica and Chimu cultures was linked to fishing: they turned the Pacific Ocean into one of the largest fisheries in the world. They devised their own styles of art, social organization and construction of large cities and pyramidal complexes. During that time, fish was the main source of protein in the diet of an estimated one hundred thousand inhabitants of the city of Chan Chan.

“The Mochica and Chimu cultures faced the challenge of living alongside a powerful coastline, exposing them most of the year to larger swells. Just imagine the endless sets of waves at a place like Chicama—a fishing and surf town in Northern Peru,” writes Meza. “One of the best waves in the surfing world, it is located south of the excavations of Lambayeque, where one of the most lavish and rich tombs of the Americas and the Lord of Sipán, was discovered a few years ago. The first men who experienced the pleasure of surfing were fishermen who had to face the power of waves in order to get their food. The necessary courage resulted in a rite of passage, similar to other warrior rituals or traditions found throughout history.”

Over time, Peruvian sailors found their way to the islands of Rapa Nui (also known as Easter Island). From there the early settlers of Rapa Nui were able to make forays into Polynesia and, allegedly, spread the concept of riding waves.

“Once the fisherman had experienced the delights of surfing, he’d dip into the sea from time to time for the pure and simple pleasure of catching a few good waves,” contends Meza. “It is undeniable that the most skilled fishermen felt proud of their abilities and strength to face the sea. Culturally, their skills immediately placed them in the select social group of expert fishermen. It should not surprise us to learn that contests and competitions were held to see who the best fishermen challenging the sea were. Paddling and crossing over foam, they rode waves in ritual and competitive events, similar to the ancient Greek Olympics.”