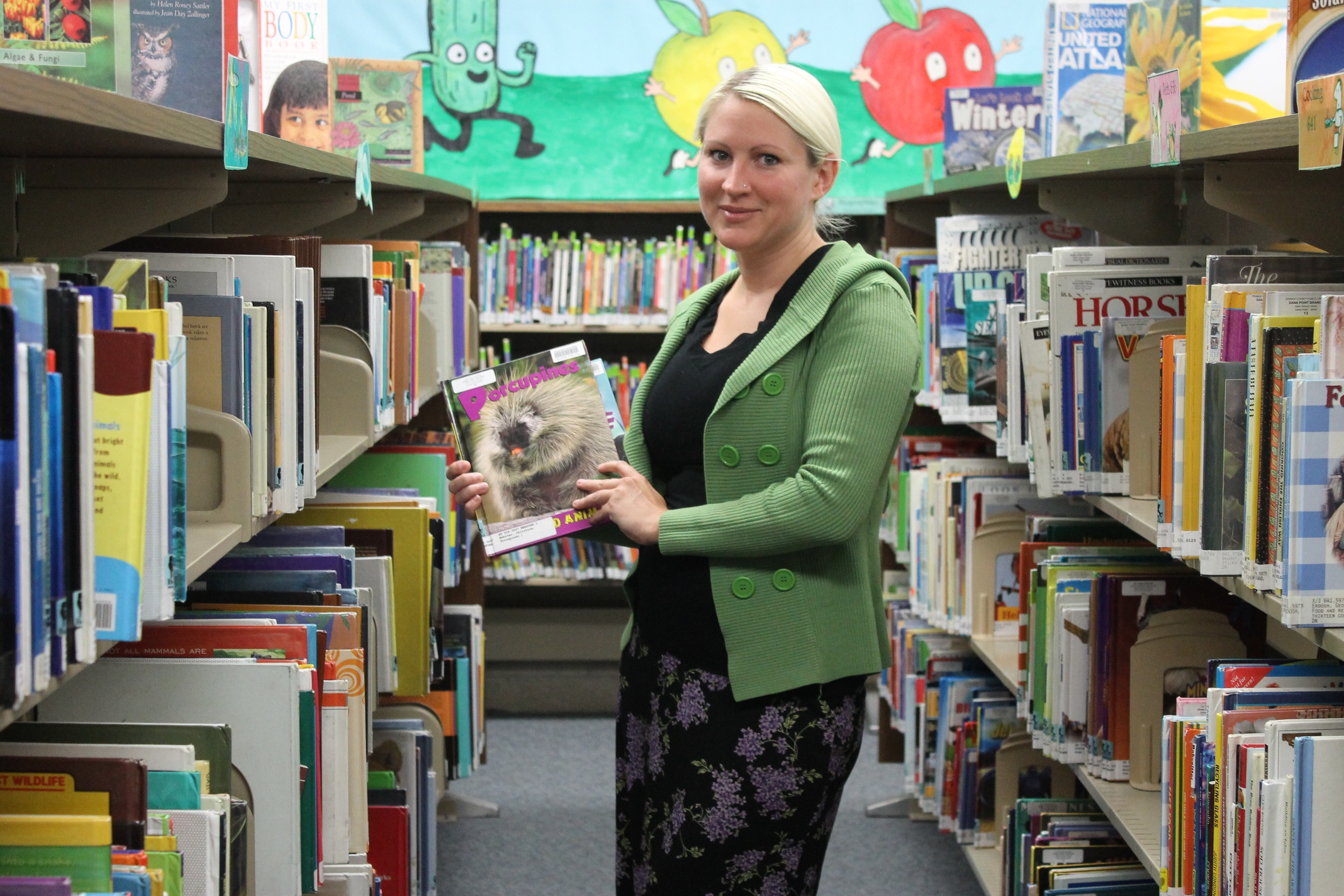 Penning a New Chapter for the Dana Point Library

Shaking things up at an aging library is no simple task but that is exactly what Dana Point’s three newest librarians are trying to do. It’s out with the old and in with the new.

Over the last 18 months, the Dana Point Library has seen a changing of the guard in the form of new hires for its children, teen and adult librarian roles, each bringing their own approach to the system, insight and visions for taking the county’s local resource to the next level.

“The staff is making every effort to fit into the community to see what the community needs and wants, and part of that is great service,” said Orange County Librarian Helen Fried. “Sometimes you need fresh eyes, and with new people there is still that vitality of bringing in something new.”

When head librarian Susan Piña came to the local branch in February she entered a near 40-year-old facility in stark contrast to Irvine’s ranch-situated Katie Wheeler Library, which she helped open in 2008. But with the over-the-hill library, situated near Dana Point’s center, Piña inherited a dedicated core of staff and volunteers that have the community’s best interests in mind, she said.

Piña’s first few months at the Dana Point branch were centered on addressing immediate facility and collection needs. Her transition also involved a meet-and-greet of sorts with her staff and community, something she pegged as an integral part of her—and their—adaptation to change.

“People love their library,” Piña said. “I get really great insights from them and they are always sharing with me what their vision is for the library.”

Piña comes to Dana Point after being at the Wheeler branch for four years and with the Orange County Public Library system for a total of seven, with most of her tenure spent as a teen librarian.

Seeing an immediate need to integrate local teens, Piña and her staff began a Teen Advisory Board giving youth in the community a voice when it comes to library programming.

In the board’s short existence, they have already helped bring summer classes to augment learning over the break, an SAT preparation course and events highlighting their interests in video games and graphic novels.

“It is really rewarding working with teens,” Piña said. “They are just fun and energetic and their perspectives are so fresh. They are really just a great group.”

It is that fresh take on library activities and offerings that Piña, and fellow relatively new-to-the-area librarians Christopher Wright and Ericka Reeb, hope to see throughout.There was a lot of cleaning up and getting to know one another initially, but now the library’s leaders are catching their stride and falling into working with one another to bring new improvements to the branch.

Taking the reins from a local legend

Ericka Reeb started working at a library in Irvine right out of high school, and from UC Irvine where she majored in psychology and social behavior to her library sciences studies at San Jose State University, she has focused on engaging young readers.

Reeb entered the Dana Point library last November, nearly one year after longtime children’s librarian Carolyn Hopkins retired. Hopkins, who had worked in the county’s libraries for nearly 40 years, left in March 2012, but her position went unfilled for months.

With Piña at her side, Reeb hit the ground running to put on the library’s summer reading programs for teens, elementary school children and preschoolers.Their biggest obstacle, filling in gaps of high-profile series and purchasing of materials, left void without a children’s specialist. Summer programming came to an end just a few short weeks ago and Reeb said attendance of about 600 kids and 200 teens was good, but not where it had been in years past.

“We are working our way back up,” Reeb said, “We are just trying to build up the collection for them.”

And with a $10,000 donation from their “Friends” to purchase new youth materials, the librarians will be able to do just that.

It’s good to have friends

The Friends of the Dana Point Library, an all-volunteer group which supports the library’s efforts, have turned the last page of a contentious chapter in their history and are looking to the future to recapture, and reignite, their organization’s mission.

Started in 1979, the Dana Point branch of Friends have served the community and library through sales at their library located bookstore. After being shuttered for three months, due to ongoing litigation and turmoil between factions of the group, the Friends bookstore reopened in February.

“It is much more organized now,” said Friends volunteer Donna Huff. “It is one of those things where you get the right people in and things start running smoothly.”

With their troubles behind, the Friends hope to shine a fresh light on their bookstore and the library, both figuratively and literally, Piña said. Dedicated in 1976, the Dana Point Library is in need of structural repair, including discolored skylights that darken the library more than lighten.

Dana Point’s Friends have committed to raising funds to replace the old paned skylights, something Fried said they wouldn’t have done if they couldn’t make it happen. While no timeline has been set for their goal, Piña said once completed the changes will bring new life to the facility.

Did you know? September is library card sign-up month.

FRIDAY NIGHT AT THE MOVIES On the third Friday of each month, the Friends welcome guests to watch an international film and enjoy complimentary snacks in the community room. Shows start at 7 p.m. and no pre-registration is required. This month’s feature, on September 20 is a showing of Benjamín Ávila’s drama Clandestine Childhood (2011), a historical film centered on an exiled family’s return to Argentina in 1979. Due to the family’s political activities, they are relentlessly tracked and the threat of capture and death is imminent. Ávila’s film is one focused on militancy, undercover life and love.

READ TO A DOG One Saturday each month the library plays host to trained therapy dogs, who are great listeners, giving developing readers, ages 6 to 10, an attentive audience of man’s best friend. Upcoming events will be held at 11 a.m. on September 21, October 19, November 16 and December 7 in the children’s area. Sign up for a reading time at the library or by calling 949.469.5517.

BANNED BOOKS WEEK The library will participate in a nationwide event celebrating the freedom to read, or “freedom.” With various displays in bookstores and libraries across the country of frequently challenged books, the event highlights the value of free and open access to information and draws attention to the harm of censorship.

CELEBRATING THE CONSTITUTION The national government recognizes September 17 as Constitution Day, and this year marked the 226th anniversary of the document’s signing by delegates of the Constitutional Convention in Philadelphia, Pa. To celebrate the day, the Daughters of the American Revolution have arranged a historical display, being shown throughout the month.

PRESCHOOL AND TODDLER STORY TIMES Young readers ages 3 to 6 and their caregivers are invited to enjoy stories, songs and silliness with Miss Ericka, the children’s librarian each Tuesday at 10: 15 a.m. Miss Ericka then invites children 18-months to 3 years for a toddle story time at 11 a.m. with fun for all who come. No registration is required.

LECTURE SERIES Cultural anthropologist Stephen O’Neil presents a lecture on the native inhabitants of the Orange County landscape, the Acjachemen. The presentation begins at 7 p.m. on Wednesday, September 25 in the library’s community room.

TEEN ADVISORY BOARD On the last Sunday of each month, the Teen Advisory Board meets from 2 p.m. to 3 p.m. to discuss library programming and events. New members are always welcome, and volunteer hours are available for participation. The board has recently helped bring in new library programs like an SAT preparation course with Kaplan and different forms of media like comic books, graphic novels and video games.

ELEPHANT PARADE DISPLAY Now through the first week in November, three elephants visiting Dana Point with the international Elephant Parade are calling the library home. The colorful miniature statues “Kingdom” and “Colori” and the 6-foot-tall “March On,” a collaboration of 40-plus artists, act as inspiration for visitors to create their own elephant. Stop by the coloring table to design one for the library’s walls or one for home.

GLUE AND GO COSTUMES Just in time for Halloween, Holly Cleeland, the author of Glue and Go Costumes for Kids: Super-Duper Designs with Everyday Materials, will present ways to turn everyday household items into creative holiday costumes. Holly has been featured on The View and the Rachael Ray Show, and will be giving away three costumes. This family program at 4 p.m. on Thursday, October 3 is for all ages. Sign up at the library or by calling 949.496.5517.

TEEN WRITERS BOOT CAMP The library hosts a three day, afterschool course will tips and tools to help young writers transform their ideas into polished, and published, pieces. Meadow Griffin, the author of the fantasy series Legends of Erin, will lead the classes, which begin on Tuesday, October 29 and go through Thursday, October 31 from 4 p.m. to 6 p.m. Sign up at the library or by calling 949.496.5517.