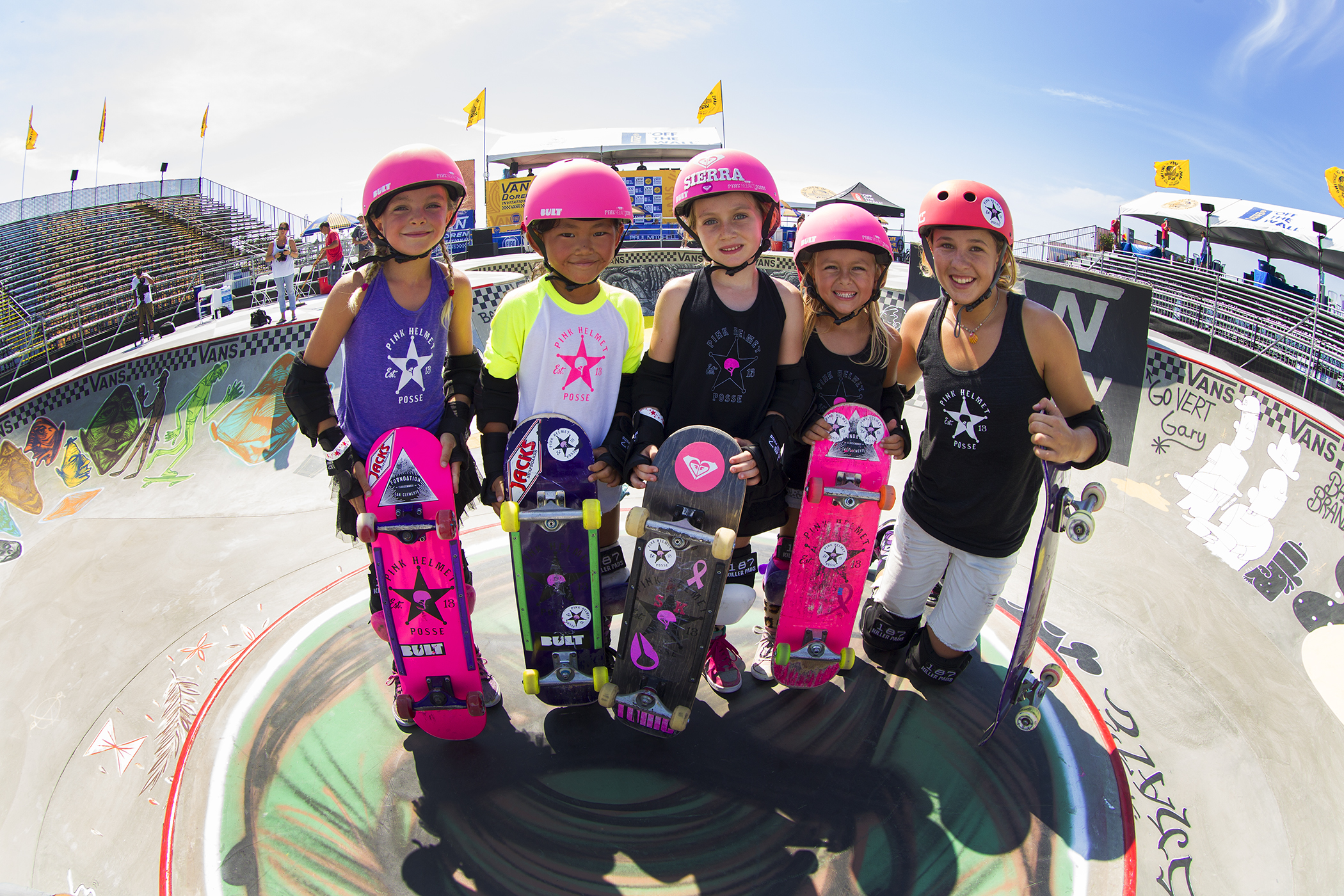 A group of young Southern California skateboarders have built a brand around their ability to thrash on rails and drop into large bowls.

With their pink helmets glimmering in the sun and their pink tutus flapping in the wind, it’s easy to spot members of the Pink Helmet Posse.

The Pink Helmet Posse is made up of five young girls, ranging in age from 6 to 15, all with a passion for skateboarding. Recently, the pink-wearing, skate-as-hard-as-the-boys boarders have been gaining national attention with online profiles from the New York Times and Sports Illustrated.

Since starting in 2013, the Pink Helmet Posse’s mission has been to spread the love of skating to girls. The movement has now become a brand including pink skateboarding gear like helmets, skateboards with their black and pink star logo on the bottom and Pink Helmet Posse clothing.

And while they may be young, these girls have been skateboarding for years.

“My dad would go skateboarding with my brothers and I wanted to try it too,” said Bellatreas Kenworthy, a 7-year-old from Dana Point, who goes by Bella. Fellow posse members Sierra Kerr, 7, and Relz Murphy, 7, also took up the sport to keep up with the boys in their families.

Since the beginning, these girls have been skating at a high level, causing heads to turn at skateparks throughout Orange and San Diego Counties. This level of skating comes from a simple love of the sport—it has little to do with the gender of the rider.

“It’s 2014, these stereotypes that have been put on girls have been going on for too long,” said Kenworthy’s dad, Jason, an action sports photographer. “They like to skateboard because it’s fun regardless of if they are a boy or a girl. Fun is fun.”

The group’s pink helmets and boards have become staples at the Alex Road Skatepark in Oceanside, the Magdelena Ecke Family YMCA Skatepark in Encinitas and etnies Skatepark of Lake Forest.

“I like hanging out with the boys at the skatepark because I get to skate with my brother and he and other boys teach me cool tricks,” said Murphy, who is also one to be reckoned with in the judo/jujitsu arena.

“It’s 2014, these stereotypes that have been put on girls have been going on for too long.”–Jason Kenworthy

Fifteen-year-old Jordyn Barratt from Encinitas is the oldest member in the group and its de facto older sister. Like the posse, she’s also been gaining recognition by competing in skateboard tournaments all across Southern California.

On Tuesday, July 29 she was one of three female amateurs competing in the Vans Skateboard tournament at the U.S Open of Surfing in Huntington Beach. She finished tenth out of the 30-competitor field.

“There usually are not a lot of tournaments but the one at the U.S. Open is by far my favorite because it is a big event and just a lot of fun,” Barratt said.

While posse members seem older than their young age, they still share fears with children their age.

“When I skateboard I get scared of the mega ramp because you get a lot of air and you can fall really bad,” said Kerr, a 7-year-old from San Diego and daughter of professional surfer Josh Kerr.

On Tuesday morning before Barratt headed to the competition course, the Pink Helmet Posse took to the skatepark at the U.S Open for a demonstration. Professional skateboarders and BMX bikers alike watched as the girls skated the same course the pros would be competing on later in the event.

And while this kind of exposure has led to a heavy amount of positive feedback and support from the skateboarding and surfing community, there has been some negative response as well.

Jason Kenworthy, a long time skater himself and father of four, said that the older part of the skateboarding community has not fully accepted the role the Pink Helmet Posse is playing.

It’s not always easy playing with the boys either.

In sharing experiences at the park, Bella Kenworthy said she sometimes gets mad at boy skaters because they snake in front of her run and don’t wait their turns.

Aside from trying to get more girls involved in the sport, the Pink Helmet Posse has also made it a mission to show cities without skateparks, like Dana Point, that there are young skaters who enjoy skateboarding but are forced to drive long distances in search of a safe and legal place to skate.

While there are plenty of old beliefs that the Pink Helmet Posse is attempting to debunk, one pink helmet and skate demo at a time, the bottom line is that the group was created out of a love for skateboarding and posse members want other girls to discover the fun the sport has to offer.

For more information on the Pink Helmet Posse, check out www.pinkhelmetposse.com.