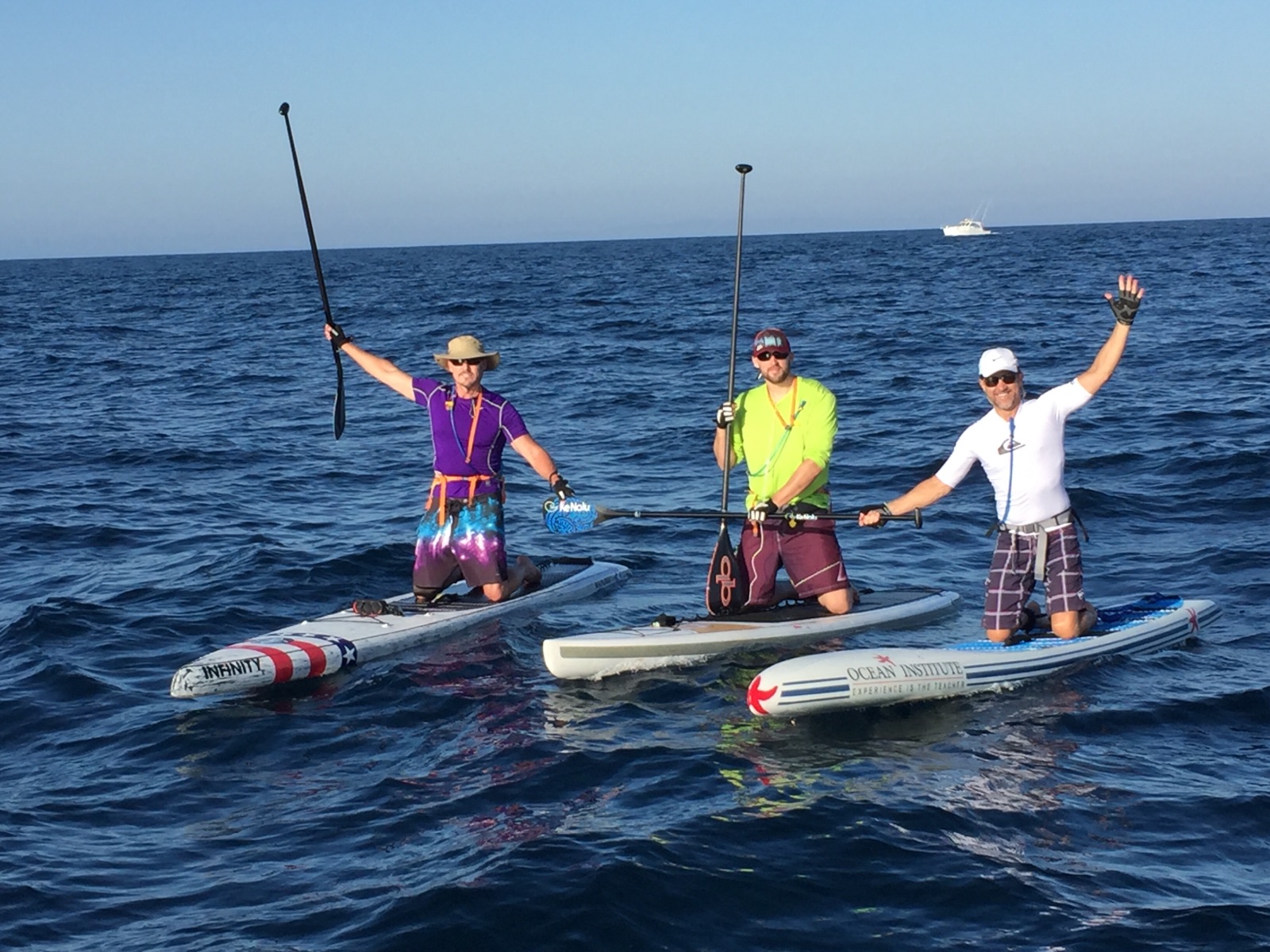 Paddling With a Purpose: SUP trio completes journey from Catalina to Dana Point

It was dark, nearly pitch black out on the water when Ron Hoffmeyer and Jeff and Austin Hughes embarked on a journey several months in the making.

The trio carried their stand-up paddleboards, backpacks and gear out to the sandy beach on Avalon and tried to eye their path out of the harbor and into the Catalina Channel.

Nearly 11 hours later, the three paddlers were celebrating at Baby Beach in Dana Point, having completed the roughly 40-mile open-ocean journey from Catalina that only a select few have conquered.

The journey was long and tough, but they were fueled by the fact they were doing it for a cause.

Hoffmeyer, Jeff Hughes and Austin Hughes, a father-son duo, crossed the channel to raise money for the Ocean Institute, where Hoffmeyer is a teacher. As of Aug. 24, the three had raised $15,135, which will go directly to the seaside learning center.

“We wanted to call attention to what the Ocean Institute offers, and I wanted to give back to this community I’ve settled in to,” Hoffmeyer, a Minnesota native, said. “The Ocean Institute gives children who have never been on a boat the chance to see marine life for the first time.”

Each member of the paddling crew brought something to the table that was beneficial to their training.

Jeff Hughes is a nighttime emergency room doctor at St. Joseph’s Hospital. His medical expertise played a crucial role in finding the right diet for each person, Hoffmeyer said. Austin Hughes, 25, is an experienced paddler that will soon be joining the Army.

Hoffmeyer and Jeff Hughes were discussing personal goals several months ago when they decided to go all-in on a paddleboard journey. While Jeff and Austin had extensive open-ocean paddling experience, Hoffmeyer’s paddling world consisted mainly of taking his SUP around the Dana Point Harbor and out to nearby ocean buoys.

The three began training vigorously in April, increasing their mileage bit by bit until they reached the 30-mile plateau two weeks before the crossing.

A huge pod of dolphins greeted the group within the first few hours of their crossing from Catalina. Normally the crossing toward the mainland is assisted by a tailwind, but the trio was not so lucky and actually had a slight breeze into their face for the first half of the journey.

Every two hours the group, which was flanked by a spotter boat, stopped for a 10-minute break to rehydrate and eat. Hard-boiled eggs, pasta, turkey and fruit was on the menu for most of the day. Hoffmeyer estimates each paddler drank about five liters of fluid over the course of 11 hours.

“Because of all our training, it worked out well. It was frankly a boring crossing with no real issues,” Hoffmeyer said. “We planned well and executed.”

Hoffmeyer, who has a degree in biology, is a jack-of-all-trades when teaching at the Ocean Institute. He shows children how to dissect squid, teaches them about the anatomy of baby hermit crabs and shows them what lies beneath the waves out on the institute’s vessels.

He never got to use his biology degree after a 34-year career in the printing industry. Four years ago, he sold his stake in his former company and devoted his life to his two passions: the environment and teaching children. The group’s paddleboard journey was a great way to assist the effort even more, he said.

“Everyone has their favorite causes,” Hoffmeyer said. “To me, the Ocean Institute checks off many boxes that are important to me. Hopefully we’ll have left some children inspired.”