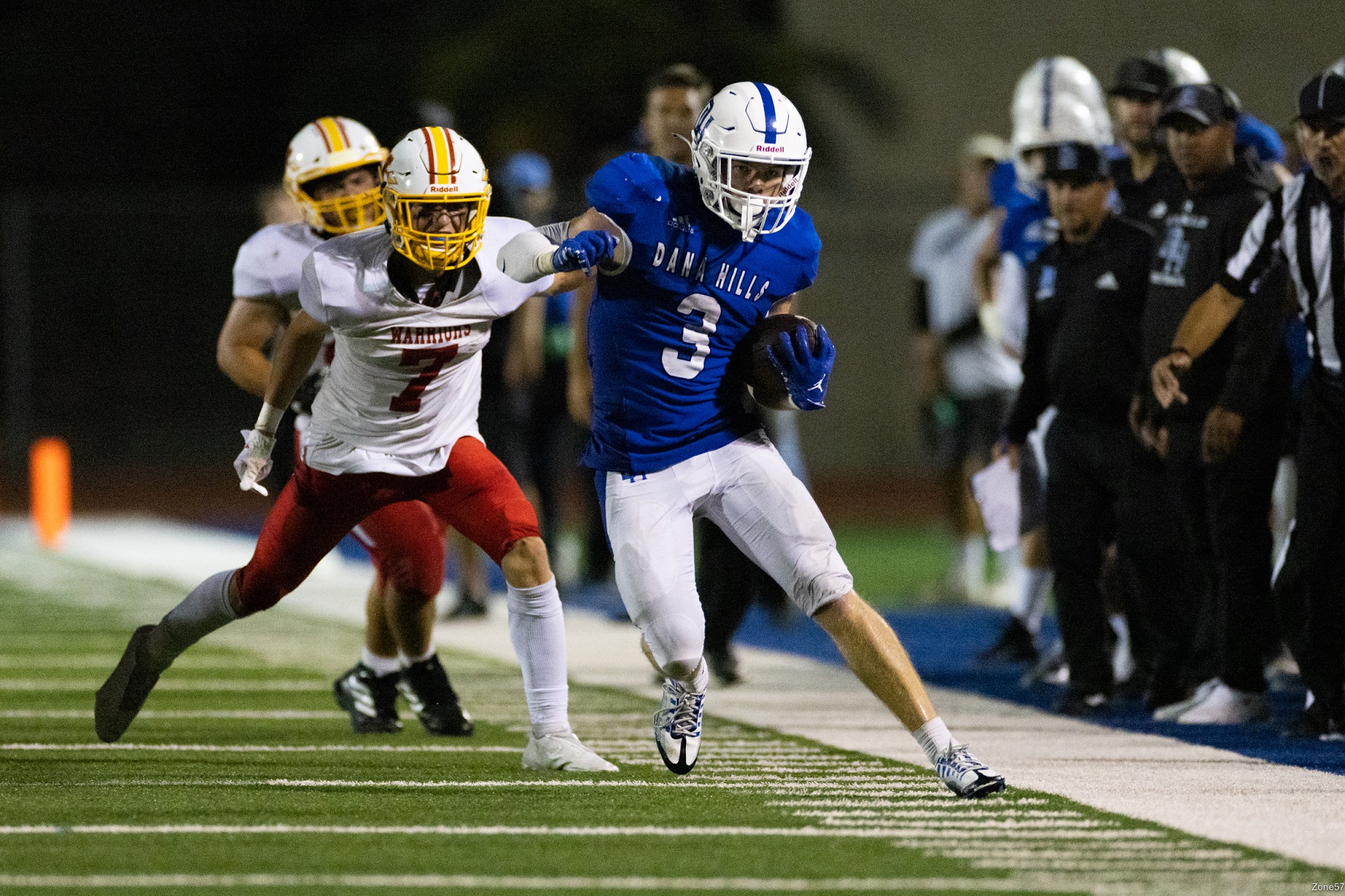 After two weeks of drama-free wins, it was only a matter of time before the Dana Hills football team found itself on the brink of heartbreak.

Luckily for the Dolphins, top players Chase Berry and Christian Guarascio pushed through a grueling battle to give Dana Hills a thrilling 50-49 overtime victory over Irvine to open Pacific Coast League play on Friday, Oct. 14, at Irvine High School.

Berry took a screen pass 25 yards to the house on the first play of the Dolphins’ lone overtime possession to cut Dana Hills’ deficit to one point. A delay of game penalty and two timeouts later, Guarascio found the edge from one yard out for the game-winning two-point conversion.

“We had a few (audibles) called and when we lined up, I was just thinking, ‘Give me the ball. I want the ball,’” Guarascio said of the play call that put the game in his hands. “I was hoping for it, honestly.”

The county’s leading rusher finished with 164 yards and three touchdowns on 36 carries and was the focal point of the Dolphins offensive attack down the stretch.

Connor Vernon went 15 of 26 passing for 257 yards and three touchdowns, Noah Kucera hauled in eight receptions for 131 yards and Berry had 126 yards and two scores on five catches.

A fast start and humidity late in the contest led Dana Hills to lean on Guarascio, as he ran the ball 11 times during a 14-play, seven-minute drive in the fourth quarter that stalled out in Irvine territory.

Dolphins head coach Tony Henney said the approach was necessary given the injuries to downfield threats Berry and Noah Kucera due to cramps. Henney commended his running back for playing a majority of the game and staying tough.

“I knew coming into this season that we were going to be better up front as an offensive line, and I knew he was going to be a tank,” said Henney.  “We didn’t hide it from anybody. From day one on, we basically said, ‘If you want to beat us, you have to stop him.’”

The depth concerns for Henney motivated him to go for two in overtime, fearing further risk of injury if play continued on.

Given the offensive explosion start to the game, most in attendance for Irvine’s Homecoming game Friday likely didn’t anticipate the slugfest that took the contest to the end of regulation.

Dana Hills and Irvine combined to score nine touchdowns during the game’s first 11 possessions, bringing the score to a blistering 35-28 with 7:31 left in the first half. The score held to halftime.

Big plays and great field position contributed to the scoring.

The Dolphins quickly marched down the field after starting its first drive at the Irvine 42-yard line, with Berry catching his first touchdown pass of the night on an 11-yard play.

Both teams would punt on their next possession, and Irvine started the craziness, as receiver Ian Hew beat his man and caught a floater from quarterback Joseph Tierney for a 60-yard touchdown on the first play of the drive.

For three of Dana Hills’ next four scores, Guarascio capitalized off a 37-yard catch and run by Kucera, a 35-yard Berry reception and a long kickoff return by Berry. Berry also notched a 48-yard receiving touchdown.

Tierney ran for a 75-yard score and found Deacon Moss for an 80-yard touchdown as part of the dual-threat quarterback’s excellent first half. The junior signal-caller completed 9 of 10 passing attempts for 216 yards and two scores, to go with 111 yards and one touchdown on five rushes.

On the game, Tierney completed 12 of 19 attempts for 287 yards and two touchdowns as part of an effort that totaled 411 yards and four touchdowns.

Irvine running back Evan Hasegawa also busted a 41-yard touchdown run in the midst of the scoring fest. Hasegawa finished with 174 yards and three scores on 23 carries.

Dana Hills continued its momentum to begin the second half. The Dolphins forced a three-and-out and drove 75 yards down the field, the possession ending with Vernon finding Nate Depierro for a 5-yard touchdown.

Henney saw that the tide had shifted, notably right after a play in which two Dolphin defensive backs collided on a pass that should’ve ended in an interception and left Kucera slow to get up.

The head coach recognized how good of a program his team had faced, one that was bound to be resilient.

“I knew they were going to fight back, that they were going to battle, so, I would have liked to have taken advantage of that play,” Henney said. “You got to give them a ton of credit, because every time we had a chance to kind of surge ahead, that’s when they got their stops.”

The Dolphins converted two fourth-down attempts during their long fourth-quarter possession, but Guarascio was stopped short with two yards to go from the Irvine 24-yard line.

One play later, Dana Hills tight end and defensive lineman Ethan Brougham gave his team another chance to end the game in overtime by intercepting Irvine. However, the Dolphins couldn’t convert the turnover to points as Deacon Hill missed a 56-yard field goal with 16 seconds left.

After the win, Henney told his team that their hard work in the off-season paid off in the moment and that he was proud of their effort.