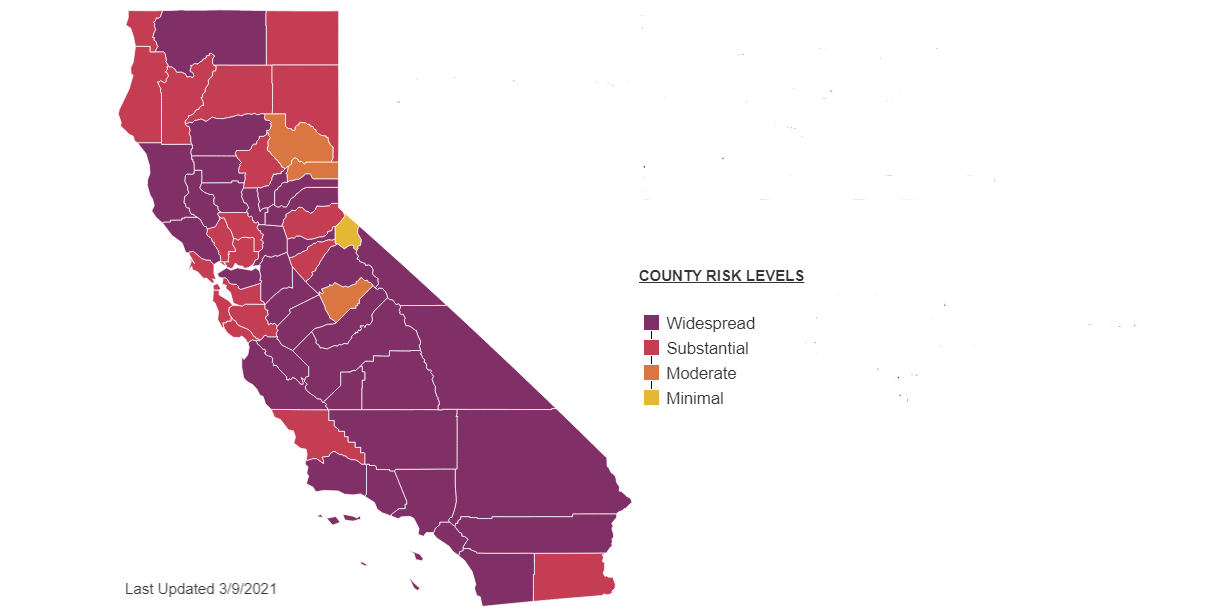 The two-week clock for Orange County to take a step down to the red “substantial” tier started with the state’s coronavirus tier update on March 2, during which the county continued recent steady drops.

To move down, counties must have all three metrics at the next level down (i.e. down to red to leave purple) for two straight weeks or have both its testing positivity and health equity positivity down two tiers below their current level (i.e. down to orange to leave purple) for two straight weeks with the case rate declining. Orange County now sits at those latter thresholds.

Counties can only move down one tier at a time and must be in a tier for three weeks before moving again. March 16 is the earliest Orange County could move to the red tier, and if trends hold, the earliest the county could reach the orange tier would be April 6.

If Orange County returns to the red tier for the first time since the “emergency brake” was pulled on the state’s four-tiered, color-coded coronavirus monitoring system in mid-November, several businesses would be allowed to reopen or restart indoor operations, including restaurants, movie theaters and gyms.

Orange County reported 6,025 tests on March 9, and has over 3.1 million cumulative tests so far. There have been 237,416 recoveries to date.

In terms of metrics, Orange County has six new cases per day per 100,000 and a 3.2% positivity rate based on a seven-day average.

In comparison, statewide metrics are 8.1 new cases per day per 100,000 and a 2.8% positivity rate based on a seven-day average.

On the vaccine front, the state reported it had administered over 10 million vaccine doses, with 867,947 in Orange County as of Tuesday, March 9–an increase by 92,079 from a week ago.