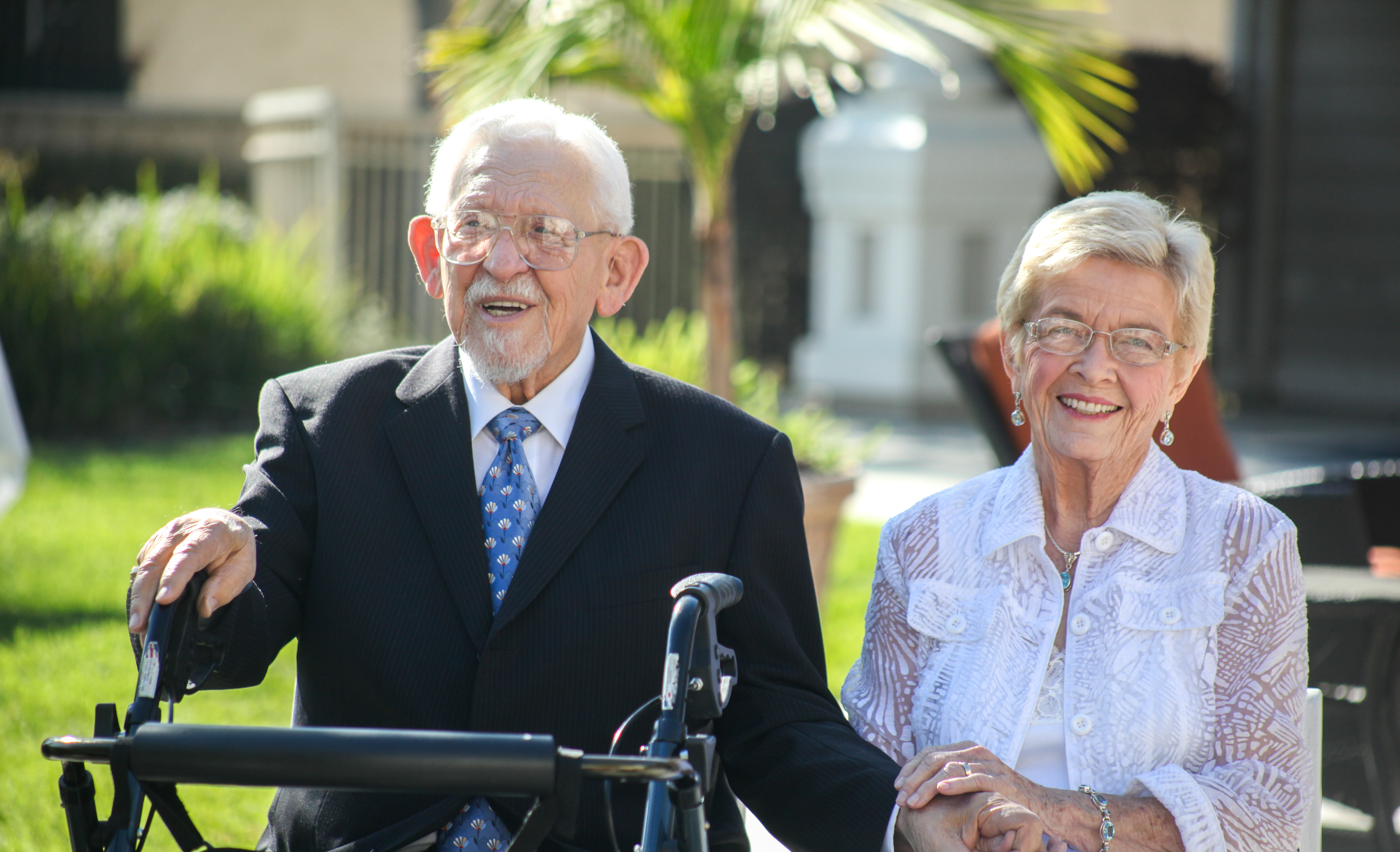 A cool ocean breeze swept across the sun-speckled courtyard Saturday afternoon as romantic ballads plucked on the harp filled the terrace with an air of amor. For four senior couples living in Aegis of Dana Point, the eve of Valentine’s Day was a time of renewed commitment to each other—a time to honor their marriage vows and cherish their love among family and friends.

Saturday’s vow renewal ceremony was hosted by Aegis of Dana Point, a residential assisted living facility for seniors located on Camino de Estrella in Capistrano Beach. Anne Christensen, Aegis marketing director, said the idea for the renewal came in part due to a recent uptick of spouses looking to attain specialized care for their loved ones.

“We all go through big changes in life, but when it’s your love of 50 or 60 years and you have to entrust someone else to care for them, it’s a big deal,” Christensen said. “For the couples with only one spouse living here, this is still like home to them. They’re always here together—we’re a family. So this is our way to give back and say thank you.”

With a floral arch and garden backdrop setting the scene, Pastor Ron Sukut, of Cornerstone Community Church in San Clemente, led each couple through their vows after explaining how the pair met and the path their love has taken over the years.

In one afternoon, 163 years of marriage were renewed with eight “I do’s” and a kiss.

Nestor and Cheryl have been happily married for 32 years, and they still remember the exact day they met—both were getting tested for allergies at a doctor’s office. Cheryl said she was initially attracted to Nestor’s pheromones, while Nestor was immediately drawn to the “beautiful woman” with the stunning eyes. After being injured at work and undergoing numerous surgeries, Nestor said Cheryl has always stood by him “through thick and thin.” Their advice for a lasting relationship? Be patient, be kind and never take an argument to bed.

As luck would have it, George and Jane were able to renew their vows on the exact day they were married—58 years later. The young lovebirds took to Las Vegas to get hitched, and George is quick to tell the story of how a half-full bottle of champagne exploded in his Porsche while driving through the desert on their way home—it was a wild ride to say the least. With Jane now in memory care, George visits his wife daily to care for her.

Hiram and Andrea have been married and madly in love for 68 years. Andrea was just 19 and Hiram was 23 when they met at a friend’s wedding—he was the best man and she was the bride’s friend. Seven months later the two were wed and started their life together in Pacific Palisades. “I loved his big blue eyes and his sweet ways,” Andrea said. “He was the nicest man I’d ever met.” “Oh my gosh, I liked everything about her!” Hiram said. “She’s just the most wonderful peach in the world!”

Bill and Corinne have been married for five years, but they’ve known each other for 25. After their respective spouses passed away following longtime marriages, they started seeing each other in the same group of friends, which eventually shrunk in size until they were the only two left. One day, the duo was going to church when Bill began falling and grabbed Corinne to keep from losing his balance. Their fellow churchgoers ended up witnessing Corinne lying on top of Bill in the bushes. “That’s when we decided we ought to get married,” Corinne laughed.