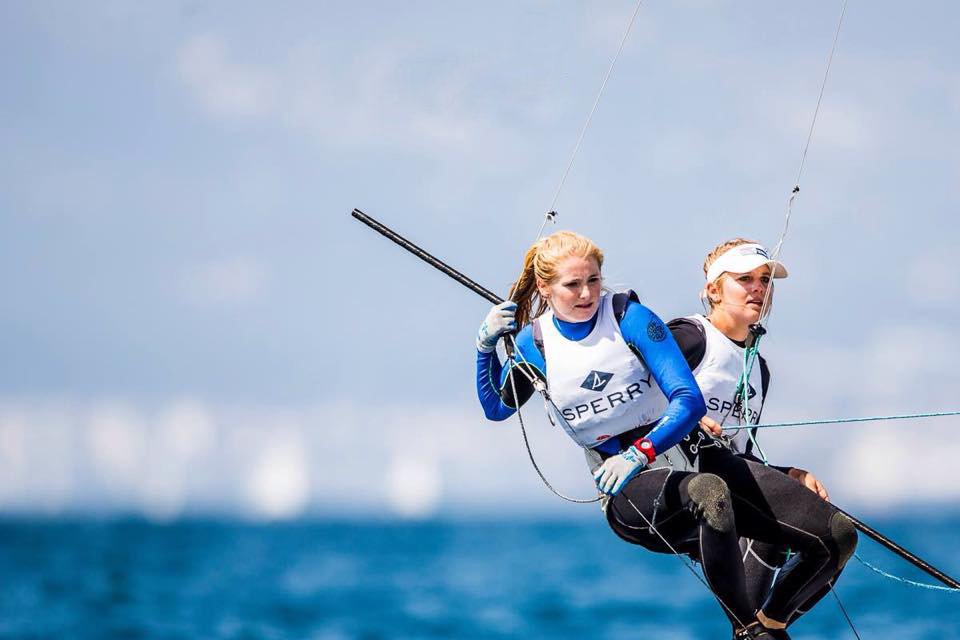 On the Road to Rio

If the ocean can be considered a blank canvas on which a competitive sailor has the opportunity to create, Paris Henken is an up-and-coming artist wielding a brush.

Henken, a San Clemente native, and her racing partner, Helena Scutt, have been painting master strokes in their 49erFX-class sailing boat at an elite level in 2016. The duo, which has been competing in the U.S. Sailing pipeline for years, now has a chance at creating a masterpiece.

After a 17th-place finish at the ISAF Sailing World Cup in Miami in January and a 20th-place finish at the 49erFX World Championships on Feb. 12 , Henken and Scutt qualified to represent the United States in the newly formed 49erFX class competition at the 2016 Olympic Games in Rio de Janeiro, Brazil.

Henken and Scutt’s performance at the two major events solidified their standing as the top American team in the 49erFX class, a high-performance skiff, which punched their ticket to Rio.

Henken, 20, grew up sailing at the Dana Point Yacht Club and moved to San Diego to focus on competitive sailing when she was 10 years old. Since then she has shown an aptitude for guiding multiple classes of boats and, once she teamed up with Scutt, has become one of the young faces of American competitive sailing.

“Helena is the scientist onboard, and Paris is the artist,” U.S. Sailing Team Sperry coach Willie McBride said. “(Henken) just has this natural sense that I think she’s developed from sailing so many of these high-performance boats. She’s really able to feel these tiny changes before many of the other sailors are … the two together are a really powerful combination.”

McBride was brought in to guide Henken and Scutt toward an Olympic push in late 2015. McBride noticed immediately how Scutt, whose responsibility as crew is to work and adjust the 49erFX’s main sail, was more meticulous while sailing, always paying attention to the minute details. McBride says Henken, who steers the skiff, has an unparalleled connection to the boat and how it reacts in the water.

The two need to constantly work in tandem when sailing in the 49erFX, a larger, two-man boat that can travel upwards of 20 mph, depending on wind. Each two-member team is tethered to the boat and they suspend themselves to the point where they are parallel with the water below, their feet gripped to one of the boat’s wings. 49erFX races normally consist of boats making laps around buoys for 1 mile and is considered one of the faster classes in competitive sailing.

Henken’s journey toward becoming an Olympic athlete demanded her full attention. That’s why, after her freshman year at College of Charleston in South Carolina she decided to take a year off and immerse herself in the sport. Scutt, 23, who is in the process of completing her master’s degree, did the same.

“When we started this campaign we wanted that goal: to go to the games,” Henken said. “We didn’t know if we were going to accomplish it, but we were definitely going to try our best … we both made a lot of sacrifices. It was an awesome feeling to know we finally did it.”

Now that U.S. Sailing Team Sperry has proven it is the top 49erFX team in the country, they will test their strengths against the rest of the world.

Henken and Scutt will compete in two tune-up events in Spain later this spring and, starting in May, they will begin taking monthly trips to Rio until the Olympics begin.

Both Henken and McBride said the currents that run through the water in Guanabara Bay in Rio, the main sailing venue, are unusually strong, which can make for a tricky adjustment period. Henken and her team scheduled their upcoming trips to Rio to coincide with the area’s lunar cycle, which has a major effect on the tides. The team is hoping their practice runs will be identical to the ones they will encounter in August under the bright lights of competition.

With a combined age of 43, U.S. Sailing Team Sperry will be among the younger teams in the field at the Olympics, according to McBride. They will be sailing against other athletes who have competed multiple times on the biggest of stages. The team is hoping their youth will serve as a major advantage. Henken and Scutt are able to put in more hours of training and will have a physical edge other teams won’t be able to match.

“They’re up against experience but I think the two of them really bring a powerful combination into the boat,” McBride said. “I think they’re going to be working hard the next couple of months, and my prediction is they’re really going to surprise a lot of people with how they perform in Rio.”