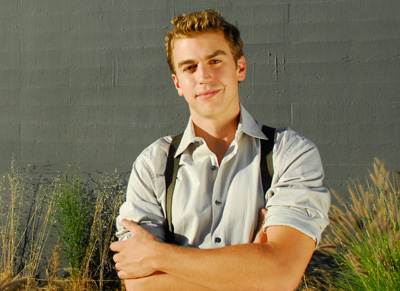 On Stage at the Coach House: Spencer Day

Described as an artistic vagabond, Spencer Day is making a stop at the Coach House on Sunday, June 22 to showcase his newly released album Daybreak.

Born in Utah, Day moved to Arizona before eventually deciding to pursue music in San Francisco. This subsequently led to his move across the country to the New York music scene. Day truly lives up to his musical vagabond image. Picking up musical styles everywhere he went, Day’s nomadic tendencies really show through his music.

“I wanted to create a musical hybrid,” Day said in his artist bio, and he did just that.

Pulling together several genres—including big band, jazz and a touch of pop—Day refuses to be pigeonholed while simultaneously appealing to listeners across the music spectrum.

Day received national attention with his debut album Vagabond, and his performance credits include the San Francisco Jazz Festival, the Great American Music Hall and the Herbst Theater. Day’s resume, and fan following, grew even stronger after opening for Rufus Wainwright at the Napa Valley Opera House.

See Spencer Day at the Coach House, 33157 Camino Capistrano in San Juan Capistrano, on June 22. Doors open at 5p.m. and the show starts at 7p.m. Tickets are $30. Dinner reservations are also available. For tickets and a full schedule of upcoming shows, visit the Coach House online atwww.thecoachhouse.com or call 949.496.8930.