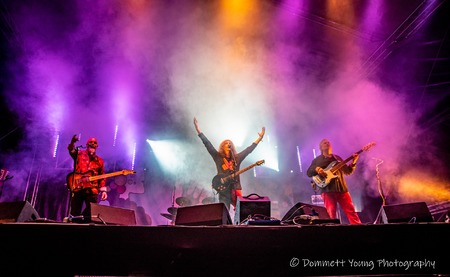 On Stage at the Coach House: EXTC

Local fans of old-school new wave and power pop are in luck—EXTC, comprising members of legendary British band XTC, will perform at The Coach House on March 27.

Though XTC—known for hits such as “Dear God” and a force to be reckoned with in the ’80s—is no more, former members have since formed EXTC. The new band is bringing in former XTC drummer Terry Chambers for a North American tour, which includes a stop at the San Juan Capistrano venue.

“It’s strange that I’m back playing in North America where, almost 40 years ago to the day, XTC stopped touring,” Chambers said. “The other XTC members won’t tour, so we’re out there as EXTC, giving it our all. And we’re loving every minute. Because that’s where we want to be—on the road giving people the best night out we can. What better way to spend the rest of our days?”

That end of touring that Chambers refers to is an infamous bit of XTC lore. The band ceased touring in 1982 after Andy Partridge, the former front man, suffered a panic attack on stage. He has rarely performed live since.

“We were holed up in a local hotel. Our tour manager summoned everyone, except Andy, to the foyer. He told us Andy was too ill to perform and that the entire tour was canceled,” Chambers said. “Andy flew back to the UK. I hung around LA for a couple of days, then flew to Australia to be with my future wife.”

Chambers eventually reconnected with old XTC bandmate Colin Moulding, which formed the basis of a new project called TC&I. After six sold-out shows, TC&I also fizzled out, with Moulding feeling he did what he set out to do with the musical group.

From there is where EXTC began. Steve Tilling and Chambers met in a pub to talk things over, forming EXTC from the ashes of TC&I. Tilling is the front man for EXTC, which has the blessing of Partridge.

Tilling, Beren Matthews, and Ken Wynne will perform with Chambers as EXTC for the current tour. Though the new band name is slightly different, EXTC will perform plenty of songs from the old XTC repertoire that fans know and love—with some new material sure to excite audiences.

For tickets or more info: thecoachhouse.com. Tickets are $25.