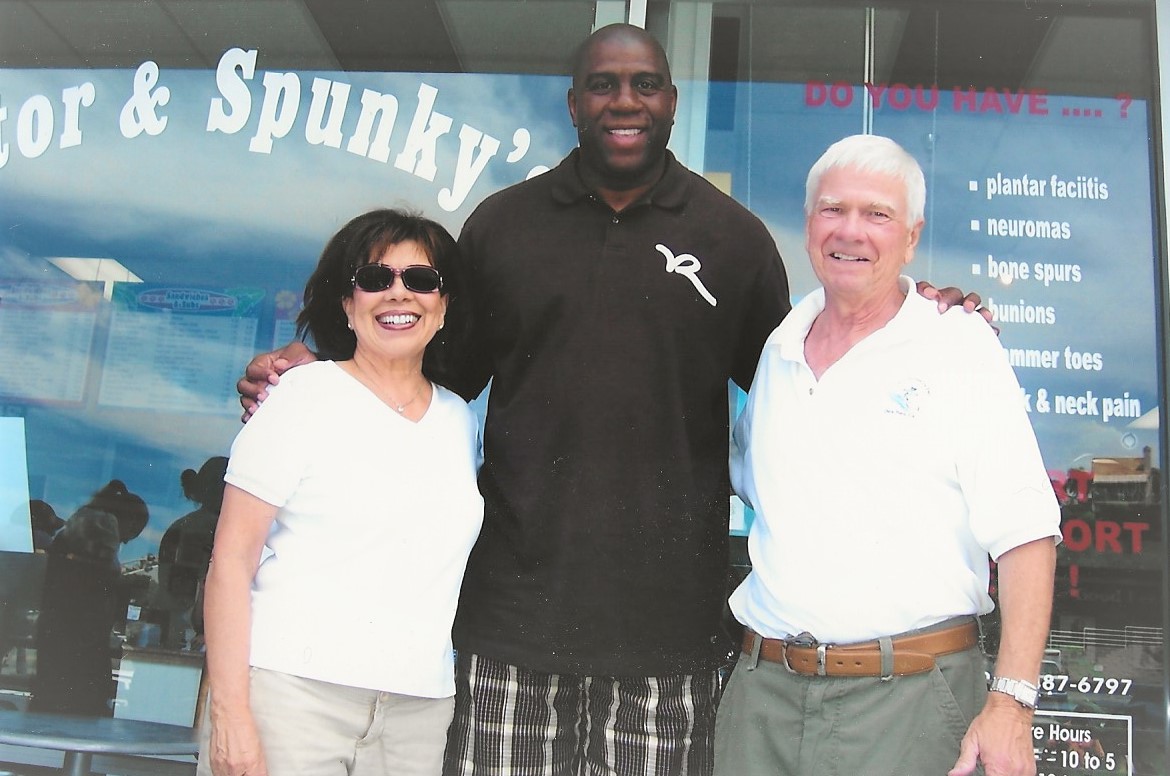 On Life and Love After 50: Was It a Senior Moment?

Jeff Freeman sells high-quality bed sheets at the Saturday La Plaza Dana Point Farmers Market. The market is open from 9 a.m. to 1 p.m. Jeff’s E-Z UP booth is near The Hat Man’s booth, where Vince “The Hat Man” and his partner, Julie, sell their custom-designed hats. I’ve known Vince for 32 years. He and Julie are friends of mine.

I visit Julie and Vince for a few minutes most every Saturday morning at the market. In doing so, Jeff and I have also become friends. He’s a sports buff and loves to chat about the latest news in the sports world.

A week ago, shortly after I arrived at the market, I heard Jeff say, “Hey, Tom, you’re wearing Magic’s number.”

I had no idea of what the heck Jeff was talking about.

He said, “Step over here and turn around.” I reluctantly did.

Then he said, “Look at the back of your cargo shorts.” I looked behind me. I was embarrassed, horrified and thought, “Is old age catching up to me?”

On my spanking-new navy blue cargo shorts, there was a vertical yellow strip with several 32s running down the back (32 was Magic Johnson’s number with the Los Angeles Lakers).

I quickly reflected on where I had been before coming to the market that morning. Oh, no! I had been at Ralphs, the Costco gas station, and at Baby Beach.

I wondered how many people had seen that strip of 32s on my shorts and had thought, “Look at that old guy; he has no idea those numbers are on his rear. He forgot to take the size-32 tag off after he purchased them.”

Had Greta seen me leaving the house with that strip on my shorts, she would have stopped me.

I removed the yellow strip and thanked Jeff profusely for helping me avoid further embarrassment.

So, what was the deal? A few days before, I had purchased the pair of cargo shorts from Costco. All the shorts on the sales table had colored tags running down the back. I had considered grabbing a size 34, but I remembered that most of the shorts in my closet were size 34, just too darn large for me now that I’ve lost weight and need a size 32.

Since selling Tutor & Spunky’s, my Dana Point deli in 2015, I was no longer eating Italian subs with tasty cold cuts and cheese; I’ve slowly shed about 20 pounds in seven years.

I thought about Magic Johnson. He came into the deli several times. Greta and I became friends with him.

A few months after first meeting Magic in 2009, I was invited to be a speaker at the AARP National Convention in Las Vegas. So, Greta and I were there. Plus, because I was a newspaper columnist, Greta and I were given press badges that gave us entry into all AARP events.

And Magic was a speaker at the same convention. Before his speech, Magic appeared at a press conference, which Greta and I attended along with 22 other members of the press.

Magic had no idea that I was anything other than the owner of Tutor and Spunky’s. At the press conference, Magic started to answer questions from reporters, and then he spotted Greta and me in the front row. I could tell he was puzzled why two deli owners would be sitting there. He nodded to us. Then, he raised his hands as if to call a timeout in basketball.

Magic said to the press corps: “See those two people in the front row? They make the best sandwiches west of the Mississippi.”

I have never seen a press corps so confused. I’m certain they were wondering, “What the heck is Magic talking about?”

After the press conference, I explained to Magic that I was a columnist. He, Greta, and I had a good laugh.

So, here it was, 13 years later, and I was at the Dana Point Farmers Market, wearing Magic’s No. 32—but not for long. Thanks, Jeff Freeman, for erasing the senior moment.

Tom Blake is a retired Dana Point business owner and resident who has authored books on middle-aged dating. See his website at findingloveafter50.com. To comment: tompblake@gmail.com.

On Life and Love After 50: Close Encounter with a Future King