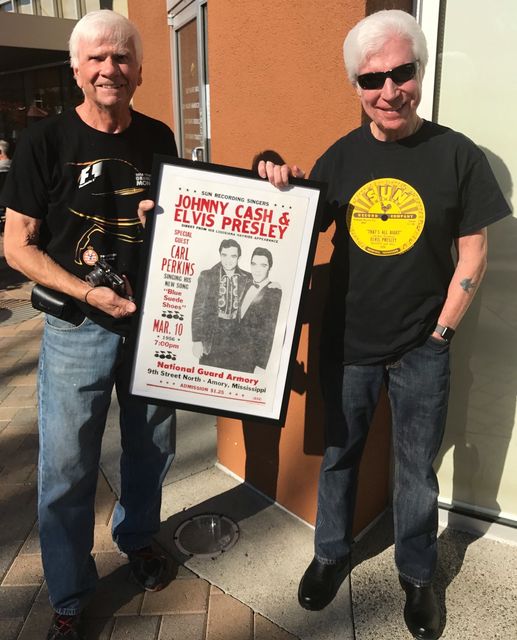 On Life and Love After 50: Dana Point Man Tells of Meeting Elvis in New Memoir

In March 2017, I wrote a column titled, “Delivering a Letter to Johnny Cash,” which described a trip my partner, Greta, and I took to Tennessee to visit the Johnny Cash Museum, the Country Music Hall of Fame, Graceland and Sun Records.

I had worked with and became friends with Johnny Cash in 1975 and 1976, and wanted to show Greta the places where I had been with him.

Dana Point resident Michael McLeavy responded to that article. He wrote: “I enjoyed your ‘Delivering a Letter to Johnny Cash’ column and thought you might get a kick out of how I met Elvis Presley, since Elvis was a friend of your friend Johnny Cash.”

Michael and I met for lunch and compared stories about how he had met Elvis and I had met Johnny, two of Tennessee’s greatest singing legends. Michael presented me with a replica of a poster that pictured Johnny Cash and Elvis Presley together, promoting a March 10, 1956 concert in Armory, Mississippi.

On April 13, 2017, I wrote a follow-up column detailing how Michael had met Elvis.

Five years later, this past February, Michael told me he had just completed an autobiography, with his meeting Elvis as one of the highlights.

He said, “I purchased your Tutor & Spunky’s Deli. A Dana Point Landmark book and was impressed that you self-published it by using Amazon Kindle Direct Publishing. Would you consider editing, formatting, and helping me publish my book on Amazon?”

I said, “I admit, as a senior, I have extra time on my hands due to staying at home during the pandemic. I’m not a professional editor, but I did learn a lot publishing my book.”

I thought getting Michael’s book edited and published might take me three weeks. So, I said to Michael, “I will do it.”

Three weeks turned into two months. Besides editing the manuscript, building a table of contents, and creating the book’s cover, there were multiple pictures to reformat and other details to address. One blessing: the book turned out to be only 132 pages.

As I worked on the book, I became fascinated with Michael’s life. He moved to Los Angeles from Scotland in 1965. His primary goal was to meet Elvis. He did that and so much more. He built a successful career in the insurance business.

Michael is an accomplished singer. He has recorded four CDs, which are available on Amazon.

Currently, Michael’s book, What Now? What Next? Where To?, is available in paperback only. The cost on Amazon is $14.99, plus shipping and taxes.

However, if South Orange County readers would like a signed and personalized copy, email Michael at mmcleavy@cox.net with the details. The charge for Picket Fence Media readers is $14.25, including delivery and taxes.

Michael has lived in Dana Point with his wife Linda since 1989.

Will I begin a second career helping people as an editor and publisher of books? Perhaps, but not full-time, as I must leave enough time to keep writing my newspaper columns. Let me know if you have a book in your future. I’m receptive to questions.

Tom Blake is a retired Dana Point business owner and resident who has authored books on middle-aged dating. See his website at findingloveafter50.com. To comment: tompblake@gmail.com.