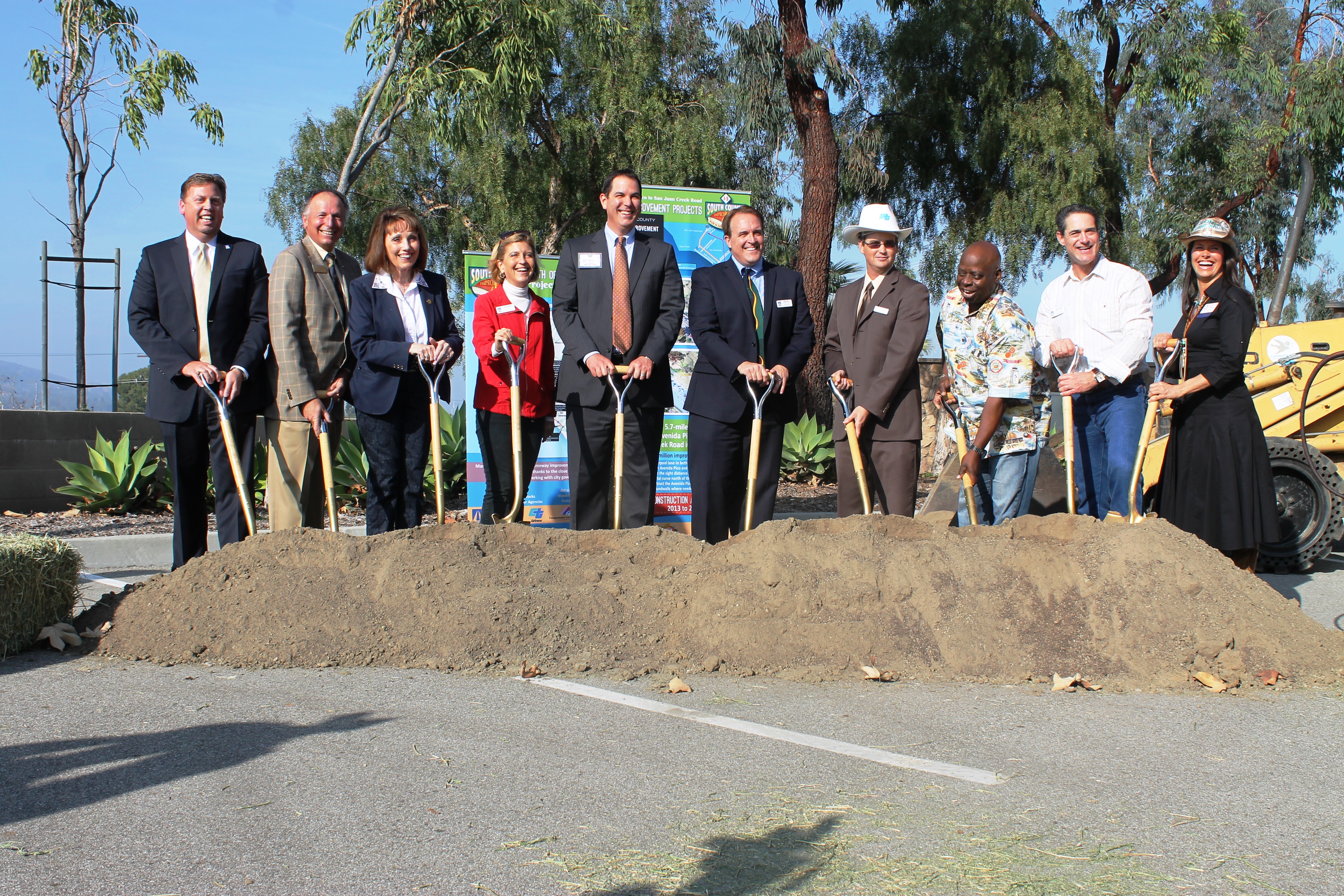 The announcement promised the project would “whip traffic congestion,” accompanied by the sound of actual cracking whips.

Officials also urged residents to be patient during the construction, as the county agency and Caltrans try to alleviate the unique bottleneck that causes major weekend backups in the area by adding a high-occupancy vehicle lane from San Juan Creek Road in San Juan Capistrano to Avenida Pico in San Clemente.

As part of the project, the Pico interchange, an important transportation hub for the city, will be reconstructed and widened. It is projected to cost $249 million and last until 2017.

The project will likely begin construction on its first phases, between San Juan Creek and Pacific Coast Highway and then PCH to Avenida Vista Hermosa, in April. Staging and engineering work will be done in the months leading up to that start, OCTA spokesman Joel Zlotnick said. Lane closures will likely largely be confined to the overnight hours.

“The work here will benefit all of Orange County,” Bates said. “I-5 is the backbone for the transportation system here in south Orange County. It is the main street that serves more than 600,000 residents.”

San Clemente City Councilwoman and OCTA board member Lori Donchak said, as a regular commuter between San Clemente and San Juan, for work at St. Margaret’s Episcopal School, she is more than familiar with the traffic issues affecting the area.

“There are a lot of people looking forward to the improved efficiency and safety that this corridor is going to afford,” Donchak said. “The OCTA is committed to delivering the M2 promise.” She also noted that the area has one of the few views of the ocean from the Interstate going south along I-5.

“It’s a beautiful piece of the country that we’re improving,” Donchak said.

She further pointed out that, unlike elsewhere in the county, the traffic is worse on the weekends than on weekdays, particularly during the summer, due to travelers coming to enjoy the area’s attractions or making their way between Los Angeles and San Diego.

San Juan Mayor Sam Allevato said the city hopes to take some of the lessons from another transportation project, the refurbishment of the Ortega Highway Bridge, as a model for working with businesses in the city.

“We’ve learned from the Ortega project to work closely with businesses and residents and with Caltrans and OCTA,” Allevato said. “We’re all partners in this. I think this project will expedite traffic through town. It’ll make folks’ commute a lot easier and less stressful. Hopefully it will alleviate some of the traffic on our local streets.”

Allevato said San Juan is frequently used by commuters looking to bypass backups on I-5.

“By adding these lanes, hopefully it’ll relieve congestion and keep people on the freeway,” Allevato said.

Donchak said she hopes residents will be patient with the construction.

“It’s not going to be business as usual,” Donchak said. “We need to drive more deliberately, safely and cautiously than ever.” She also encouraged residents to keep their eyes on the project and contact OCTA if anything is not as it should be.

“The biggest two question marks are how this is going to feel when the Marblehead Coastal project goes vertical, which is very soon, and what’s it going to be like in the summer,” Donchak said. The most significant work in San Clemente likely won’t begin until after the summer, however.

Bates said while the process may be painful for a time, the finished project is something she is hopeful about.

“I equate it to getting your kitchen remodeled,” Bates said. “You still have to cook and do all that, and it’s very painful, but once you walk into that brand-new kitchen, it’s a wonderful thing. Even with the little discomfort you suffered.”

Zlotnick said the agency would try to provide as much information as possible during construction, including sending out weekly email updates, as they have during the Ortega project.