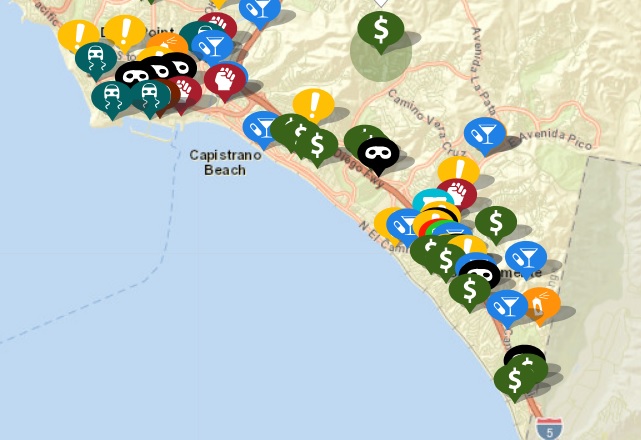 More than a year after the Orange County Sheriff’s Department (OCSD) discontinued the narratives that described reported crimes in its blotter, the department has debuted its promised crime map, through the software CrimeMapping.

This map also does not have narratives attached to it, just as the blotter policies were amended in June 2017, but it does provide 15 different types of crime as indicated by various icons and when they occurred. People can also customize the map to look for specific crime incidents in their areas.

The CrimeMapping software the county is using comes from TriTech Software Systems based in San Diego. Orange County Board of Supervisors approved a contract with the company for just less than $700,000 for two years in November 2017.

OCSD at the time said it expected the map to be ready in “the coming months,” but it’s been almost a year to the day since that declaration.

“(The map) will have the basic information, and it’s not going to have any narrative to it,” said Jaimee Blashaw, a public affairs manager with OCSD. “We put the (preliminary) calls into the map, but those (incident labels) could change on the map once deputies get on scene” and report the actual incident.

If people want more information on a specific crime incident, they can use the incident number provided in the map post and request a report from the records department, which can be found by clicking here.

“We’re really trying to get people to be active and participate in this and see the crimes that affect their neighborhood,” Blashaw said. “It might affect change, and if you’re seeing a lot of car burglaries, people may remember to lock their car and those kinds of actions.”

The blotter entries do not reflect calls that came in immediately; the CrimeMapping software will be updated every 24 hours when OCSD enters the calls or amends calls.

“I hope CrimeMapping encourages the community to take an even more active role in working with us to increase the safety of our neighborhoods,” said Orange County Sheriff Sandra Hutchens in a press release on Friday, June 8.

“My hope is that people will glean the information and help them feel like they know more from it,” Peters said. “I hope it at least makes them feel a little safer.”

In November 2015, an incident occurred involving the daughter of an Aliso Viejo director of community development, Karen Crocker. Orange County Superior Court documents show Crocker sued Orange County and a number of individuals for defamation after her daughter was arrested along with her boyfriend on charges of theft and the incident was documented, she alleged, with false information in the blotter.

The blotter entry stated a woman had come to the store where officers had detained her daughter and identified herself as a “high-ranking official” with the city of Aliso Viejo and that she knew her daughter was innocent, “just like all the other times she’d been arrested for similar charges.”

Crocker’s lawsuit complaint stated that the incident was misrepresented, and she stated that she was suspended without pay from the city of Aliso Viejo on Jan. 8, 2016 as a result of the incident. Crocker sued for wrongful termination, initially filing a defamation suit in January 2017 and went to court shortly thereafter. She later amended her complaint on April 25, 2017. The case was closed in August 2017.

On June 12, 2017, OCSD announced that it would remove narratives from its blotter posts. Although the court records examined by the San Clemente Times did not show that removal of the narratives was part of any settlement between the county and Crocker, sources close to the situation told SC Times that discontinuing the detailed posts was the result of “a lawsuit”—not necessarily Crocker’s.