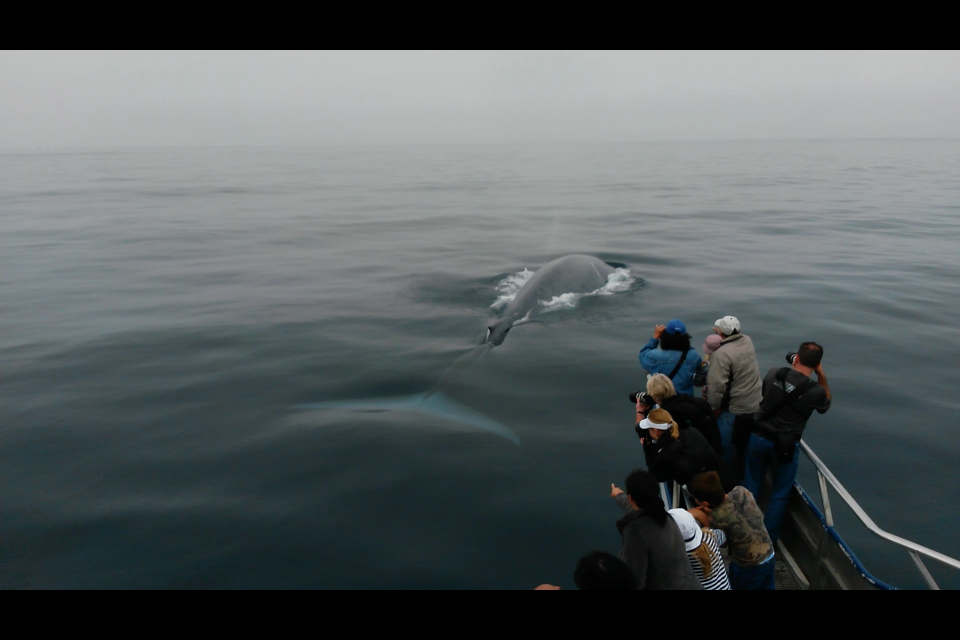 On the Ocean: Winter Months See Plenty of Visitors Just Passing Through

For many people, spending the winter months in California is a dream. This also applies to certain whale species. Despite our year-round mild climate, the ocean off our coast is generally quite cold due to currents moving southward from Alaska. The perfect combination of our chilly water, climate patterns, coastal upwelling and plenty of California sun contributes to our having some of the most productive waters in the world.

Phytoplankton and zooplankton thrive in these conditions and their presence drives the entire ocean food chain. The abundance of these tiny marine algae and microscopic critters provide plenty of sustenance for a great diversity of fish, whales and dolphins that call our small section of the ocean their home.

Just like people though, some opt to live here permanently while others only stay for a brief period during their migrations. And it is not only the ocean currents that move southward from Alaska. For many whales, November to March mark the months where thousands travel from their summer feeding grounds in the Arctic to warmer waters. Although Maui, Hawaii is a hotspot winter destination for humpback whales, many travel to Mexico to mate, give birth and nurse their young. This is great news for California whale watchers, as we can often witness these behemoths as they pass our coastline.

Pacific gray whales follow the humpbacks’ lead and are known to make the longest migration of any mammal on earth. They travel between 10,000 to 12,000 miles round trip, annually, between the Artic seas and the warm lagoons of Baja, Mexico. These whales tend to stay close to shore during their migration and some biologist believe they take their navigational cues from the visualization of our coastline’s landmarks and by listening to near shore wave action. Another hypothesis is that whales respond to the earth’s magnetic field using small particles of magnetite (iron oxide) in their brain. Iron oxide particles act like a built-in compass for the whales. February through April is peak season to see gray whales migrating past Dana Point. During these months, many cow/calf pairs are making the return trip to the Arctic, and you don’t have to venture off shore far to witness them. Most of the mothers stay close to land with their young. This strategy helps the pair avoid predators that may be in deeper waters, such as pods of orca.

Not all whales and dolphins come and go from our waters. Some are year-round residents who make regular appearances. Common and bottlenose dolphin, along with minke and fin whales, can be seen locally, year-round. While several other seasonal visitors include blue whales (in the summer months) and risso’s dolphin and Pacific white sided dolphin during the winter time.

Ultimately, the ocean holds many gifts for us to discover. So, no matter what the season, whale and nature lovers in California will surely see something interesting.

Leslie Kretschmar grew up in the Midwest, fascinated by the ocean. She attended college at Montana State University and Oregon State University studying Organismal and Marine Biology. Her passion for the sea brought her to the Ocean Institute in 2007 and she is now the Director of At Sea Programs onboard the Institute’s 65’ research vessel: Sea