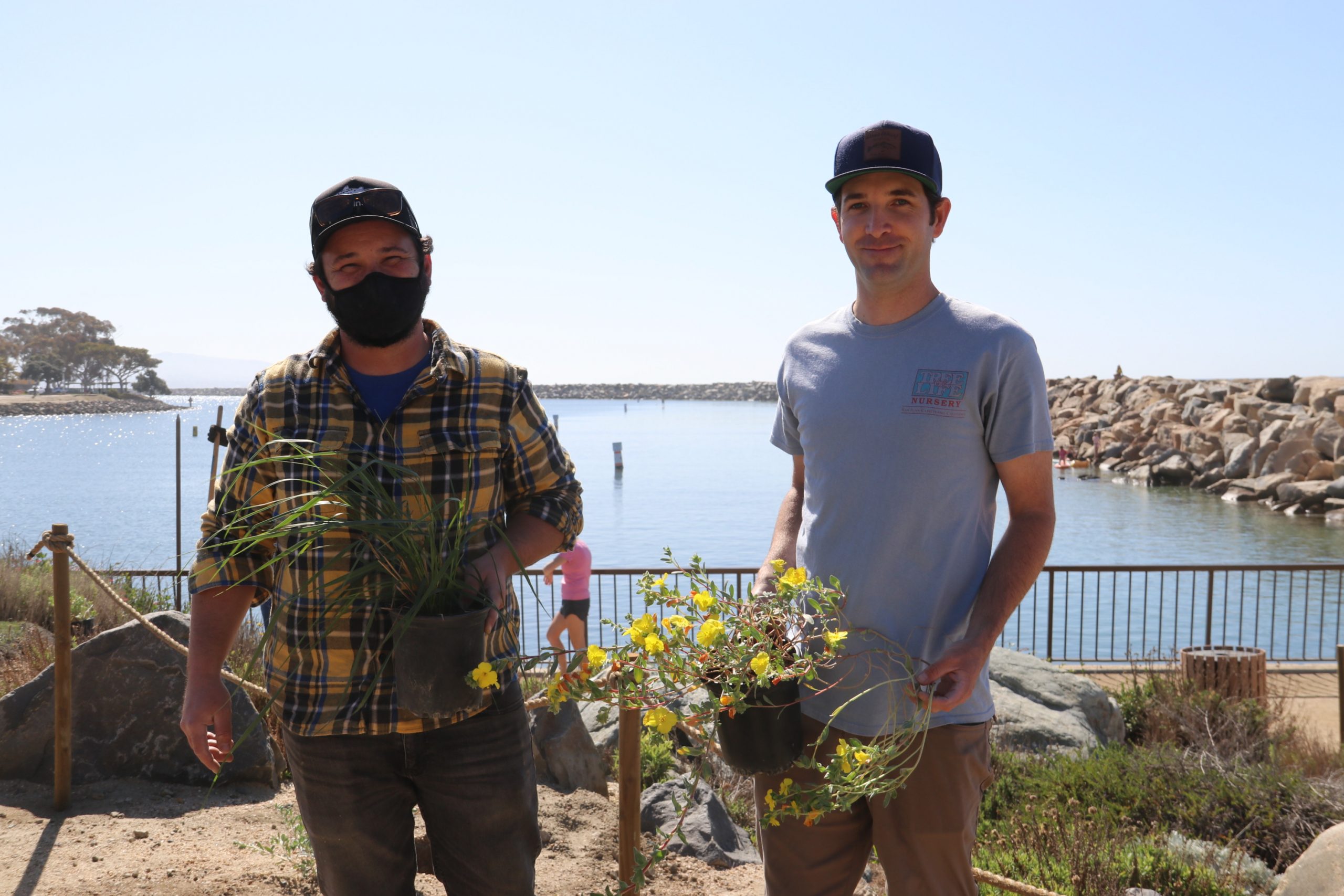 Any time you make a garden, Tree of Life Nursery founder Mike Evans says it’s important to ask yourself what kind of story you are trying to tell.

As a way to tell the story of the Pilgrim’s legacy, Ocean Institute is partnering with San Juan Capistrano’s Tree of Life Nursery in restoration of the Old Cove Native Plant Garden located behind the Institute’s campus by incorporating pieces of the iconic vessel and installing native plant species.

The Pilgrim was once a full-sized 1945 replica of the merchant ship that Richard Henry Dana detailed in his classic novel Two Years Before the Mast. It keeled overnight about a year ago and sank in her slip at Dana Point Harbor. The Ocean Institute and other stakeholders, including the U.S. Coast Guard, determined she could not be safely removed from her slip without demolition. Her removal was performed piece by piece over the span of a week with extreme caution, allowing Ocean Institute crewmembers to salvage items for future display.

Now the Ocean Institute will incorporate items for display into the garden.

“So far, we’ve used sections of the ribs or framing cut down into pieces to create walkways that lead through the garden,” said Dan Goldbacher, the Ocean Institute’s director of maritime programs and campus facilities. “We’re going to keep bringing in pieces that will be incorporated into educational field trips.”

Staff also created a staircase using natural landscape and the ship’s planking. With the garden showcasing native plant species from the California coast and Channel Islands, Goldbacher adds that the project will serve as an educational tool on geology, Native American history, ecology, and Richard Henry Dana’s voyage to the area.

While the nursery was first involved in efforts in the original garden in 2001, the latest project will include 40 different plant species.

“One of the cool things with this garden is we created it so it can be accessible for everyone,” Goldbacher said. “There’s a rhyme and reason for everything that’s there. We plan to install interpretive signage so people can better understand the importance of native plants, native American uses, medicinal properties and more.”

Goldbacher worked with Evans and Kevin Allison, both of Tree of Life Nursery, in selecting plants that were drought-tolerant, increase local pollinators and could handle the nearby coastal ocean spray.

“The proximity to the ocean itself is what’s setting this garden apart,” Evans said. “But the overall story that this garden will tell is what makes it really unique. It’s going to tell several stories to thousands of visitors. We’re giving back to the community. Ocean Institute is the ideal steward because they reach so many people of all ages from all over.”

According to Allison, the nursery’s production manager, the garden has a solid foundation of native plants that have naturalized without additional irrigation since Tree of Life Nursery’s initial involvement, thriving on rainwater alone

“Our goal was to plant more species to increase the garden’s biodiversity,” Allison said. “We also chose plants that are not only visually attractive to us humans, but will offer essential resources for our native fauna. These plants will provide food and nesting material for birds, nectar, and host plants for butterflies and other pollinators.”

Some of the plants selected for the garden include Beach evening primrose, Wishbone bush, California Aster and California Box Thorn.

“We also included plants with historical value for humans as food, natural medicine and boat-building materials,” Allison added. “All these factors are in efforts to help the Ocean Institute’s educational mission while providing and sustainable natural garden for our community.”

Overarching goals for the garden were to increase its biodiversity by planting more plants native throughout coastal Southern California, the Channel Islands and Baja. Evans and Allison picked plants with highly supportive traits for local wildlife, such as nectar and seeds.

For Allison, the garden’s stories of maritime and plant education are also personal.

“My fondest memory was the weekend outings on the tall ships when I was about 8 and 9 years old. It was a big inspiration for me wanting to become a sailor,” said Allison, a Dana Point resident and boater.

In addition to carrying out the Tree of Life Nursery’s dedication to this garden, Allison will be volunteering with the Ocean Institute as a Dana Point resident, bringing his horticultural experience and study of natural history to the garden.

“My garden at home in Dana Point has a similar theme with plants from coastal California and the Channel Islands,” Allison said.

While Allison’s home garden incorporates native plants in celebration of local ecosystems, species were also selected in tribute to his wife, telling the story of their relationship with plant species spotted on their initial nature hikes together.

“I want to help the Ocean Institute plants thrive and tell their story for others in the community to explore and discover,” Allison said.

Goldbacher says the garden will be utilized for education as part of the many programs the Ocean Institute offers, including its work in serving more than 10,000 underprivileged youth each year. The maritime director was one of the first Ocean Institute staffers to receive the phone call early Sunday morning last year that the Pilgrim had sunk at her slip. Having cared for the vessel prior to sinking, and helping oversee her excavation and demolition efforts to the end, the installation of her parts serves as some form of closure.

“The Pilgrim came to the Ocean Institute for education,” Goldbacher said. “It hurt to see her go. But now she’s going to continue to serve her purpose in a different way.”

For those interested in donating to the Ocean Institute’s restoration efforts, Goldbacher can be contacted at dgoldbacher@oceaninstitute.org.