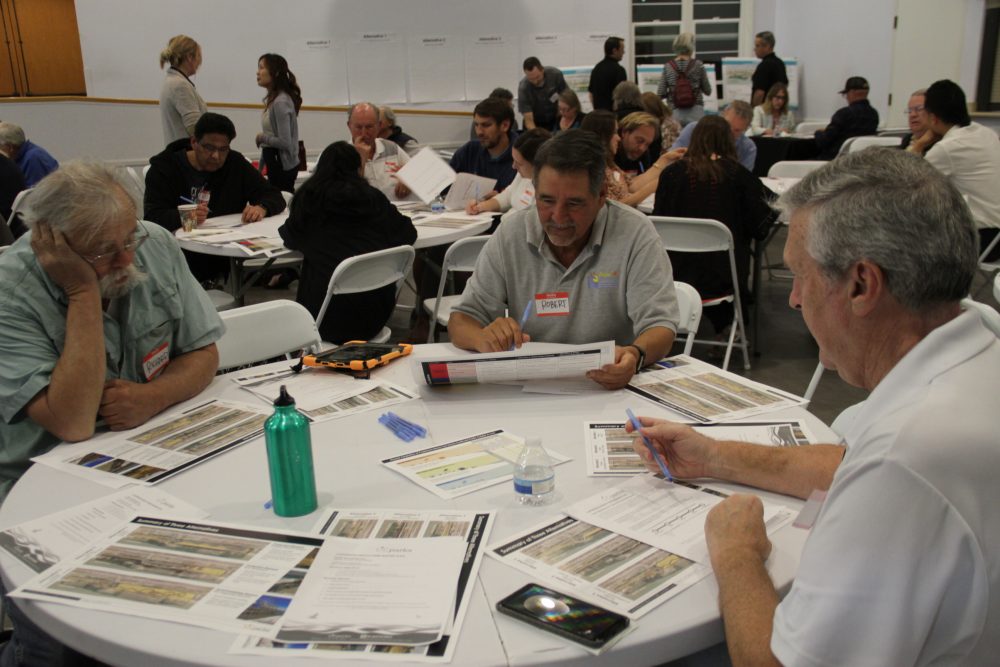 OC Parks held a public workshop in Dana Point on Wednesday, Feb. 26, when they presented three design proposals, or alternatives, to help protect amenities and public access at Capistrano Beach Park, which has suffered significant erosion conditions within the past few years.

Wednesday night’s meeting was the second in a series of ongoing community meetings the agency will conduct as it looks to get feedback and input from stakeholders regarding the Capistrano Beach Park Master Plan.

The first alternative, which OC Parks labeled as the protective strategy, proposes to mount a sculptural vertical seawall to mimic a natural environment. The amount of the wall that’s exposed will fluctuate with sand levels, according to the agency.

The vertical sea wall would be imbedded into the ground, providing a “strong foundation as the shoreline beach erodes,” according Kim Garvey of Moffatt & Nichol, a coastal engineering firm. She also explained that as sea level rise occurs, the sea wall allows for more structures to be added to protect from flooding.

The sea wall, Garvey said, is a proven structure in terms of overall life span, and it is compatible with regional measures such as beach nourishment.

This specific Protective Alternative would allow for the largest protected beach terrace area, access to the beach and water, as well as provide the most protection for landward infrastructure and onsite amenities.

Such amenities and infrastructure include a public plaza area with seating and picnic tables, a coastal trail to connect to Doheny State Beach, a pedestrian walkway and the beach terrace. As for the price, Garvey notes, it would be one of the more costly proposals.

Under the second alternative, which would be a hybrid of the protective strategy and a retreat approach, a rock revetment would be installed. The revetment crest could be raised as needed for future sea level rise impacts, and the amount of exposed rock will also fluctuate with sand levels.

C.C. LaGrange, a senior associate for Placeworks—the lead consultant for the Master Plan—explained that the amenities for the Protect + Retreat Alternative include a half basketball court, ramp to the water, a coastal trail to Doheny and a pedestrian walkway. There’s also the potential to have a medium-sized, unprotected beach terrace area.

According to OC Parks, this proposal’s beach terrace would require imported sand, and temporary amenities such as volleyball courts, fire pits and picnic benches. The revetment would offer partial protection to landward and onsite infrastructure.

Garvey explained the rock revetment approach would also be compatible with long-term and regional strategies and requires relatively low maintenance. The relative cost to implement this alternative is considered in the low range.

The third alternative is another hybrid, characterized as an Accommodate + Retreat strategy, wherein a pile-supported structure would be utilized similar to the Santa Monica Pier and San Clemente Pier.

With shoreline piled structures, Garvey said, “you have facilities that are located high above the wave action, allowing the beach to retreat.” She also said the platform elevation would be designed to accommodate sea level rise and could be compatible with future regional strategies, while the overall maintenance of the piles themselves is relatively low.

Like the previous approaches, this strategy would have a coastal trail to Doheny, a public plaza and a ramp to access the water. A potential beach terrace area would be unprotected and relatively small compared to the other two alternatives, and it could include a pedestrian walkway, volleyball court, fire pits and picnic benches.

As for the landward infrastructure, the third alternative offers no protection, but it does offer partial protection for onsite amenities, according to OC Parks. The proposal would fall under the high-cost range.

Near the outset of the workshop Wednesday, OC Parks Director Stacy Blackwood explained that the three alternatives were based on the public’s feedback, stating that the workshops are meant to solicit the community’s ideas to contribute to the Master Plan.

She also noted that no matter what plan is chosen by OC Parks, in collaboration with the community, everything is subject to the jurisdiction of the California Coastal Commission.

“Even if we develop a really consensus plan, there’s still a process to go through with the regulatory agency on that,” she said. “There are other parties who are not here in this room who have jurisdiction and approval authority on this site.”

Blackwell also reminded those who attended that Wednesday’s meeting will not be the last time they hear from the OC Parks, nor will it be the last opportunity they have to offer input.

Jennifer Jung, OC Park’s project manager, said that the Master Plan process itself, which kicked off in April of 2019, is expected to take about two years to complete from the start of the work.