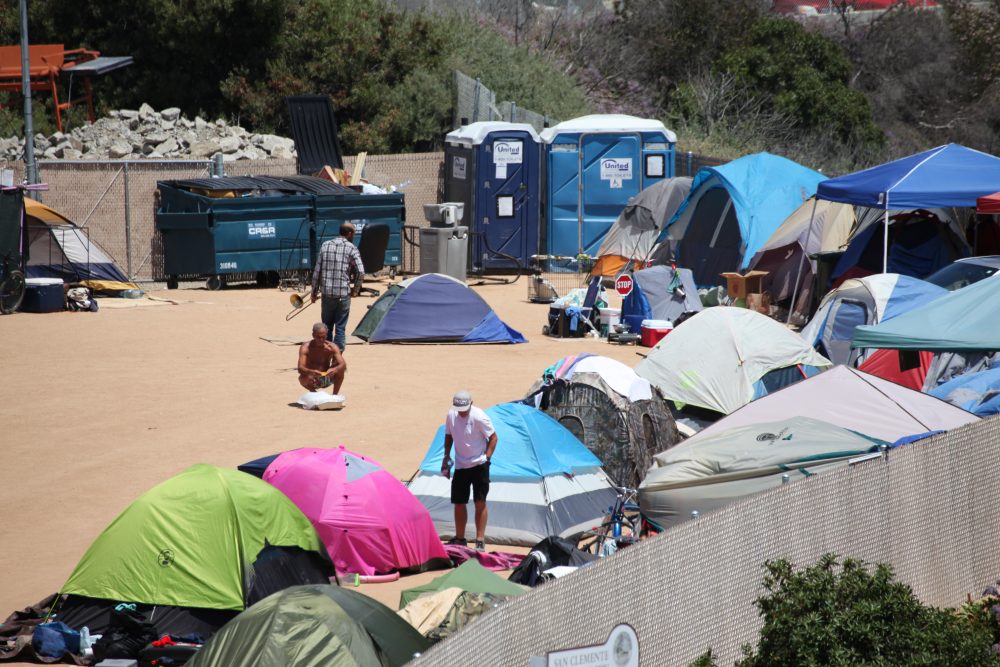 While the latest Point-in-Time Count—the biennial count of sheltered and unsheltered homeless individuals—showed an overall decrease from 2019, the Grand Jury concluded that efforts “do not go far enough to house all the homeless people living in Orange County.”

The county has mixed success in its approaches to addressing homelessness, according to the report. The Grand Jury explained that when cities relocate homeless individuals, it “sometimes resulted in simply shifting the problem to neighboring communities.”

The report also noted that ordinances criminalizing camping on public property or loitering “contributed to the incarceration of homeless individuals, including many suffering from mental illness and substance abuse issues.”

Approaches which emphasize housing-only or treatment-only have fallen short of significantly reducing homelessness, according to the report, and local opposition has also prevented shelter and housing development.

The Grand Jury recommended that the Continuum of Care and County of Orange should “leverage funding to persuade South Orange County cities to open a regional, low-threshold emergency shelter for the homeless, in addition to the Laguna Beach Friendship Shelter” by July 1, 2023.

Also, by July 1, 2023, the Grand Jury recommended that the South Orange County Service Planning Area (SPA) collaborate in finding and funding a site for a low-threshold emergency shelter for the homeless.

The report further noted that the 2022 Point-in-Time Count revealed 49% of the North and Central SPAs of Orange County homeless were sheltered as opposed to 28% in the South SPA.

U.S. District Court Judge David Carter in 2018 issued a temporary restraining order preventing those living along the Santa Ana River from being arrested until cities can identify alternative housing.

As a result of litigation, cities within the North and Central SPAs signed a settlement agreement that “outlined the number of emergency shelter beds that must be developed in each Orange County Service Planning Area.” The South SPA cities, however, did not sign on to the settlement agreement.

For a shelter to be built in South Orange County, Maura Mikulec, a member of Welcoming Neighbors Home, said that the public must be informed of the need for a shelter and that many unhoused people want to be housed.

“Thankfully this Grand Jury Report will maybe help towards that because when the general public thinks that people don’t want the help, that people want to be on the street, well, then they’re not pushing for shelter,” Mikulec said.

“They’re not urging their elected officials to get something done because they think the problem is the people themselves who are on the street,” Mikulec continued. “So, they think that the solution is ‘forced this’ and ‘forced that,’ and jail and harassment. I think the biggest thing that needs to happen is that the truth needs to be out there that people do want help.”

Mikulec added that people don’t tend to feel safe in congregate shelters and that a tri-city approach among the three South OC cities of Dana Point, San Clemente and San Juan Capistrano, or an individual city approach to building a shelter would be optimal.

“The money exists, it’s just a matter of political will,” Mikulec said.

However, Mikulec noted that more funds needed to be spent on affordable housing and permanent supportive housing rather than just on shelters and outreach.

Services for Orange County’s homelessness cost the county an estimated $1.6 billion in the 2021 fiscal year, according to the Grand Jury report. Roughly half of that funding came from federal funds, with a quarter allocated from state funds and the remaining quarter coming from the county.

According to the report, Orange County spent approximately $30 million on shelter in 2021, roughly $5.58 million on outreach, and $910,062 on prevention while spending roughly $16.37 million on housing.

Countywide, the Grand Jury recommended that Orange County cities, the Continuum of Care, and the county collaborate on developing affordable housing for those exiting emergency shelters, increasing housing opportunity for youth aging out of the foster care system and opening “facilities that can house people with severe and persistent mental illness and addiction issues in a secure setting.”

The Grand Jury report also recommended that the Continuum of Care fund programs over the 2022-23 fiscal year for people with “severe and persistent mental illness and addiction issues to receive supervised care and treatment.”

“There is an immediate need for consistent case management and enforcement programs with consistent county support and data tracking,” Foley said. “As noted by the report, funding is available, but there is a lack of true collaboration with many cities, which has resulted in cities incurring the cost of addressing this issue or not addressing at all.”

Any public agency reviewed by a grand jury report must respond to its recommendations and findings. Municipalities within the South Service Planning have within 90 days of the report’s release to submit their responses.

The Grand Jury had intended for all South Service Planning Area (SPA) to respond to the report’s findings and recommendations.

“As an integral member of the South SPA, the City of San Clemente certainly would be involved in any planning, decision-making and action to be taken by that group of cities with respect to the OCGJ report,” the letter stated.

“In the meantime, the city will continue its efforts to site, fund and construct permanent supportive housing,” San Juan Capistrano’s City Manager Ben Siegel said in an email.

San Juan Capistrano has a 75-unit senior affordable complex on city-owned property nearing completion that will have 10 units for permanent supportive housing for seniors. Entitlements for an additional project with 50 units for permanent supportive housing was recently approved by the San Juan City Council, according to Siegel.

San Clemente city management did not respond to requests for comment.

The OC Board of Supervisors, the Office of Care Coordination, Continuum of Care Board and the majority of cities of Orange County are required to respond to the Grand Jury recommendations by Sept. 21.

Editor’s Note: This story has been updated to reflect the Grand Jury’s intention to also have the City of San Clemente respond to the report within 90 days.