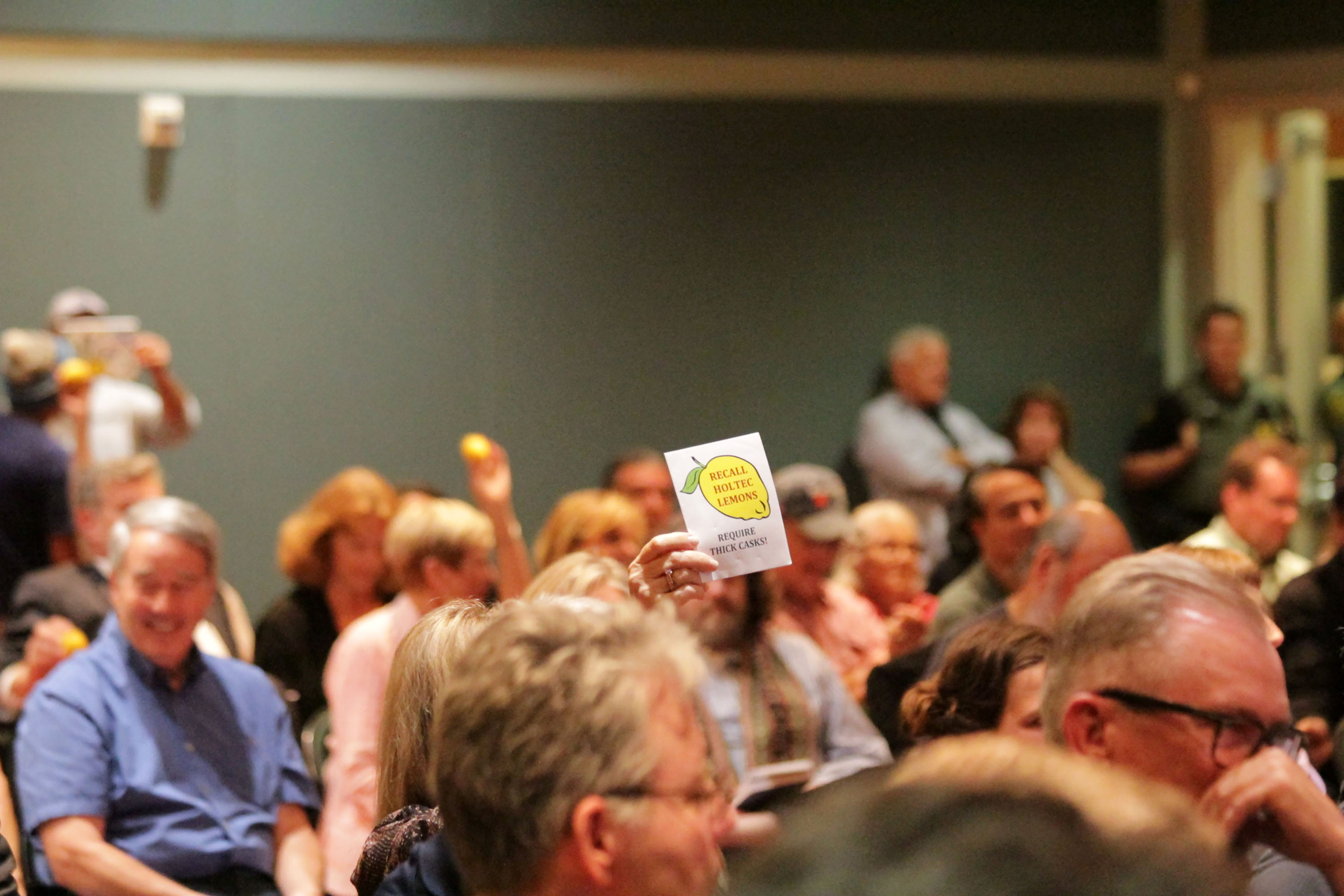 A community meeting on spent nuclear fuel storage somehow led to an audience member passing out a basketful of lemons, as well as the meeting’s facilitator telling an individual to “go back to his camera!”

The Nuclear Regulatory Commission held a town hall meeting at the San Juan Capistrano Community Center on Tuesday, Aug. 20 to provide updates on its oversight of the San Onofre Nuclear Generating Station (SONGS).

The forum comes more than a year after an incident involving a canister carrying spent nuclear fuel had occurred at SONGS. During the incident on Aug. 3, 2018, the canister was being placed into a vertical receptacle but wasn’t aligned properly, causing it to get stuck on a guiding ring.

Southern California Edison, the owner of the decommissioned power plant, and its contractor Holtec International, which built the canisters for spent fuel at SONGS, halted downloading operations, prompting a nearly yearlong effort to make corrective actions.

Edison has said that in the months following the incident, it had reviewed its transfer operations and adjusted its program to include updated procedures, implement “better training” and add “more intrusive oversight.”

The NRC penalized SCE with a fine of $116,000 this past March. Two months later, the Commission gave Edison the green light to start transferring spent fuel into dry storage again, determining that operations could be safely resumed.

Edison made the announcement last month that it had officially resumed its continuing efforts to place the plant’s nuclear waste into a dry storage facility.

During the town hall, members of the NRC panel reiterated that adequate measures have been taken since the canister incident. Greg Warnick, chief of the NRC’s reactor inspection branch, led a presentation on corrective steps taken in the past year.

“We are your public servants,” Morris said. “You deserve a strong independent nuclear regulator, and we achieve that by adhering to our principles of regulation.”

Throughout the town hall, Morris received the brunt of criticism and interruptions from the audience.

“To ensure that policies were developed and implemented correctly, starting at the beginning of July, the NRC has performed five unannounced inspections to review and observe all licensing activities,” said Warnick. “The NRC concluded that Southern California Edison could safely resume fuel transfer operations at SONGS in a manner that was compliant with regulatory requirements. The NRC continues to conduct rigorous oversight of license activities of the site and will routinely report inspection results to the public.”

A total of 49 speakers signed up to address the representatives of the NRC. 49th District Congressman Mike Levin, whose district includes San Juan Capistrano, San Clemente and Dana Point, kicked off the public-comment portion of the meeting.

“(San Onofre) is not your typical site because of the population density. Therefore, you shouldn’t have your typical protocol,” Levin said. “Restoring public trust requires that you take precautions that are not just adequate.”

Levin called for there to be inspectors for every canister that has to be loaded, not just the eight that have been inspected so far.

There are a total of 42 canisters left that need to be loaded. Work to load Canister 32 out of a total of 73 begins the end of this month.

Several of the speakers who addressed the NRC representatives expressed concerns over the thickness of the canisters, the lack of inspections for each canister, and the NRC’s abilities in holding SONGS accountable. The Holtec canisters on site are 5/8 inches thick. Several speakers called for canisters with a thickness of 10-20 inches.

“I’d like to invite the audience to come up and grab a lemon and give them to the NRC representatives to show that the Holtec system is a lemon,” one speaker said, holding a basket full of lemons. Dozens of audience members placed lemons at the desk of the panel speakers, where the lemons remained for the rest of the meeting.

An individual who had been taking photos and who identified himself as a member of Levin’s SONGS task force, yelled out at the facilitator, Chip Cameron, who was skipping over names on the list of 49 speakers and picking speakers at random. Cameron and the individual engaged in a verbal altercation before Cameron told the man to “go back to your camera.”

The meeting had originally been scheduled to end at 8:30 p.m., but it ended up running past 9:30 p.m. The town hall was unable to accommodate all 49 speakers.