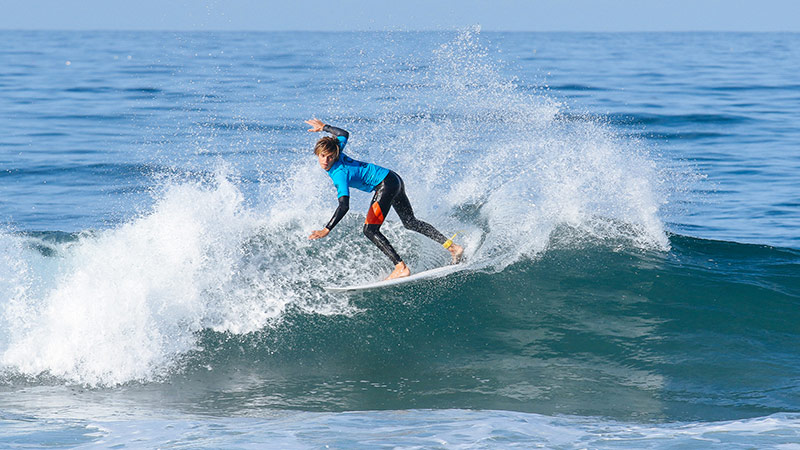 When it comes to being crowned a national champion in surfing, there’s more than one avenue to take. There’s the NSSA, the ISA, the WSA, the WSL, and that’s just for starters. A number of surf brands also hold annual national titles for kids, which brings us to the 2016 Rip Curl GromSearch National Championship.

Featuring a bounty of San Clemente’s finest wave-riding talent, the GromSeach National Championships landed last weekend at Seaside Reef in San Diego. Under gray, windless skies, a combination of small northwest and southwest swells intermingled to offer up playful three-foot surf for some of the best and brightest under-16 talent in America to do their thing. It was the culminating event after a series of summer qualifiers around the country, and surf towns from New Smyrna to Santa Cruz to Paia were all represented mightily.

Showing up with every intention of going the distance, 14-year-old Riviera regular Kade Matson went into the GromSearch with something to prove. While he’s had plenty of success in his brief competitive career, a national title has eluded him. Hoping to improve his chances at Seaside, this summer he battled hard and qualified for both the Under 14 and the Under 16 divisions. A worthy accomplishment, the only drawback was that while most of his competitors only had to focus on one division, he had to buckle down and do double duty all day on Saturday.

In the Under 14 division, Matson made a strong showing in both the opening round and semifinals, blitzing his way all the way into the final. In the Under 16’s, he aced his opening round heat and then slipped through the semifinals in second place. Landing in both finals, the Under 14 finale came first. It was a back-and-forth affair, but when the horn sounded, Matson found himself a quarter of a point out of first.

Somehow refocused and reenergized, he was not to be denied in the Under 16 final. He opened up an early lead thanks to an articulately surfed 8-point ride. He backed it up with a midrange score and then spent the rest of the final controlling the lineup through his deft use of the priority rules. When it was all over, Matson had done it. He was the 2016 Rip Curl GromSearch National Champion.

“This is my first national title so I’m super psyched. I usually end of getting second or third, so this feels really good,” beamed Matson from the podium.

When asked how he was able to pull everything together after such a heartbreaking defeat in his first final, Matson smirked and said, “I was in the 14’s final and ended up losing by nothing, so I went out there like I had nothing to lose. I was pretty much just free surfing and it worked out.”

For his effort, Matson took home a $500 check, but more importantly, he picked up an invitation to the Rip Curl International GromSearch final, which will be held at a yet-to-be-named surf break somewhere in the world. Rip Curl will pick up the tab for all of his travel, and considering the company’s tradition of seeking out world-class waves, he’s probably going to score.

“I’m stoked, I don’t know where it’s going to be, but I’m so stoked,” said Matson, as if he was ready to hop on a plane right then and there.

Other San Clemente standouts had a big impact at the GromSearch as well. In keeping with her current momentum on the NSSA circuit, Kirra Pinkerton went to work in the Girls Under 16 division. In a stacked final, she was edged out by reigning national champ Caroline Marks and Hawaii’s Brisa Hennessy, but took a very respectable third place.

On the boys’ side of the draw, Crosby Colapino joined Matson in the Under 14 final, where he finished third. And in the Under 12 division, Jett Schilling settled for second against Hawaiian hammer thrower Jackson Bunch.

The Rip Curl GromSearch first kicked off in 1999 with the goal of giving young surfers under 16 years old (generally referred to as “groms”), the opportunity to compete and hone their skills against their friends and peers. Today the series has spread around the world and culminates with an international final held at a different location each year. Former GromSearch national champions from San Clemente include Kolohe Andino (who’s currently ranked fifth in the world) and Kei Kobayashi.