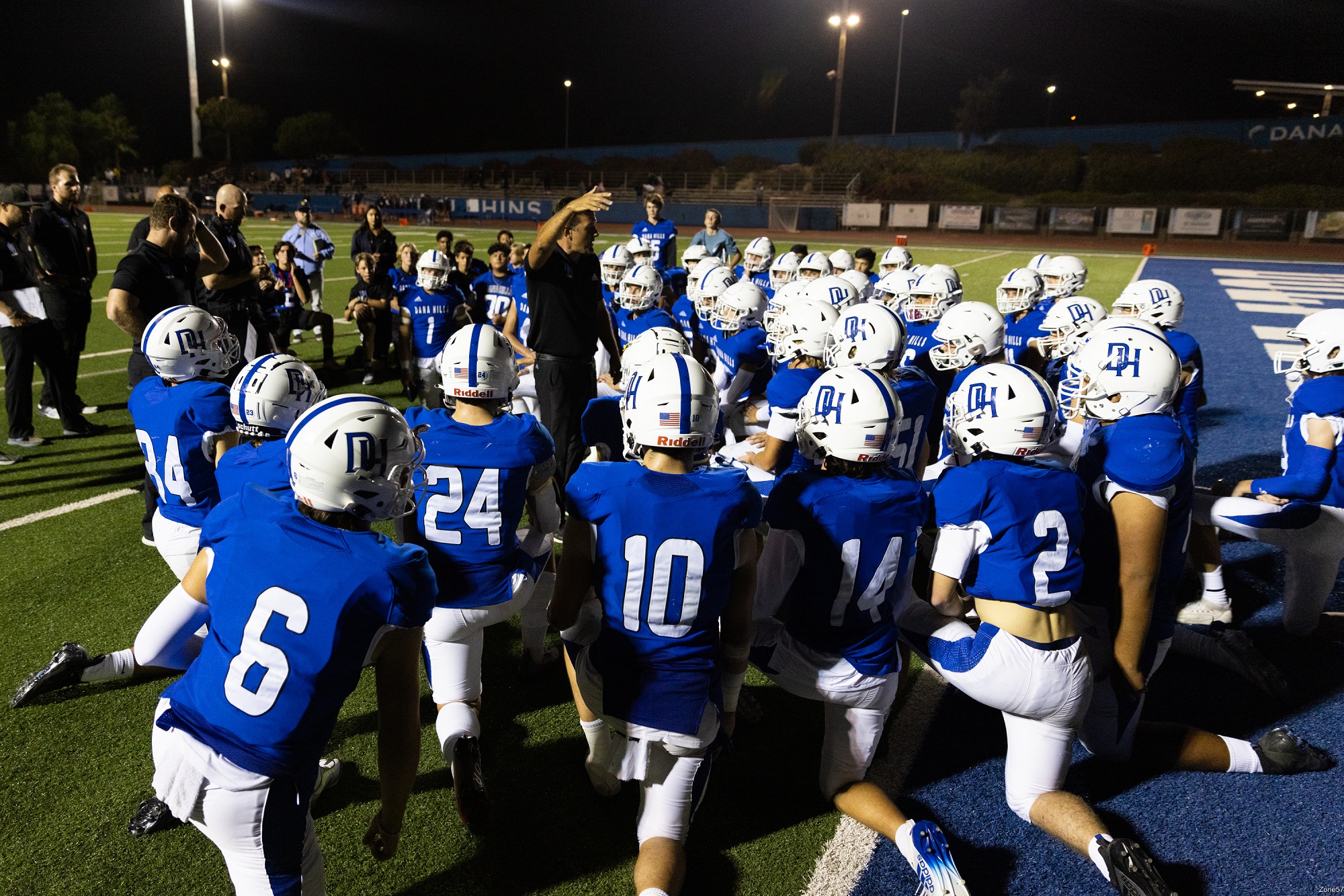 With a share of the Pacific Coast League title on the line, Dana Hills couldn’t put together a complete performance in a 37-20 loss at Northwood on Friday, Oct. 28, to end the regular season.

Northwood running back Adam Harper was unstoppable, as he bounced off tackles and wore down defenders in a 338-yard, four-touchdown performance on 33 carries.

Dana Hills (6-4, 1-2) had a shot to force a three-way tie for first place with a win and a Laguna Hills victory over Irvine, at which point coin flips would have decided the Dolphins’ playoff fate.

Now, they’ll apply for an at-large bid in the CIF-Southern Section and wait to see whether their season continues. If the Dolphins are selected, they’ll likely slot in Division 10.

“It just sucks to be in a situation where you don’t control your own destiny, and you have no idea how it’s going to swing,” said Dana Hills head coach Todd Henney.

He pointed to his team having a good resumé in having a winning record, beating three league champions (Pac-4 champion Laguna Beach and Pacific Hills League co-champions Portola and Woodbridge) and playing a schedule in which potentially eight opponents will play in the playoffs.

Dolphins receiver Noah Kucera kept his team afloat, hauling in six passes for 155 yards and one score on a night in which all of his receptions went for 15 yards or more.

An inability to consistently maintain and finish drives on offense and make tackles at the point of attack caused Dana Hills’ inevitable demise.

Harper opened the scoring on the first play from scrimmage, cutting back on a run play designed to go right and breaking through defenders for an 80-yard touchdown.

Northwood dominated the first half in terms of offensive yards, but the Timberwolves couldn’t muster enough conversions on third and fourth down to turn those yards into points and stretch its lead.

After a bizarre roughing-the-kicker penalty, in which Guarascio planted the punter into the ground rather than going for the easy block, the Timberwolves found themselves at the Dana Hills 14-yard-line. Northwood followed with a negative run on third down and an incomplete pass to turn the ball over on downs.

Placekicker Deacon Hill capitalized on both of his opportunities to ensure the Dolphins hung close at halftime.

Following Hill’s first field goal, from 38 yards out, a steady diet of Harper and big plays from QB Eugene Miyata guided Northwood right back down the field. Miyata found a sliding Andrew Penrod on a 20-yard rollout pass to push the Timberwolves’ lead to 11 points, 14-3.

After totaling 161 rushing yards in the first half, Harper and his offensive line kept on smothering the Dolphins’ front seven.

Northwood built a 27-12 lead after giving Harper seven consecutive touches on back-to-back drives for 115 yards and two scores. The latter drive featured a one-play, 68-yard jet sweep to the house.

Kucera took a slant 55 yards to the end zone in between those possessions.

After a Timberwolves field goal, Blaize Bolter added a 52-yard touchdown to cut the deficit to 10 points, 30-20, early in the fourth quarter. However, the Dolphins couldn’t get any closer, as Northwood finished the night with more of the same offensive attack. Harper’s bruising 26-yard run iced the game with 3:37 remaining.

Henney felt his defense improved from last week against Laguna Hills, but that the Dolphins offense didn’t execute to a level that helped the defense rest against such a tough opponent.

“Early when our defense had some stops (and) we were getting three-and-outs, we weren’t giving those guys much of a break,” Henney said. “Eventually a guy like that is going to make you pay for that stuff.”

Despite having opportunities to put a scare into the Timberwolves, Dana Hills did not capitalize after a Northwood fumble, converted only one of 13 third down attempts, and went 1-for-5 on fourth downs.

An inefficient passing game and a running game devoid of many big plays held down the Dolphins until it was too late to make an impact.

Christian Guarascio carried the ball 19 times for 81 yards and did not find the end zone. It was just the second time this season Guarascio, the county’s leading rusher entering the game, did not run for over 100 yards.

Regardless of the score, Henney praised the team’s effort in the wake of last week’s discouraging 42-21 loss against Laguna Hills.

“I hope we get a chance, because I think we’re a team that could be very dangerous in the playoffs,” said Henney. “I hope the draw goes our way.”