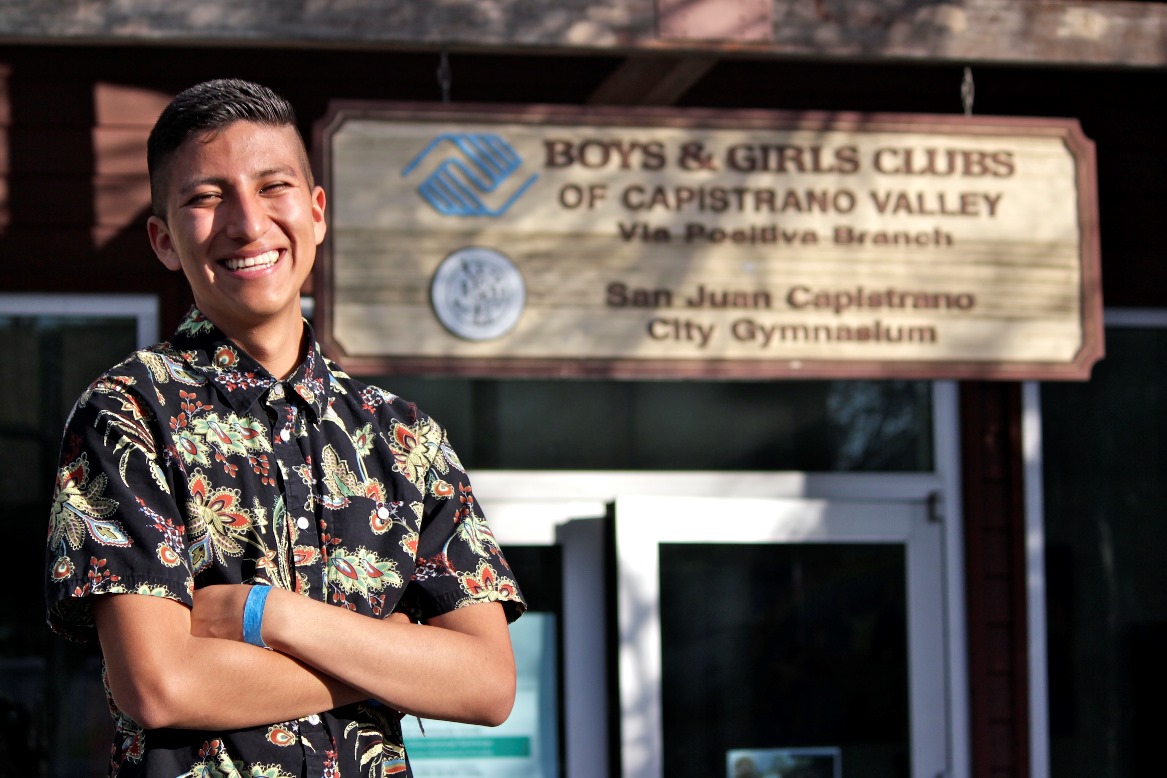 No Stopping This Kid

Back in the fall of 2000, on what was his first day of school at Del Obispo Elementary, young Yossymar Rojas was so frighteningly lost, he couldn’t utter his own name during morning roll call.

How could he? After all, English was still a new language to Rojas, who was born in Mission Viejo but only spoke Spanish at home with his parents, Luis and Lourdes, immigrants from Pueblo, Mexico.

So when the teacher and nearby students asked him, “What’s your name?,” all Rojas heard was jargon. What’s worse, he was in the wrong class.

“I spent the first two hours in the fourth grade and I didn’t know they were asking me for my name,” Rojas said. “Other kids started catching on and asked me my name in Spanish. That’s when they realized and took me to the kindergarten area.”

Just getting to school that morning had been a puzzling experience, said Rojas. His parents knew the bus—not the school’s but the Orange County Transportation Authority’s bus—would take their son in the general vicinity of the school, so they put him aboard and sent him on his way.

“My parents had no knowledge of the education system. They probably thought a teacher would be outside and say, ‘Welcome to Del Obispo Elementary,’” Rojas said. “I was completely confused.”

The first few weeks and months were “a blur,” Rojas said. By the third grade, he had made the transition from speaking intermittent English to speaking it with more fluency. But communication with teachers and schoolmates still proved challenging and made him a target for bullying.

“When I look back, it must’ve been because I was different. I couldn’t get my ideas across,” Rojas said. “The bullying led to a sense of shyness.”

Whatever reservations Rojas felt didn’t stop him from succeeding in the classroom, where he excelled in math and was placed into an accelerated course. By the time he reached the sixth grade at Marco Forster Middle School, Rojas, who’s known by friends and family as “Yossy,” had become fluent in English and more comfortable speaking with others.

It’s around that time that fate dealt Rojas a fortunate hand—or rather, the image of two hands clasped—in the form of the Boys & Girls Club.

Rojas’ parents, who both worked long and irregular hours—Luis as a restaurant busboy and Lourdes as a nanny—didn’t want their son walking home alone from school. Instead, they sent their son to the Boys & Girls Club of Capistrano Valley, just across the street from Marco Forster.

“I remember just looking at the club from the outside and seeing hundreds of kids walk in. Just because I was bullied as a kid, I thought anyone of the kids could bully me,” Rojas said. “In fact, they were all inviting and genuinely kind. I seriously think it was just a week in that I realized the kids were alright and the staff was amazing.”

To say Rojas simply did well at the Boys & Girls Club would be a gross understatement. As a member of the club’s teen program, Keystone, Rojas has become a leader among his peers and to the club’s younger members. Through Toastmasters, he’s shed any of his former shyness and has become an adept public speaker.

What’s more, Rojas has broken new ground at the club. In February, Rojas, now a senior at Dana Hills High School, was named the club’s Youth of the Year. In March, Rojas’ story of overcoming a language barrier, shyness and bullying earned him the county Youth of the Year honor—just the third member in the club’s history.

And it hasn’t stopped there.

Just this month, Rojas became only the second Capistrano Valley club member to win the state Youth of the Year award, beating out eight other contestants. Along with the award, Rojas received a $15,000 scholarship from the Boys & Girls Club of America, two round-trip tickets to anywhere in the country and an additional $10,000 scholarship from the California Youth of the Year Alliance.

In total, Rojas has received more than $27,000 in scholarship money. He’ll have a chance to add to that in July, when he faces off against eight other state Youth of the Year winners in the Pacific Region competition.

“This is one of the best highlights, not just for me, but for the entire club,” said James Littlejohn, who’s been the executive director of the Capistrano Valley club for 12 years. “I was able to learn a lot about Yossy throughout this process. The future is so bright for him, but he’s very humble. He knows where he wants to go, but he hasn’t forgotten where he comes from.”

Rojas has a small handful of people to thank for their help and mentorship, most notably his family and the staff at the Boys & Girls Club. It started with his older cousin Julio Moreno, who Rojas calls a “trailblazer” in his family. When Rojas was still learning English, Moreno, who is four years older and recently graduated from San Francisco State, tutored his cousin and helped him with his homework.

“He was always more of a brother,” Moreno said. “In a way, he’s kind of become the representation of our family and having contributed to that is such a great feeling. I’m very proud of him.”

Throughout the Youth of the Year process, which involves public speaking and interviews, Rojas had the advantage of having some experienced coaching on his side. His mentor, Navid Rastin, was a club member turned staff who won the county Youth of the Year award in 2007.

“We connected because he was so competitive, not just in the gym, but in everything,” Rastin said. “When he started high school, that’s when I started to see him really focus on what he was doing and where he wanted to go.”

Where Rojas is now is near the top of his class. Rojas has a 3.92 weighted GPA to his credit, along with nine Advanced Placement classes and four years of track and field and cross country. Where Rojas is going is UC Irvine, where he intends to study biomedical engineering.

“A simple explanation would be I’d help amputees,” Rojas said. “I’ve been taught that helping out people is an amazing thing, so biomedical engineering was something I was really interested in as a potential career.”

When he graduates in the spring, Rojas will become the first person in his family to earn a high school diploma. Lourdes Rojas said her oldest son has become a role model for her youngest children, Yaradset, 15, and Luis, 8.

“The values we instilled in him at a young age have made all the difference. I’m happy to see the seed we planted has borne fruit,” Lourdes Rojas said through her son.

“Looking back, I know I couldn’t have done everything without those people—my family and the Boys & Girls Club,” Rojas said.

Even after he moves on to college, graduates and continues along his upward path, Rojas said he’ll remain an active presence with the club. One of his goals, he said, is to become financially successful enough to support the club in the future.

“I want to make sure this club never closes its doors,” Rojas said. “If the Boys & Girls Club could change that shy and confused kid into the person I am today, they can do that with everyone.”