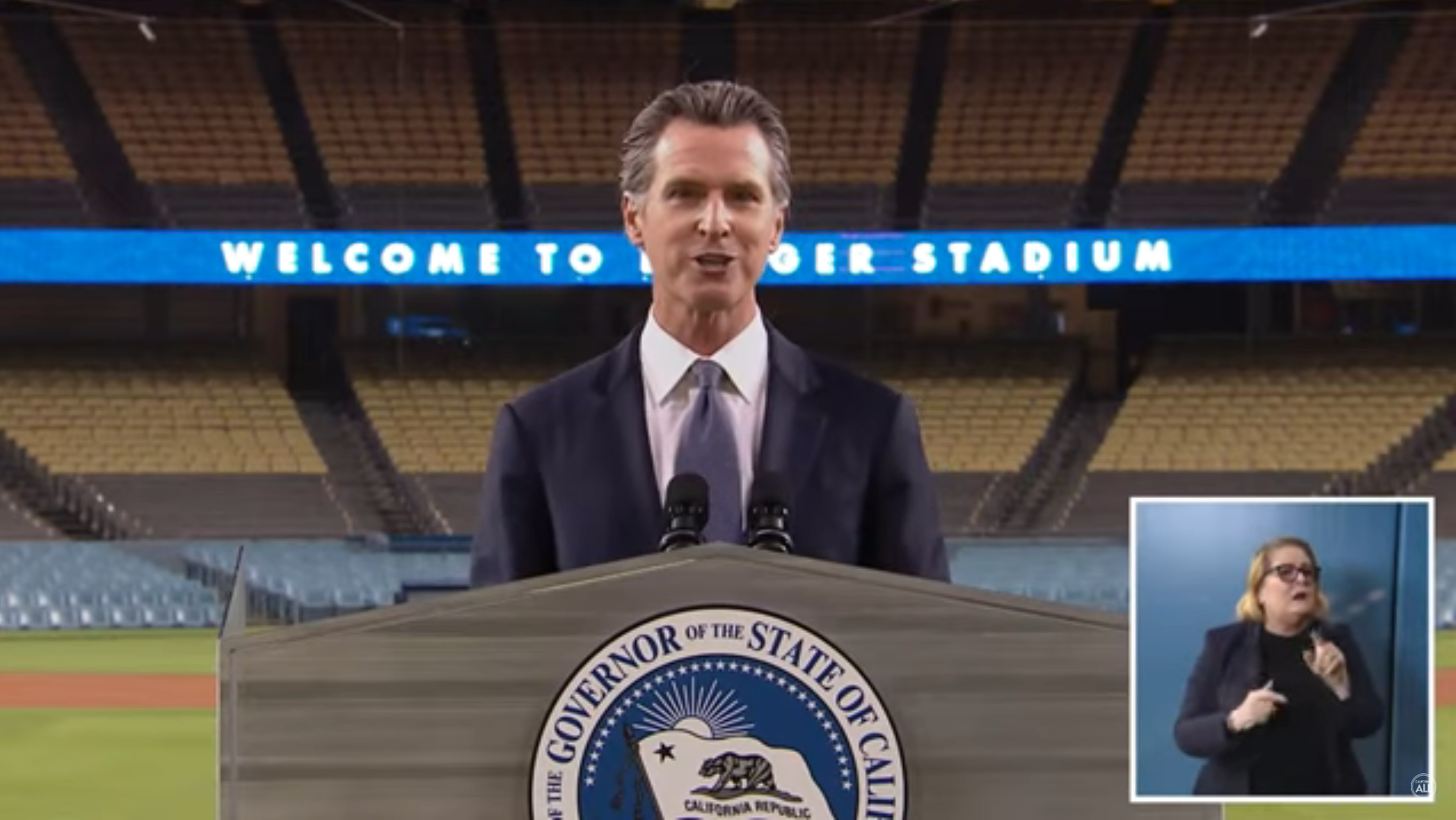 By Collin Breaux and Lillian Boyd

“COVID is no one’s fault. But it quickly became everyone’s burden,” Gov. Gavin Newsom said in the early remarks of his State of the State 2021 address on Tuesday, March 9.

Newsom stood in an empty Dodger Stadium in Los Angeles for his virtual address, acknowledging that the number of empty seats nearly added up to the 54,395 COVID-related deaths in California, marking a silent tribute to “loved ones lost, who live forever in our memory.”

In the roughly 30-minute speech, Newsom highlighted the initiatives and plans of action surrounding COVID-19 testing, vaccination for the virus and the challenges the pandemic has posed on equity and the economy.

“(California was) the first state to issue a stay-at-home order, which helped us avoid the early strikes of cases,” Newsom said. “While others competed to buy personal protective equipment at exuberant prices, we quickly built our own pipeline, supplying critical gear to millions and millions of essential workers.”

Newsom lauded the state’s COVID testing program, hospital preparedness for surges and the launching of mass vaccination sites in partnerships with FEMA. California ranks sixth in the world in vaccination distribution, ahead of countries not states, he stated.

“I know our progress hasn’t always felt fast enough. We’ve made mistakes. I have made mistakes,” Newsom said. “But we own them, we learn from them and we never stop trying. After all, that’s the California spirit.”

While Newsom didn’t spell out the specifics of his mistakes during the address, the Recall Gavin 2020 movement does.

On the official website, the movement lists out its reasons for the recall, including Newsom’s controversial dinner in November at The French Laundry, a three-Michelin star rated restaurant in Napa Valley—an incident that some locals see as hypocritical because Californians were urged against holding such gatherings at the time.

Just days before Newsom’s address, people strolled about downtown San Juan Capistrano on a sunny Saturday afternoon, while volunteers gathered signatures near the train tracks to remove Newsom from office.

Rick—who declined to give his last name—is a volunteer with the Recall Gavin 2020 campaign, a movement partly fueled by anger over the numerous business restrictions issued by the governor during the pandemic.

“First and foremost on my mind is the handling of the lockdowns and the blatant hypocrisy of the governor having his kids in private schools while everyone else—the majority of people in California—are not able to go to a school,” Rick said.

Though campuses in Capistrano Unified School District are partially open for in-person learning, many schools throughout the state are not. Newsom says he is working with education and state leaders on a plan for campuses to reopen. Additionally, during his address, he proposed to invest a record amount of funding for K-14 education.

The effort to recall Newsom was launched on June 10, 2020. Supporters have until Wednesday, March 17 to collect the 1,495,709 signatures needed to trigger a recall election. If supporters turn in enough valid signatures, the additional procedural steps dictate a recall election take place within 60 to 80 days of signature verification. Supporters say they are well on their way to that goal.

“I know he’s human, but he’s a leader of the most populous state in the union, and with greater populace, with greater influence, comes greater responsibility and a higher standard,” Rick said. “I don’t think he’s living up to the standard of a good leader with integrity.”

Vera Smith—who is based in Tustin and working in Orange County as authorized personnel for the campaign, meaning her duties include reviewing signatures and turning them over to the registrar of voters—said she’s taken issue with Newsom’s decisions throughout the coronavirus outbreak.

“He is destroying small businesses and is unreasonable when it comes to restaurants,” Smith said.

Families are losing their homes because businesses weren’t allowed to open, and prior restrictions on youth sports were “wrong and immoral,” she said. Newsom has been running the state through executive orders with no transparency, Smith said.

Petition tables and volunteers have been spotted at Dana Point Harbor and by San Clemente beaches. Smith said signatures are coming from tourists, including some from Los Angeles, where restrictions have made the city a practical “ghost town.”

“When we go to the beach, we are swamped,” Smith said. “By this point, almost everybody has seen one of our booths.”

Asked her response to news reports of the movement receiving financial contributions from wealthy donors and out-of-state residents, Smith said they have received donations from people in California and the majority of donations are under $200.

Smith also said there is a separate recall movement called Rescue California, which she did not want to speak for.

Randy Economy, a spokesperson for Recall Gavin 2020 who lives in the Coachella Valley in Cathedral City, said Newsom’s issued shutdowns were like “putting gasoline on an already sensitive wildfire.”

“I wish he wouldn’t have taken it upon himself to be the sole authority in this matter,” Economy said. “I wish he would have worked with members of the legislature on both sides of the aisle.”

When questioned on his response to the perspective that business restrictions were necessary for safety reasons, Economy said to tell that to the mom-and-pop businesses and bar and restaurant owners affected.

Economy said campaign volunteers are regular people, and just two people are on the payroll—one a treasurer and compliance officer, and the other being Economy. Residents in Orange County—a historically conservative stronghold—have made the movement “their own revolution,” Economy said.

Economy declined to endorse a new governor for now, though said the campaign may if a candidate emerges.

The certification process is expected to take until the end of April, after which state officials will also sign off on the results, Economy said.

NBC Los Angeles reports “procedure dictates that a recall election happen within 60 to 80 days of verification” and due to steps involved, “an election seems unlikely before October.”

In December 2020, a spokesperson for Newsom said then-President Donald Trump’s supporters were behind the recall effort, which he also said would cost the state $100 million and distract from efforts to distribute the COVID-19 vaccine and reopen schools.

Newsom was elected as California’s governor in 2018 with 61.9% of the vote. Since 1911, there have been 55 attempts to recall a sitting California governor, according to Ballotpedia. The only successful recall campaign was in 2003 when voters recalled then-Gov. Gray Davis.

While Newsom avoided directly addressing statewide efforts to recall him from his position as governor, he did address his critics.

“We aren’t going to change course just because of a few naysayers and doomsdayers,” Newsom said. “For the California critics out there, promoting partisan, political power grabs and outdated prejudices and rejecting everything that makes California truly great, we say this: We will not be distracted from getting shots in arms and our economy booming again. This is a fight for California’s future.”